History of the Philippines (pre-1521)

This article covers the history of the Philippines before the first arrival of Europeans in 1521.

Human fossil records indicate that the Philippines may have been inhabited for thousands of years. According to earlier archaeological findings, the first man in the Philippines came around islands with Asia which Professor H. Otley Beyer, eminent American authority on Philippine archeology and anthropology, dubbed the "Dawn Man". Yet the oldest human fossil found in the Philippines thus far is the 22,000-year-old skull cap of a "Stone-Age Filipino" discovered by Dr. Robert B. Fox, American anthropologist of the National Museum, inside Tabon Cave, Palawan, on May 28, 1962 and dubbed the "Tabon Man".

The Tabon caves of Palawan indicate settlement for at least 30,500 years; these hunter-gatherers used stone flake tools. (In Mindanao, the existence and importance of these prehistoric tools was noted by famed José Rizal himself, because of his acquaintance with Spanish and German scientific archaeologists in the 1880s, while in Europe.)

The custom of Jar Burial, which ranges from Sri Lanka, to the Plain of Jars, in Laos, to Japan, also was practiced in the Tabon caves of Palawan. A spectacular example of a secondary burial jar is owned by the National Museum of the Philippines, a National Treasure, with a jar lid topped with two figures, one the deceased, arms crossed, hands touching the shoulders, the other a steersman, both seated in a prao, with only the mast missing from the piece. Secondary burial was practiced across all the islands of the Philippines during this period, with the bones reburied, some in the burial jars. Seventy-eight earthenware vessels were recovered from the Manunggul cave, Palawan, specifically for burial.

Southeast Asia, as seen on the display globe at the Field Museum of Natural History, Chicago, Illinois

About 30,000 years ago, the Negritos, who became the ancestors of today's Aetas, or Aboriginal Filipinos, descended from their northernly abodes in Central Asia passing through the Indian Subcontinent and reaching the Andamanese Islands. From thereon, the Negritos continued to venture on land bridges reaching Southeast Asia. While some of the Negritos settled in Malaysia, becoming what is now the Orang Asli people, several Negrito tribes continued on to the Philippines through Borneo. They had a Paleolithic culture, and have no community life, government and laws, arts, science and technology, and writing and literature. They live a nomadic lifestyle, roaming the forests and living in crude dwellings consisting of leaves and sticks. But they were skillfully adept in using the bow and arrow as a primary defense weapon. They also gathered wild plants for consumption. haloo

After the last Ice Age, the sea level rose an estimated 35m (110 feet), which cut the land bridges, filling the shallow seas north of Borneo. Thus the only method of migration left was the dugout prao, built by felling trees and hollowing them out with adzes.

About 3000 BC, a loose confederation of peoples known as 'Nesiots', from what today is Indonesia, came to the Philippines. They were to become the ancestors of the present-day Luzon and Mindanao hill tribes. There were two waves of successive Nesiot immigration. The first wave saw a people who have light complexions, aquiline noses, thin lips, and deep-set eyes. The second wave of migration were shorter and heavier in physique, having darker complexion, thick lips, large noses, and heavy jaws. Those of the second wave of migration had epics and folk stories mixed with superstitions. From these people came the Luzon hill tribes. 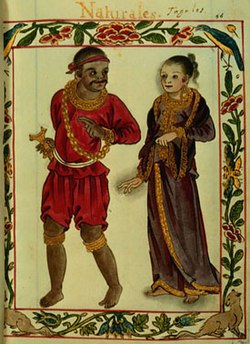 A Tagalog couple of the Maharlika nobility caste depicted in the Boxer Codex of the 16th Century. By the 9th century, a highly developed society had already established several castes with set professions, as well as trading links with China, India, Arabia and Japan.

Starting 4000-2000 BC [1] Austronesian groups descended from Yunnan Plateau in China and settled in what is now the Philippines by sailing using balangays or by traversing land bridges coming from Taiwan. Most of these Austronesians primarily used the Philippines as a pit-stop to the outlying Pacific islands or to the Indonesian archipelago further south. Those who were left behind became the ancestors of the present-day Filipinos. The Cagayan valley of northern Luzon contains large stone tools as evidence for the hunters of the big game of the time: the elephant-like stegodon, rhinoceros, crocodile, tortoise, pig and deer. The Austronesians pushed the Negritos to the mountains, while they occupied the fertile coastal plains.

One museum artifact, a ceremonial jade adze, almost 7 cm. long, of extremely fine workmanship, for such a fundamental tool, may indicate source for some of the wealth from the Philippines, since, in general, it is not known just what was traded by the sea-faring traders, except perhaps, porcelain, jade and gold.

The fragmented Philippine tribes built numerous city-states or barangays, in which a datu was the ruler. In the southern Islamic areas, sultanates were founded by Malayan and Arab princes and missionaries. Since at least the 3rd century, the indigenous peoples were in contact with other East Asian nations. They were, to varying extents, under the Sri Vijaya and Majapahit empires, Brunei, and other kingdoms of Borneo. Starting the 13th century, the independent city-states or barangays of the Philippines became vassals of the Ming Dynasty of China. A thalassocracy, or rule from the beaches prevailed.

In the earliest times, the items which were prized by the peoples included jars, which were a symbol of wealth throughout South Asia, and later metal, salt and tobacco. In exchange, the peoples would trade feathers, rhino horn, hornbill beaks, beeswax, birds nests, resin, rattan.2

The Laguna Copperplate Inscription is from 900 AD (Saka Era year 822) is considered to be the end of prehistory as far as documents are concerned. It was found in the Laguna de Bay of Manila. In 1989, the Philippines National Museum acquired it. The inscription forgives the descendants of Namwaran from a debt of 926.4 grams of gold, and is granted by the chief of Tondo (an area in Manila) and the authorities of Paila, Binwangan and Pulilan, which are all locations in Luzon. The words are a mixture of Sanskrit, Old Malay, Old Javanese and Old Tagalog. The subject matter proves the highly developed society that existed in the Philippines prior to the Spanish colonization, as well as refuting earlier claims of the Philippines being a cultural isolate in Asia; the references to the Chief of Medan in Indonesia claim the cultural and trade links with various other affiliated empires and territories in other parts of the Malay Archipelago. (See Nusantara) 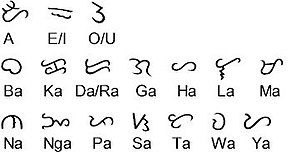 One example of pre-Spanish Philippine script on a burial jar, derived from Brahmi survives, as most of the writing was done on perishable bamboo or leaves; an earthenware burial jar dated 1200s or 1300s with script was found in Batangas. This script is called in Tagalog Baybayin or Alibata.

Around 1405, the year that the war over succession ended in the Majapahit Empire, Sufi traders introduced Islam into the Hindu-Malayan empires and for about the next century the southern half of Luzon and the islands south of it were subject to the various Muslim sultanates of Borneo. During this period, the Japanese established a trading post at Aparri and maintained a loose sway over northern Luzon.

In 1380, Makhdum Karim, the first Islamic missionary to the Philippines brought Islam to the Archipelago. Subsequent visits of Muslim Malay missionaries helped strengthen the Islamic faith of the Filipinos, most of whom (except for those in the south) would later become Christian under the Spanish colonization. The Sultanate of Sulu, the largest Islamic Kingdom of South East Asia and the Malay Archipelago, encompassed parts of Malaysia and the Philippines. The royal house of the Sultanate claim descent from the Prophet Muhammad.

Many scientists now believe that the Philippines once was a part of Mainland China. According to the scientists, during the Ice Age, the waters surrounding the Philippines dropped to about 156 feet below the present levels, exposing large bodies of land. These became land bridges connecting the Philippines to the Asian mainland. The Philippines, Out from the Bottom of the Sea? In February 1976, Dr. Fritjof Voss, a German scientist who studied the geology of the Philippines, questioned the validity of the theory of land bridges. He maintained that the Philippines was never part of mainland Asia. He claimed that it arose from the bottom of the sea and, as the thin Pacific crust moved below it, continued to rise. It continues to rise today. The country lies along great Earth faults that extend to deep submarine trenches. The resulting violentearthquakes caused what is now the land masses forming the Philippines to rise to the surface of the sea. Dr. Voss also pointed out that when scientific studies were done on the earth's crust from 1964 to 1967, it was discovered that the 35-kilometer- thick crust underneath China does not reach the Philippines. Thus, the latter could not have been a land bridge to the Asian mainland. The matter of who the first settlers were has not been really resolved. This is being disputed by anthropologists, as well as the theory of Professor H. Otley Beyer that the first inhabitants of the Philippines came from the Malay Peninsula. The Malays now constitute the largest portion of the populace and what Filipinos now have is a Malayan culture.

Anthropologist F. Landa Jocano of the University of the Philippines contends that what fossil evidence of ancient men show is that they not only migrated to the Philippines, but also to New Guinea, Borneo, and Australia. He says that there is no way of determining if they were Negritoes at all. However, what is sure is that there is evidence the Philippines was inhabited as early as 21,000 or 22,000 years ago. In 1962, a skull cap and a portion of a jaw, presumed to be those of a human being, were found in a Tabon Cave in Palawan Province. The discovery proved that man came earlier to the Philippines than to the Malay Peninsula; therefore, the first inhabitants of the former did not come from the latter. Jocano further believes that present Filipinos are products of the long process of evolutions and movements of people. This not only holds true for Filipinos, but for the Indonesians and the Malays of Malaysia, as well. No group among the three is culturally or racially dominant. Hence, Jocano says that it is not correct to attribute the Filipino culture as being Malay in orientation. According to Jocano's findings, the peoples of the prehistoric islands of Southeast Asia were of the same population as the combination of human evolution that occurred in the islands of Southeast Asia about 1.9 million years ago. The proofs of this are fossil materials found in different parts of the region and the movements of other peoples from the Asian mainland during historic times. He states that these ancient men cannot be categorized under any of the historically identified ethnic groups (Malays, Indonesians, Filipinos) of today. Some Filipino ethnic groups were pagans while others were Muslims. The pagans were converted to Christianity by the Spaniards. The Americans later arrived and introduced further cultural changes, which made the Filipinos more and more different from the peoples of other Southeast Asian countries.

The Philippines: Then and Now, new findings and studies regarding prehistoric Philippines.