History of the Philippines (1986-present)

This article covers the history of the Philippines following the EDSA Revolution of 1986.

With the EDSA Revolution of 1986, Corazon Aquino's assumption into power marked the restoration of democracy in the country. Aquino immediately formed a revolutionary government to normalize the situation, and provided for a transitional "Freedom Constitution" that restored civil liberties and dismantled the heavily Marcos-ingrained bureaucracy— abolishing the Batasang Pambansa and relieving all public officials. [1] The Aquino appointed a constitutional commission that submitted a new permanent constitution that was ratified and enacted in February 1987. [2] The constitution crippled presidential power to declare martial law, proposed the creation of autonomous regions in the Cordilleras and Muslim Mindanao, and restored the presidential form of government and the bicameral Congress. [3]

Progress was made in revitalizing democratic institutions and respect for civil liberties, but Aquino's administration was also viewed as weak and fractious, and a return to full political stability and economic development was hampered by several attempted coups staged by disaffected members of the Philippine military. [4] Aquino privatized many of the utilities the government owned, such as water and electricity. This practice was viewed by many as Aquino catering to oligarchic as well U.S. interests, losing the government's power of regulation.

Mount Pinatubo erupted in 1991. Ash covers the naval station following the eruption of Mount Pinatubo, a volcano which came to life in June 1991 for the first time in over 600 years.

Economic growth was additionally hampered by a series of natural disasters. In June 1991, Mount Pinatubo in Central Luzon erupted, after being dormant for 600 years. It was the 2nd largest volcanic eruption of the 20th century. It left 700 dead and 200,000 homeless, and cooled global weather by 1.5°C. [5]

In September 16, 1991, despite lobbying by President Aquino, the Philippine Senate rejected a treaty that would have allowed a 10-year extension of the U.S. military bases in the country. The United States turned over Clark Air Base in Pampanga to the government in November, and Subic Bay Naval Base in Zambales in December 1992, ending almost a century of U.S. military presence in the Philippines.

Early in his administration, Ramos declared "national reconciliation" his highest priority. He legalized the Communist Party and created the National Unification Commission (NUC) to lay the groundwork for talks with communist insurgents, Muslim separatists, and military rebels. In June 1994, Ramos signed into law a general conditional amnesty covering all rebel groups, and Philippine military and police personnel accused of crimes committed while fighting the insurgents. In October 1995, the government signed an agreement bringing the military insurgency to an end.

A standoff with China occurred in 1995, when the Chinese military built structures on Mischief Reef in the disputed Spratly Islands claimed by the Philippines as Kalayaan Islands.

Ramos was heavily criticized for passing an oil-deregulation law, thus inflating prices of gasoline products. Ramos was also criticized for alleged corruption in his handling of the Philippine Centennial Exposition and the PEA-AMARI land deal, in which Ramos allegedly received kickbacks amounting to millions of pesos. 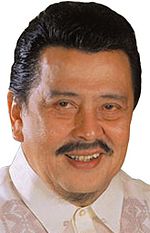 Under the cloud of the Asian financial crisis which began in 1997, Estrada's wayward governance took a heavy toll on the economy. Unemployment worsened, the budget deficit grew, the currency plunged. Eventually, the economy recovered but much slower than its Asian neighbors.

In late 1999, Estrada waged an all-out war against the separatist Moro Islamic Liberation Front in Central Mindanao, which displaced half a million people. In March 2000 the bandit group Abu Sayyaf abducted to Basilan 21 hostages, including 10 foreign tourists, from the Sipadan Island resort in neighboring Sabah, Malaysia. They were freed in batches after over $20 million ransom were reportedly paid by the Libyan government.

On November 13, 2000, the House of Representatives impeached Estrada on grounds of bribery, graft and corruption, betrayal of public trust and culpable violation of the constitution. His impeachment trial in the Senate began on December 7, but broke down on January 17 2001, after 11 senators allied with Estrada successfully blocked the opening of confidential bank records that would have been used by the prosecution to incriminate the President. In response, millions of people massed up at the EDSA Shrine, where in 1986 the People Power Revolution had ousted Marcos, demanding Estrada's immediate resignation. Estrada's cabinet resigned en masse and the military and police withdrew their support. On January 20, the Supreme Court declared the presidency vacant and swore in Vice President Gloria Macapagal-Arroyo as the country's 14th President. Estrada and his family evacuated the Malacañang Palace soon after.

Vice President Gloria Macapagal-Arroyo (the daughter of the late President Diosdado Macapagal) was sworn in as Estrada's successor on the day of his departure. Estrada later challenged the legitimacy of Arroyo's government, claiming he did not resign from office, but the Supreme Court twice upheld Arroyo's legitimacy. After Estrada was arrested on corruption charges in April 2001, thousands of his supporters staged an "EDSA III" to overthrow the Arroyo government, but the attempt failed when the protest rallies degraded into violence. Arroyo's accession to power was further legitimated by the mid-term congressional and local elections held in May 2001, when her coalition won an overwhelming victory. [6]

Arroyo's initial term in office was marked by fractious coalition politics as well as a military mutiny in Manila in July 2003 that led her to declare a month-long nationwide state of rebellion. [6] Although she had declared in December 2002 that she would not contest the May 2004 presidential election, citing a need to heal divisiveness, she reversed herself in October 2003 and decided to run. [6] She was re-elected and sworn in for her own six-year term as president on June 30, 2004.

In 2005, a tape of a wiretapped conversation surfaced bearing the voice of Arroyo apparently asking an election official if her margin of victory can be maintained. [7] The tape sparked protests calling for Arroyo's resignation. [7] Arroyo admitted to inappropriately speaking to an election official, but denied allegations of fraud and refused to step down. [7] Attempts to impeach the president failed later that year.

Arroyo currently spearheads a controversial plan for an overhaul of the constitution to transform the present presidential-bicameral republic into a federal parliamentary-unitary form of government. [8]