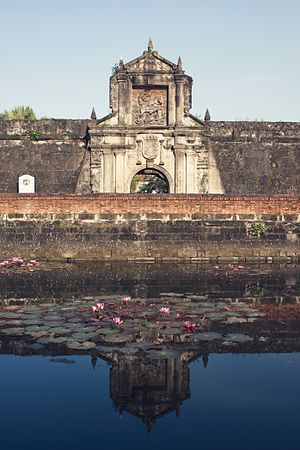 A Spanish Filipino is any citizen or resident of the Philippines who is of Spanish origin. They are represented in all levels of Philippine society and are integrated politically and economically, in the private and government sector.

The term Hispanic broadly refers to the people, nations, and cultures that have a historical link to Spain. It commonly applies to countries once part of the Spanish Empire, particularly the countries of Latin America, the Philippines, Equatorial Guinea, and Spanish Sahara. The Spanish culture and Spanish language are the main traditions.[6][7]

Between 1565 and 1898, Hispanics from Latin America and Spain sailed to and from the Philippine Islands. This contributed to the assimilation of the Hispanics into everyday society. According to an 1818 study by the renowned German ethnologist Fëdor Jagor entitled The Former Philippines thru Foreign Eyes, not less than one third of the inhabitants of the island of Luzon were descendants of Spaniards, mixed with varying degrees of South American, Chinese, and Indian ancestry and the vast majority of military personnel then had Latin-American origins.[8]

Template:Main article Spanish Philippines is the history of the Philippines from 1521 to 1898. It begins with the arrival in 1521 of European explorer Ferdinand Magellan sailing for Spain, which heralded the period when the Philippines was an overseas province of Spain, and ends with the outbreak of the Spanish–American War in 1898. 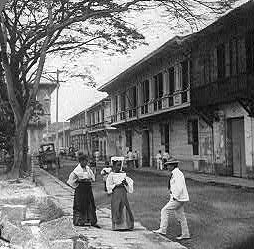 The Spanish East Indies (Indias orientales españolas) were the Spanish territories in Asia-Pacific from 1565 until 1899. They comprised the Philippine Islands, Guam and the Mariana Islands, the Caroline Islands (Palau and the Federated States of Micronesia), and for some time parts of Formosa (Taiwan) and the Moluccas (Indonesia). Cebu was the first seat of government, later transferred to Manila. From 1565 to 1821 these territories, together with the Spanish West Indies, were administered through the Viceroyalty of New Spain based in Mexico City.

Captaincy General of the Philippines

Template:Main article The Captaincy General of the Philippines (Template:Lang-es; Template:Lang-fil) was an administrative district of the Spanish Empire. The Captaincy General encompassed the Spanish East Indies which included the modern country of the Philippines and various Pacific Island possessions, such as the Caroline Islands and Guam. It was founded in 1565 with the first permanent Spanish settlements.

For centuries all the political and economic aspects of the Captaincy were administered in Mexico by the Viceroyalty of New Spain, while the administrative issues had to be consulted with the Spanish Crown or the Council of the Indies through the Royal Audience of Manila. However, in 1821, after Mexico became an independent nation, all control was transferred to Madrid. 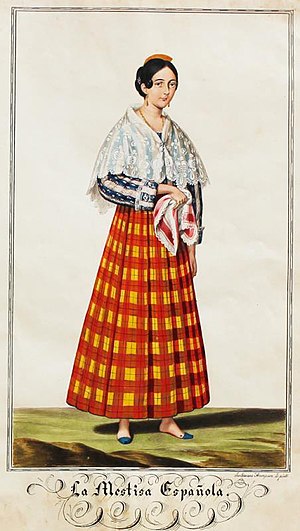 In Asia, the Philippines, a former Spanish overseas province, was the only Spanish-speaking sovereign nation. Spanish was the lingua franca of the country from the beginning of Spanish rule in the late 1500s until the first half of the 20th century. It held official status for nearly half a millennium before being demoted as an optional language in 1987. However, Spanish still remained a very important language up until the mid-20th century, with a gradual decline over the decades.[9] As of 2010, some groups were rallying to revive the language and make it a compulsory subject in schools.[10] Development of demand for Spanish speakers within the Call Center and Business Process Outsourcing industries led to its reinvigoration. Classes in the Instituto Cervantes are often full because of this.Template:CnTemplate:Clarify timeframe

Template:Main article Philippine Spanish (Spanish: Español Filipino, Castellano Filipino) is a Spanish dialect and a variant of Spanish spoken in the Philippines. Philippine Spanish is very similar to Mexican Spanish, because of Mexican and Hispanic American emigration to the Spanish East Indies (Philippines) over the years. It is spoken mostly among Spanish Filipinos.

Template:Main article Chavacano or Chabacano Template:IPA-es is a Spanish-based creole language spoken in the Philippines. The word Template:Wiktes is derived from Spanish, meaning "poor taste", "vulgar", for the Chavacano language, developed in Cavite City, Ternate, Zamboanga and Ermita. It is also derived from the word chavano, coined by the Zamboangueño people.

Template:Main article The Doctrina Christiana was an early book of Roman Catholic Catechism, written in 1593 by Fray Juan de Plasencia, and is believed to be one of the earliest books printed in the Philippines.[11] 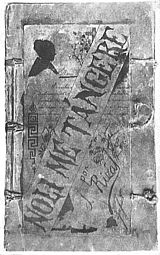 The original front cover of Noli Me Tangere

Template:Main article Noli Me Tángere (Latin for Touch Me Not) is a fictional novel written by José Rizal, one of the national heroes of the Philippines, during the colonization of the country by Spain to expose the inequities of the Spanish Catholic priests and the ruling government.

Originally written in Spanish, the book is more commonly published and read in the Philippines in either Filipino or English. Together with its sequel, El Filibusterismo, the reading of Noli is obligatory for high school students throughout the country.

Template:Main article El Filibusterismo (lit. Spanish for "The Filibustering"[12]), also known by its English alternative title The Reign of Greed,[13] is the second novel written by Philippine national hero José Rizal. It is the sequel to Noli me tangere and, like the first book, was written in Spanish. It was first published in 1891 in Ghent.

The novel's dark theme departs dramatically from the previous novel's hopeful and romantic atmosphere, signifying the character Ibarra's resort to solving his country's issues through violent means, after his previous attempt at reforming the country's system have made no effect and seemed impossible with the attitudes of the Spaniards towards the Filipinos. The novel, along with its predecessor, was banned in some parts of the Philippines as a result of their portrayals of the Spanish government's abuse and corruption. These novels along with Rizal's involvement in organizations that aim to address and reform the Spanish system and its issues led to Rizal's exile to Dapitan and eventual execution. Both the novel and its predecessor, along with Rizal's last poem, are now considered Rizal's literary masterpieces.

Template:Main article Mi Último Adiós (English; "My Last Farewell") is a poem originally written in Spanish by Philippine national hero Dr. José Rizal on the eve of his execution by firing squad on 30 December 1896. The piece was one of the last notes he wrote before his death; another that he had written was found in his shoe but because the text was illegible, its contents today remain a mystery.