Hilario Gelbolingo Davide Jr. GCSS (born December 20, 1935) is a former Ambassador/Permanent Representative of the Permanent Mission of the Republic of the Philippines to the United Nations in New York City.

On June 30, 2010, President Noynoy Aquino announced that Davide will head a truth commission that will investigate important issues in the country.[1]

He completed his primary education at Argao Central Elementary School and secondary education at Abellana Vocational High School. In college, he went to the country's premier state university, the University of the Philippines Diliman, Quezon City where he earned his Associate in Arts in 1955, his Bachelor of Science in Jurisprudence in 1958, and his Bachelor of Laws degree in 1959. He took and passed the bar examinations given that same year.

From 1959 to 1963, Davide worked as private secretary to the vice-governor and later governor of the province of Cebu.

From 1962 to 1968, he was a faculty member of the College of Law of Southwestern University in Cebu City. This university, three decades later, would confer on him a degree of Doctor of Laws (Honoris Causa) in 1999.

Davide's first opportunity to get into the national scene was when he was elected as Delegate of the 4th District of Cebu to the 1971 Constitutional Convention (CONCON). He became Chairman of the Committee on Duties and Obligations of Citizens and Ethics of Public Officials. He was among three delegates who introduced the most number of reform proposals. The reforms adopted under the Constitutional Convention were, however, short-lived. Public unrest over deteriorating economic conditions and the suppression of political rights, as well as the desire of then-President Ferdinand Marcos to perpetuate himself in power, heralded the declaration of martial law in 1972.

In 1978, he was elected assemblyman for Cebu in the Interim Batasang Pambansa under the opposition party Pusyon Bisaya and became one of martial law's staunch critics. As an oppositionist in the ruling party-dominated legislative body, he was its first Minority Floor Leader. He filed the most number of bills of national significance, as well as resolutions to lift martial law. He also sought legislative investigations of graft and corruption in government and reported violations of human rights.

After the overthrow of the Marcos regime through the People Power revolt in February 1986, then-President Corazon C. Aquino convened the Philippine Constitutional Commission of 1986 and appointed Davide as one of its 50 Commissioners.

In February 1988, President Aquino appointed Davide as Chairman of the Commission on Elections (COMELEC). He was the principal sponsor of the COMELEC's Rules of Procedure.

However, his stint in the COMELEC was cut short when President Aquino appointed him as Chairman of the Presidential Fact-Finding Commission to investigate the December 1, 1989 coup attempt in which military rebels meant to oust President Aquino. This presidential commission was tasked to conduct an investigation on the rebellion and the possible involvement of military and civilian officials and private persons. Furthermore, Congress passed Republic Act No. 6832 that enhanced the presidential commission's power through a broader Fact-Finding Commission to conduct a thorough investigation of the failed coup d’ etat and recommend measures to prevent the occurrence of similar attempts at a violent seizure of power.

On January 24, 1991, Davide was appointed by then-President Aquino as Associate Justice of the Supreme Court. From January 2, 1996 to August 30, 1997, he sat as a member of the Senate Electoral Tribunal. He was also the Working Chairman of the Court's Third Division from January 2, 1996 to September 7, 1997, and Chairman of the House of Representative Electoral Tribunal from September 1, 1997 to November 30, 1998. 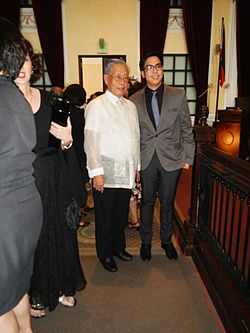 On November 30, 1998, he was appointed by President Joseph Estrada as the 20th Chief Justice of the Supreme Court of the Philippines. He took his oath of office at the new Bonifacio Shrine in the City of Manila. He became known as the Centennial and Millennial Chief Justice.

He was the presiding judge in the impeachment trial against then-President Estrada in December 2000. When the popular protests spilled into the streets, his timely intervention on behalf of "the welfare and will of the people" by administering the oath of office as President to then-Vice-President Gloria Macapagal-Arroyo. By declaring her the constitutional successor it averted potential violence and military takeover of power, and brought the crisis to an end. Although the moral authority of the Supreme Court carried the day, Davide's action was further bolstered by a precedent setting Supreme Court decision, effectively putting an end to the question of the legitimacy of Vice-President Arroyo's succession to power.Template:Citation needed

Chief Justice Davide, presiding the 2004 oath taking of Gloria Macapagal-Arroyo as President of the Philippines.

Davide retired as chief magistrate on December 20, 2005 after he reached the mandatory retirement age of 70.

However, on January 24, 2006, President Arroyo appointed him as Senior Presidential Adviser on Electoral Reforms during a Council of State meeting convened by the President. He recommended measures and policies to the President that would help reform the country's electoral system.

Davide served as Ambassador/Permanent Representative of the Permanent Mission of the Philippines to the United Nations in New York City. He assumed this post in February 2007. Shortly after his assumption, he was elected vice chairman of the Economic and Social Council (ECOSOC), one of the main organs of the United Nations. He resigned his post on April 1, 2010.[2]

In 2011 Davide was awarded one of the highest honours of the Holy See - the Knight Grand Cross of the Pontifical Order of St. Sylvester by decree of Pope Benedict XVI.

Hilario Davide is the recipient of many awards. In 2002, he was conferred the Ramon Magsaysay Award for Government Service—a singular honor that is the Asian equivalent of the Nobel Prize.Template:Citation needed He was recognized for his life of principled citizenship and his profound service to democracy and the rule of law in the Philippines.

In August 2006, he was conferred the ABA International Rule of Law Award in recognition of his extraordinary leadership in advancing the Rule of Law by the American Bar Association (ABA) Rule of Law Initiative on the occasion of the ABA's 2006 Annual Convention.

Jun, as many call him, is married to Virginia (Gigi) Jimenea Perez. They have five children, namely: Hilario Davide III (a lawyer, former city councilor of Cebu City and Governor of Cebu); Joseph Bryan Hilary (a law graduate), Sheryl Ann (a doctor), Noreen (a Master in SPED graduate), and Delster Emmanuel (an architect) and thirteen grandchildren.