From Wikipilipinas
(Redirected from Haribon)
Jump to navigation Jump to search 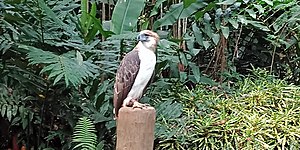 The Philippine eagle (Pithecophaga jefferyi) is one of the largest, rarest and most powerful birds in the world. It is also known as the monkey-eating eagle, the great Philippine eagle, the haribon or Haring Ibon (king of birds).

In 1995, Proclamation No. 615 by former president Fidel Ramos declared the Philippine eagle the national bird in place of the maya.[1][2]

The Philippine eagle can grow up to 1.021 meters from the tip of its bill to its tail and its eyes are a dusky blue color. This species' nests can be found in trees 120 feet from the ground.

Philippine eagle eggs are typically little smaller than a fist. Courting starts as early as July and the building of nests typically lasts from September to December. The female eagle becomes lethargic and refuses to eat eight to ten days before laying an egg. It will then lay an egg between the afternoon and twilight. Incubating the egg takes 58 to 68 days and both parents participate. After hatching, the chick remains in the nest for five months.

The Philippine eagle is considered the largest eagle in the world, but is second to the harpy eagle of South America in terms of weight.

John Whitehead first documented the Philippine eagle in 1896 in Samar. It was known then as the monkey-eating eagle based on the assumption that its diet is comprised exclusively of monkeys. This assumption was to be disproven as the eagle evidently also eats lizards, small cats, chickens, bats, deer, smaller birds of prey, rats, and snakes.

On 16 December 1986, during a congregation of the British Ornithologists' Club at London, Ogilvie Grant described the Philippine eagle and dubbed it with the scientific name Pithecophaga jefferyi, derived from the Greek words "pithecus" for "monkey" and "phagien" for "eater." The name “jefferyi” commemorates Jeffry Whitehead, John Whitehead's father.

The Philippine eagle can be found on four islands in the Philippines - Luzon, Samar, Leyte, and Mindanao.[3] It is the top predator in forests within its territory, earning it the monicker 'king of birds'.

Each mating pair of Philippine eagles needs a vast hunting range in order to raise one chick. Deforestation is thus devastating the entire species.

Fledgeling Philippine eagles at play have been observed to grip knotholes with their talons, balancing with their tails and wings during flight, and peeking their heads into holes in trees. Younglings are also known to attack inanimate objects and practice hanging upside-down from branches. The parents are assumed to play no part in the training of a fledgeling because they are absent whenever a fledgeling practices these activities.

Philippine eagles live for 30 to 60 years.

The Philippine eagle is considered to be a critically endangered species.[4] It is listed in the International Union for Conservation of Nature (IUCN) with an estimated number of only 400 pairs left in the wild.[3] Numbers have been decimated by deforestation that leads to loss of hunting grounds that eagles need to raise offspring.

In 1992, a chick named Pag-asa (Hope) was hatched in captivity and has become a symbol of nature preservation. It died on 6 January 2021.[6]