Guimaras [ɡimaˈɾas] (Hiligaynon: Kapuoran sang Guimaras; Kinaray-a: Probinsiya kang Guimaras; Tagalog: Lalawigan ng Guimaras) is an island province in the Philippines located in the Western Visayas region. Its capital is Jordan. The province is situated in the Panay Gulf, between the islands of Panay and Negros. To the northwest is the province of Iloilo and to the southeast is Negros Occidental. The whole island is part of the Metro Iloilo-Guimaras, one of the twelve metropolitan areas of the Philippines.

The province consists primarily of Guimaras Island, and also includes Inampulugan, Guiwanon (or Guiuanon), Panobolon, Natunga, Nadulao, and many surrounding islets.[1] GeologistsTemplate:Who have concluded that the island once formed one landmass with Panay.

Guimaras, formerly known as Himal-us, was a sub-province of Iloilo until it was made an independent province on May 22, 1992.

About 1581, Gonzalo Ronquillo de Peñalosa, Spanish governor and Captain-General of the Philippine Islands, established a settlement in Guimaras for the purpose of Christianizing the island's natives. He and his subordinates organized the pueblicitos or villages of Nayup under the patronage of Saint Peter the Apostle, and Igang with Saint Anne as patroness.

Evangelization of Guimaras occurred around the same time the friars were making inroads in Panay. The Augustinians established the visitas (chapelries) of Nayup and Igang as subordinate to Oton, Iloilo. Gómez Pérez Dasmariñas, the 7th Spanish Governor-General, noted in a 20 June 1591 report to King Philip II that the friars of Oton made regular visits to the island.

In 1742, the island came under the jurisdiction of Dumangas – now known as Iloilo, until 1751 when the Augustinian Order was replaced by the Jesuits, after which the Dominican order took over Guimaras. The Jesuits, who had established a school in Iloilo and had missions in Molo and Arevalo, took charge of the island. By 1755, it was organized into a regular parish. When the population increased considerably, the island was given its municipal status with a seat of government at Tilad (today Buenavista).

Under American rule, the Guimarasnons were given the opportunity to elect their municipal president in 1908.[2]

Douglas MacArthur, a fresh graduate from West Point as a Second Lieutenant at the age of 23, came to Iloilo as the head of the company of U.S. Army Corps of Engineers. They constructed roads and the Santo Rosario Wharf, presently named MacArthur's Wharf, which are still in use today. In November 1903, while working on Guimaras, he was ambushed by a pair of Filipino brigands or guerrillas; he shot and killed both with his pistol.[3]

In 1942, Japanese Imperial forces landed on Guimaras Island as the Empire of Japan began its occupation of the country during the Second World War.

In 1945, the combined United States and Philippine Commonwealth forces landed on Guimaras Island, attacking the Japanese and defeating them in the Battle of Guimaras, which led to the liberation of the island.[4]

Guimaras gained its status as a sub-province of Iloilo through Republic Act 4667,[5] which was enacted by Congress on 18 June 1966. It was proclaimed as a regular and full-fledged province on 22 May 1992 after a plebiscite was conducted to ratify the approval of its conversion pursuant to Section 462 of R.A. 7160.[6]

Guimaras comprises primarily of Guimaras Island, and the minor islets of Inampulugan, Guiwanon (or Guiuanon), Panobolon, Natunga, Nadulao and many more. The province covers a total area of 604.57 square kilometres (233.43 sq mi) occupying the southeastern section of the Western Visayas region.

The province has 5 municipalities. There is only one legislative district of Guimaras which encompasses all five towns. 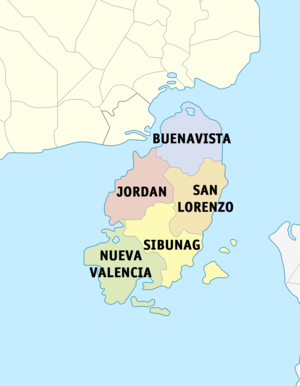 The people of the province, called Guimarasnon, speak Hiligaynon and Kinaray-a as the primary languages, as it was once a sub-province of Iloilo. Filipino and English are widely spoken and understood.

Guimaras is well known for its agricultural crops, particularly the mangoes, where some +50,000 of these trees are planted. The island province is famous for producing one of the sweetest mangoes in the world, thus earning the nickname "Mango Capital of the Philippines" from local and foreign tourists. Guimaras mangoes are reportedly served at the White House and Buckingham Palace.[9][10][11] Guimaras' largest event of the year is the Manggahan Festival (the Mango Festival).[12] The variety of mangoes produced are also best for making dried mangoes, jam and other special delicacies.

From Guimaras, a view of Iloilo City across the Iloilo Strait.

Located southeast of Panay, Guimaras is separated from Iloilo by the Iloilo Strait, a narrow channel which takes about twenty to twenty-five minutes to cross by pump boat from Ortiz in Iloilo City to Jordan, Guimaras. Other ferries leave from the Parola wharf in Iloilo to Buenavista. The Parola wharf is used exclusively during rough weather conditions especially by ferries from Jordan-Ortiz. A roll-on/roll-off ferry travels around five times a day but is mostly used to transport cargoes such as sacks of charcoals and root crops from Guimaras to Iloilo.

There is also a pump boat service connecting the town of San Lorenzo to Pulupandan in Negros Occidental.