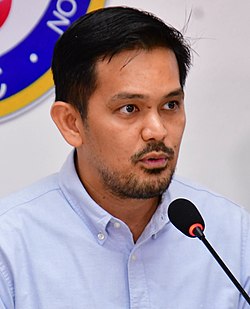 Greco Belgica (born 27 March 1978) is a Filipino public servant and Chairman of the Presidential Anti-Corruption Commission (PACC). The PACC hears and investigates administrative cases against presidential appointees in the executive branch of the government.

Belgica was born on 27 March 1978 in Manila to Dr. Carmelita Banta and Grepor “Butch” Belgica, the current Presidential Adviser for Religious Affairs. His younger brother, Atty. Jeremiah Belgica, is the Director General of the Anti-Red Tape Authority.

Greco graduated from San Beda University with a degree on Marketing and Commerce and from the University of California in Berkeley for his Post Graduate Studies on International Trade and Commerce. He was also part of the only 42 graduates who completed the pioneer class of the Executive Master of Arts in National Security (E-MNSA) at the National Defense College of the Philippines.

He is a member of the Fraternal Order of Eagles.

He served as councilor of the 6th District of Manila from 2004 to 2007. He ran as candidate in the 2013 Senate Election under the newly-accredited Democratic Party of the Philippines, but failed to win a seat. He ran again for a Senate seat in 2016, but failed again.

Among Belgica’s campaign promises were:

Belgica serves as an Elder of the Lord’s Vineyard Church and President of the Yeshua Change Agents, a nongovernment organization with anti-drug campaigns and projects on the reconstruction of society to its Biblical form.

He was host to the following TV shows:

Belgica filed his certificate of candidacy (COC) for Senator on 8 October 2021.