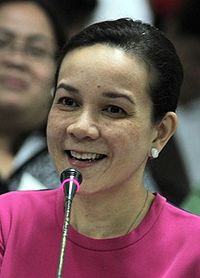 Mary Grace Natividad Sonora Poe-Llamanzares (baptized 3 September 1968) is a politician, businesswoman, and former teacher. She is serving her second term as a senator, having been reelected in 2019. She served her first term from 2013 to 2019. In 2016, she unsuccessfully ran for president, earning the third-highest number of votes.

Poe is the adopted daughter of actors Fernando Poe Jr. and Susan Roces.[1]

Mary Grace Natividad Sonora Poe-Llamanzares was found abandoned on 3 September 1968 in Iloilo City, in the holy water font of Jaro Metropolitan Cathedral.[2] The parish priest named her Grace. She was baptized by Jaime Sin, then the Archbishop of Jaro.[3]

Poe was initially adopted by the family of Sayong Militar, with her brother-in-law, Edgardo Militar, signing Poe’s foundling certificate. [4]Edgardo was supposedly the person who found Poe in the Cathedral and was later on said to be possibly her biological father.[5] Poe’s given name on her original certificate is Mary Grace Natividad Sonora Militar. Sayong Militar subsequently passed Poe on to her friend Tessie Ledesma Valencia, a childless and unmarried heiress of a sugar baron from Bacolod, Negros Occidental.

Valencia was friends with actors Fernando Poe Jr. and Susan Roces. She would take Grace with on her trips to Manila, where the Poes lived. Valencia eventually decided to let Grace be adopted by the Poes as she prepared to migrate to the US.[6]

Poe was given the name Mary Grace Natividad Sonora Poe after she was legally adopted by the Poes.[7]

Poe received her elementary education from St. Paul College Pasig and St. Paul College Makati. She attended Assumption College San Lorenzo for her secondary education. She initially enrolled at the University of the Philippines Manila as a development studies major and subsequently transferred to Boston College, where she graduated with a degree in political science in 1991.[8]

Poe returned to the Philippines after her father, Fernando Poe Jr., announced his presidential bid in the 2004 elections. Following his controversial defeat to Gloria Macapagal-Arroyo[9], Grace Poe returned to the United States. She came back to the Philippines in December 2004 after her father suffered a stroke, to which he would succumb. After these events, Grace Poe and her family decided to permanently settle in the Philippines, returning to the country on 8 April 2005.[10]

On October 10, 2010, Poe was appointed chairperson of the Movie and Television Review and Classification Board (MTRCB) by President Benigno Simeon Aquino III. During her term, she promoted the protection of the welfare of child and female actors.[11] She also opposed censorship and restrictions on freedom of expression.[12]

Poe successfully ran for senator in the 2013 election, garnering the highest number of votes. Although she was an independent candidate, she ran under the banner of the Team PNoy coalition of President Benigno Simeon Aquino III.[13] She was also a guest candidate of the leftist Makabayang Koalisyon ng Mamamayan.[14]

Immediately after assuming office as a senator during the 16th Congress, Poe filed a bill that aimed to attract local and international filmmakers and to encourage them to use the country as a primary location for their projects.[15] She is the author of the “Sustenance for the Filipino Child” bill, which seeks to provide nutritious food to children enrolled in public schools.[16] She also filed the “first 1000 days” bill, which aims to provide protection and support to FIlipino children during their first 1,000 days.[17]

On 17 May 2018, Poe was one of the 14 senators who voted in favor of a resolution that called on the Supreme Court to review its decision to grant the quo warranto petition to Chief Justice Maria Lourdes Sereno and oust her.[19] The following month, she voted in favor of a national ID system.

In 2019, Poe was the chair of the Senate committee that granted a telecommunication franchise to Mislatel, a company composed of China Telecom and businessman Dennis Uy’s Udenna Corp and Chelsea Logistics.[20] The approval was met with criticism because of concerns raised about the threats that the company’s operations were said to pose to national security as well as possible violations of Philippine franchise laws.[21]

Poe was re-elected senator in the May 2019 elections.

Poe ran for president in the 2016 presidential election. In June 2015, she topped a presidential preference poll by Pulse Asia, overtaking the previous favorite Jejomar Binay,[22] who was the vice president at the time. She declared her candidacy on 16 September 2015 at the Bahay ng Alumni of the University of the Philippines Diliman. Her running mate, Francis Escudero, was at the event too to announce his bid for the vice presidency.

Poe’s presidential aspirations were challenged by Navotas representative and United Nationalist Alliance interim president Toby Tiangco,[23] who in June 2015 said that Poe did not satisfy the 10-year residency requirement for a presidential bet. The Commission on Election' (COMELEC) second division disqualified Poe as a presidential candidate in December 2015,[24] citing her failure to meet the 10-year residency requirement. Later in that month, the COMELEC’s first division disqualified her too. The COMELEC en banc formally disqualified Poe from running for president on December 23, 2015.[25] Poe appealed the decision with the Supreme Court, which issued two restraining orders against the decision of the COMELEC en banc.[26]

Voting 9-6 on March 8, 2016, the Supreme Court affirmed Poe’s 10-year residency and natural-born status.[27] A natural-born Filipino, she became a naturalized citizen of the United States on 18 October 2001.[28] After reacquiring her Filipino citizenship, she renounced her American citizenship in October 2010,[29] as required by RA 9225.

The Supreme Court declared its ruling on Poe’s presidential bid as final and executory on 9 April 2016.[30]

Rodrigo Duterte was the declared winner in the 2016 presidential election.