Ginataan, alternatively spelled guinataan, is a Filipino term which refers to food cooked with gatâ (coconut milk).[1] Literally translated, ginataan means "done with coconut milk". Due to the general nature of the term, it can refer to a number of different dishes, each called ginataan, but distinct from one another.

There are other dishes that are known by their own unique names, such as Bicol Express, laing and variants of pinakbet, which nonetheless fall under the ginataan category because they use coconut milk as one of the main ingredients.[6][7]

Various sweet desserts may also simply be called ginataan, especially in the northern Philippines.[1] For example, the Visayan binignit, a soup made with coconut milk, glutinous rice, tubers, tapioca pearls, and sago is simply called ginataan in Tagalog (a shortened form of the proper name, ginataang halo-halo).[8] This soup is also called "giná-tan" in Bikolano, "ginettaán" in Ilokano, and "ginat-ang lugaw" in Hiligaynon. If gummy balls made of pounded glutinous rice are used instead of plain glutinous rice, it becomes a dish called ginataang bilo-bilo or simply bilo-bilo.[9] Ginataang mais is another example of a dessert soup; a warm, sweet, thick gruel made with coconut milk, sweet corn and glutinous rice.[10]

Dishes considered under the ginataan category include the following: 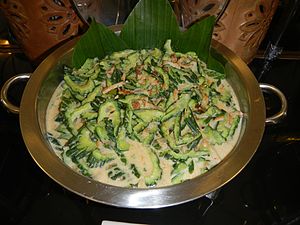 Laing (taro leaves with meat or seafood in coconut milk)