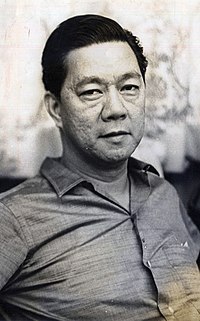 Gil Puyat (September 1, 1907 – March 23, 1980) was the first elected Filipino senator in 1951. He served as the Philippine Senate President and was married to Eugenia Guidote who bore him seven children. Gil Puyat came from a rich family. His father, Don Gonzalo, was one of the first successful Filipino entrepreneurs who created one of the largest businesses in the country.

Because of his father and his early exposure to business, Gil Puyat had a keen interest in commerce which he pursued for his tertiary education. He studied commerce in the University of the Philippines where he graduated as one of the best in his class. His scholarship in his field of expertise allowed him to become a professor in UP, in the department of economics. He also succeeded his father in managing the family business. He was named the dean of UP’s College of Business Administration.

Puyat’s successful management of his own family’s business made him one of President Manuel Quezon’s favorites. At the time, the Philippines was attempting to industrialize itself, and Quezon believed that an active member in various international trade groups would be useful in transforming the generally agricultural country into a fully industrialized one. The fact that Puyat was the youngest dean in the UP system, and the recipient of various awards such as the Civic Leader of the Year from the Association of Red Feather Agencies, Business Leader of the Year from the Business Writer’s Association of the Philippines, and Outstanding Service as Founder for the Community Chest of Greater Manila also helped bolster Puyat’s rise to politics.

Puyat’s achievements allowed him to win a seat in senate from 1951 to 1973. In the last six years of his term in senate, he also served as the Senate President. One of his landmark works in politics was the creation of various legal reforms concerning public work funds.

Three years after being invested as a member of the Order of St. Gregory the Great, Puyat died due to cardiac arrest, one of the complications of an asthma attack. He was buried at the Loyola Memorial Park in Marikina.