Gapan is nicknamed the "Footwear Capital of the North" due to the thriving footwear making industry in the city.

Old records called the town Ibon.Template:Citation needed Gapan was founded by the Spanish curates and officials who, in their early occupation, exercised great influence over the people and the things they were doing. History places Gapan as one of the first towns of Pampanga founded sometime in the middle part of the sixteenth century. Records of the first Catholic mission to the far east indicated that in 1595, Fathers Contres Tendilla, Caballo and Salazar were responsible for clearing the forest which later became a pueblo. In this pueblo, a church, presedencia and residential houses made of bricks and lime were constructed, now the age-old landmarks of the city.

Its foundation in 1595 makes Gapan the oldest town in Nueva Ecija and one of the oldest in the Philippines. It was likewise a big pueblo embracing an area as far as Cabanatuan City in the north, which was its barrio with the name Cabanatuan before it separated in 1750: the Sierra Madres in the East, San Miguel, Bulacan in the south and Candaba, Pampanga in the West. Gradually as the Spanish power waned and economic progress caught up in the area, the pueblo disintegrated into many pueblos until it remained to comprise only the towns of Peñaranda, General Tinio and San Leonardo (formerly called Manikling) all of Nueva Ecija province. In fact the Patron Saint Divina Pastora had its origin or residence in Barrio Callos, Peñaranda.

By virtue of Republic Act No. 9022 and its ratification in a plebiscite subsequently held on August 25, 2001, Gapan was converted into a component city of Nueva Ecija. Ernesto L. Natividad became the first city mayor of Gapan.

Gapan is located in the southern part of the province. It is bounded to the north by Peñaranda and San Leonardo, to the east by the Gen. Tinio, to the south by San Miguel in neighboring Bulacan province, and to the west by San Isidro.

Gapan is politically subdivided into 23 barangays.

The city of Gapan held tremendous promise not only in its natural resources but also in its potentials in agri base industries and in footwear industries which help sustain its virtual role in agricultural and industrial production. Commercial and trade activities in the city are further accelerated by the influx of financing lending institution and new businesses. 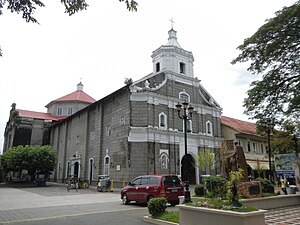