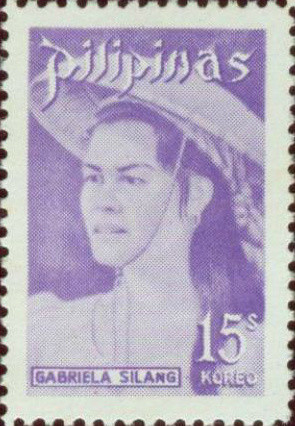 Gabriela Silang on a 1974 stamp of the Philippines

María Josefa Gabriela Cariño Silang (March 19, 1731-September 29, 1763), or Gabriela Silang, was the first Filipino woman to lead a revolt during the Spanish colonization of the Philippines. An active member of the insurgent force of Diego Silang, her husband, she led the group for four months after his death before she was captured and executed.

Born in Caniogan, Ilocos Sur, Silang was a mestiza of Filipinos of Spanish and Ilocano descent. She was adopted by a wealthy businessman who later married her at the age of 20, but left after three years. In 1757, she married again, this time to 27-year-old indigenous Ilocano rebel leader, Diego Silang. She became one of his closest advisors, a major figure in her husband's collaboration with the British and the brief expulsion of Spanish officials in Vigan, Ilocos Sur.

On May 28, 1763, her husband was assassinated by order of royal and church authorities in Manila. After her husband's death, she fled on horseback to the mountains of Abra to establish her headquarters, reassemble her troops, and rally the Tingguian community to fight. They descended on Vigan on September 10, 1763. But the Spanish garrison was ready, amassing Spanish, Tagalog, and Kapampangan soldiers and Ilocano collaborators to ambush her and rout her forces. Many were killed. She escaped, alongside her uncle Nicolas and seven other men, but was later caught on September 29, 1763. They were summarily hanged in Vigan's plaza, with Gabriela being the last to die.

Her ferocity and death became a symbol for Filipino women, their pre-colonial importance in Filipino society and their struggle for liberation during colonization.