To read this article in Filipino, see this. 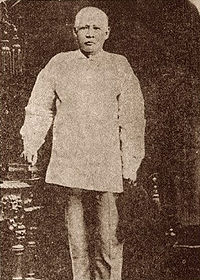 Francisco Engracio Rizal Mercado y Alejandro (11 May 1818 to 5 January 1898) belonged to the fourth generation of Domingo Lam-co, a Chinese immigrant in the late 1600s. He married Teodora Alonso Realonda y Quintos, a Manileña who came from a well-known family. They were blessed with 11 children, one of which was José Rizal.

In 1690, Lam-co migrated to the Philippines. He is the son of Siang-co and Zun-nio, who were from the village of Sionque in the Chin-Chew district in Fujian, China.

When he was 35 years old, Lam-co was baptized and welcomed into the Catholic church, thus acquiring “Domingo” as his first name. His baptism was held at the San Gabriel Church in Binondo, Manila.

He married Ines de la Rosa, a Chinese mestiza from a consumerist family. She was half Lam-co’s age then. Furthermore, Lam-co had a close relationship with two Spanish friars, Father Francisco Marquez and Father Juan Caballero. These two friars encouraged him to reside in the Dominican estate of San Isidro Labrador in Biñan, Laguna. Lam-co helped develop the water irrigation in the area, thus making it one of the wealthiest parts of the estate.

In 1731, de la Rosa gave birth to Francisco Mercado. The name "Francisco" was derived from a friar’s name, while "Mercado" is a Spanish word, which means “market.” He also resided in Biñan, Laguna.

In 1771, Francisco married Bernarda Monica, a native of San Pedro Tunasan near Biñan. The couple had two sons, Juan and Clemente. They decided to move to Calamba, but Chinese immigrants were not well accepted during that time. With this, they were forced to return to Biñan. In 1783, he was elected as gobernadorcillo (municipal mayor) of the town. He also often stood as godfather in baptisms and weddings.

Like his father, Juan was also elected as capitan del pueblo of the town in 1808, 1813, and 1823. He married Cirila Alejandro, a Chinese mestiza. They had 13 children and lived in a large stone house in Biñan. Juan died when his son, Francisco Engracio, was eight years old.

Francisco Engracio helped his widowed mother in running the family business. He studied Latin and philosophy at the Colegio de San Jose in Manila. He then married Teodora Alonso Realonda.

He raised his family by rented lands from the Dominican Order. From that land, they produced rice, corn, and sugarcane. They even raised poultry in their backyard. His son Jose Rizal described him as a model of fathers. He passed away in Manila on 5 January 1898.