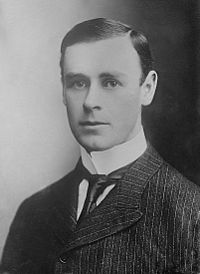 Harrison was born in New York City, the son of Burton Harrison, a lawyer who was the private secretary to Confederate president Jefferson Davis, and his wife, the former Constance Cary, who became well-known as a novelist and social arbiter under the name Constance Cary Harrison. He also was, through his mother, a great-grandson of Thomas Fairfax, the ninth Baron Fairfax of Cameron, a well-known Virginia planter, as well as a relative by birth and marriage to some of the founding families and founding fathers of the United States, including Gouverneur Morris (his great-great-uncle), Thomas Jefferson, Robert E. Lee, the Randolphs, the Ishams, and the Carters.

He graduated from Yale University in 1895 as a member of Skull and Bones, and from the New York Law School in 1897. From 1897 to 1899, Harrison was an instructor in the New York Night Law School. He later left to serve in U.S. Army during the Spanish-American War, first as a captain and later as an assistant adjutant general. He married, as his first wife, the California railroad and mining heiress Mary Crocker on June 7, 1900; she died five years later in an automobile accident, leaving him with two small daughters. Harrison would marry and divorce five more times before his death. His wives included Mabel Judson Cox, Elizabeth Wrentmore, Margaret Wrentmore, Doria Lee and Maria Teresa, a young Filipino woman who outlived him.

Harrison began his political career when he was elected as a Democrat to the U.S. House of Representatives, representing the 13th district of New York. He served from March 4, 1903, to March 3, 1905. In 1904, Harrison ran unsuccessfully for Lieutenant Governor of New York.

Harrison left the house after his term finished and practiced law. He later returned to the House in 1907, having been elected from the 16th district. This tenure was noted for the passage of the Harrison Narcotics Tax Act on December 17, 1917. This time he served several terms, resigning on September 1, 1913 to become Governor-General of the Philippines, a position he held until 1921. In 1920, Harrison was a candidate for the Democratic nomination in the presidential election.

After leaving the Governor-General post, he resided in Scotland until 1934. He was appointed adviser to the Manuel L. Quezon, the first president of the Commonwealth of the Philippines in November 1935, a position he held for ten months. In May 1942 was again appointed to the same position.

From November 1946 to February 1947, Harrison served as United States Commissioner of Claims in the civil service of the U.S. Army in Manila. He later served as an adviser to the first four presidents of the Philippine Republic after their independence was granted in 1946. Harrison later resided in Spain for six years, returning to Califon, New Jersey, in August 1957;

Harrison died in Flemington, New Jersey, and was interred in the Manila Cemetery in Manila.