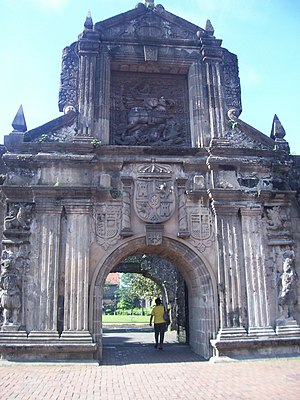 Fort Santiago (Fuerza de Santiago) is a defense fortress built for Spanish conquistador, Miguel López de Legazpi. The fort is part of the structures of the walled city of Intramuros, in Manila, Philippines.

The first fort was made out of log structures and earth. Most of it was destroyed in the Spanish-Chinese War of (1574-1575), by invaders of ethnic Chinese pirates who besieged the area. The Spaniards fought a bloody conflict and eventually drove the pirates out. In 1589 the fort was constructed by hard stone and finished in 1592. It became the main fort for travels and spice trade to the Americas and Europe for 333 years. The famous Manila Galleon trade to Acapulco, Mexico started sailing from Fuerza de Santiago.

The fort is shielded by 22 meter high walls, with a thickness of 8 meters and an entrance measuring 40 meters high. It is located at the mouth of the Pasig River and it was once the premier defense fortress of the Spanish Government in the Philippines.

The location of Fort Santiago was also once the site of the palace and kingdom of Rajah Suliman, chieftain of Manila of pre-Spanish era. It was destroyed by the conquistadors upon arriving in 1570, encountering several bloody battles with the Muslims and native Tagalogs. The Spaniards destroyed the native settlements and erected Fuerza de Santiago in 1571.

During the Japanese Occupation

During World War II, Fort Santiago was captured by the Japanese. They soon discovered the use of the dungeons and sent many Philippine freedom fighters to there death by either torture or execution. The bottom dungeons were also affected by the tide, so drowning in cells was not uncommon.

Today the fort is one of the finest tourist attraction in Manila which serves as a museum and houses well-preserved legacies of the Spanish Government, a replica of Jose Rizal’s prison cell set up supposedly before he was executed (which is called the Plaza de Armas), Rizal Shrine, and the prison dungeons for criminals used by the Spanish Officials.

José Rizal, the country's national hero, was imprisoned here before his execution in 1896.