Fishballs are a dish popular in southern China, Hong Kong, Macau, Iceland and Taiwan, as well as in parts of Southeast Asia among the overseas Chinese communities. They are made with fish paste and boiled in a soupy broth, or deep fried. They are also common in the Nordic countries.

There are two variants of fish balls, each differing in their textures, production method and primary regions they are produced in:

In the Fuzhou area, "Fuzhou fish balls" (福州鱼丸) are made from fish with a minced pork filling. The variation from Fuqing is much larger. 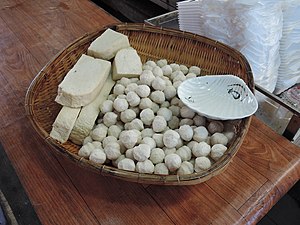 There are three kinds of fishballs, known as Template:Zh (literally "fish eggs"), sold in Hong Kong and Macau. They are yellow, white and golden.

Fishballs are a popular street food in Hong Kong and the 2016 Mong Kok civil unrest, which escalated from the government's crackdown on unlicensed street hawkers during the Chinese New Year holidays have been referred to by some media outlets and social media platforms as the "Fishball Revolution" (Template:Zh).

Smaller in size, made from cheaper fish than the white variety, they are usually sold at food stalls with five to seven balls on a bamboo skewer. The fish balls are usually boiled in a spicy curry sauce. Virtually every street stall creates its own recipe of curry satay sauce to differentiate them from other sellers. Fish balls are one of the city's most popular and representative "street foods".[1]

White fish balls are larger in size and made with white fish such as Spanish mackerel, pounded many times until the fish is a fine paste. Salt can be added, or egg whites and corn starch, but generally no other ingredients are added. The balls are then cooked by boiling. As a result of this cooking method, these fish balls are white in color. White fish balls should have an elastic (bouncy) and fluffy texture and a strong taste of fish. They are made using a more costly fish, and has a considerably different texture and taste. This kind is usually served to complement noodles at Cháozhōu-style noodle restaurants,[2] and at some cha chaan tengs, which also sell beef balls (牛丸) and cuttlefish balls. Readily available in traditional markets and supermarkets, fish balls are also a popular ingredient for hot pot.

White fish balls from traditional fish ball restaurants are made from fresh fish and are normally hand-made (手打) by the owners using traditional techniques.

The big golden fish ball is a snack in Cheung Chau. Distinguishing features include size, sauce and texture. They can be fist-sized and are served with a special curry sauce, and are mainly made from fresh fish which makes the texture more smooth.

The basic ingredients are fish, flour and flavourings such as salt and sugar, can also be used. The proportions depend on the quality and type to be made. The white fish balls found in some traditional Hong Kong restaurants are made using fresh fish; while street style are made using cheap fish and a mixture of flour to reduce costs.[3] Flathead mullet and Daggertooth pike conger are common choices.

Originally, to reduce costs, they were likely made by mixing and frying the remaining materials of Chaozhou fish ball (潮州白魚丸) or stale fish. More recently, they began to be imported and nowadays, they are mainly imported by wholesalers and the texture is more consistent.[4]

Milkfish balls (虱目魚丸) are frequently found in Taiwan. The natural texture and aroma of the milkfish give this variant a unique taste. This is one of the main ways milkfishes' lesser-prized yet highly abundant white meat is consumed.

Fish balls with roe (魚包蛋) contain egg filling that are served at hot pot restaurants. It has sweet and salty taste with a popping element from the roe's texture. There is also a fried golden version.

In Indonesia, fish balls are called bakso ikan (fish bakso). The most popular bakso are made of beef, but fish bakso is also available, served with tofu, vegetables and fish otak-otak in clear broth soup as tahu kok. Bakso ikan has softer texture and lighter color compared to beef balls. Bakso ikan might be thinly sliced as additional ingredients in mie goreng, kwetiau goreng, nasi goreng and cap cai. A similar dish made of fish surimi is called pempek, however most of pempek are deep fried instead of boiled.

Fish balls, known as 鱼圆 (yú yuán) or 魚丸 (yú wán), are cooked in many ways in Malaysia and Singapore. They can be served with soup and noodles like the Chiuchow style or with yong tau foo (酿豆腐). They can also be served with noodles called mee pok. In some cases it is also fried, and served on a stick.

Fish balls are a popular street food in the Philippines, and considered a cultural delicacy. The most common type of Filipino fish balls are known as bola-bola. They are round in shape, most often made from cuttlefish or pollock, and served with a sweet and spicy sauce or with a thick, black, sweet and sour sauce.

A recent trend in the industry is the introduction of varieties: chicken, squid (cuttlefish actually), and elongated versions of fishballs inaccurately called "kikiam". The latter, however, are completely different dishes from true kikiam (a Filipino version of Hokkien ngo hiang).[5][6]

Fish balls are very popular in Thai cuisine. They are usually fried or grilled as a snack. In Chinese-influenced restaurants, fish balls are cooked in noodle soups and come in many varieties. They can also be eaten in a Thai curry. Kaeng khiao wan luk chin pla is green curry with fish balls. One of the main fishes used in the production of fish balls in Thailand is Pla krai (Chitala ornata).

Known as Fiskbullar in Sweden and fiskeboller in Norway and Denmark, Nordic fish balls are white and without breading, and usually come in metal cans or transparent plastic containers containing stock or brine.

In the Faroe Islands, fish balls are called knettir and are made with ground fish and mutton fat.

In Norway, fish balls are a staple food commonly served with potatoes, carrots and/or cauliflower or broccoli in a white sauce. Sauce is often made with the stock from the container, sometimes with mild Madras curry seasoning as condiment, or mixed to create curry-sauce. Adding ketchup to the sauce is commonplace among children.

In Sweden, they are normally served with mashed potatoes or rice, boiled green peas and dill, caviar or seafood sauces.

Italian fish balls, known locally as polpette di pesce, are fried with parmesan and breadcrumbs, and usually served with a tomato sauce. They can be found both as rounded balls and as patties.