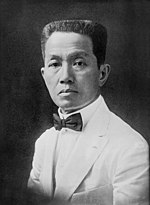 Emilio Aguinaldo, first and only president of the First Philippine Republic

The First Philippine Republic, officially República Filipina (English: Philippine Republic) was the government of the Philippines formally established with the proclamation of the Malolos Constitution on January 23, 1899 in Malolos, Bulacan until the capture and surrender of Emilio Aguinaldo to the American forces on March 23, 1901 in Palanan, Isabela, which effectively dissolved the First Republic.

A session of the Malolos Congress on the Barasoain Church.

Guards and soldiers of the revolutionary army during a session of the congress.

The republic was formed after the events of the Philippine Declaration of Independence. It adopted the Constitución política de la República Filipina, drawn up by the Philippine Constitutional Convention in the Barasoain Church in Malolos in 1899 to replace the dictatorial government set up by the Pact of Biak-na-Bato in 1897. It was approved by Aguinaldo and ten delegates to the Assembly of Representatives on January 21, 1899. The convention earlier elected Aguinaldo president on January 1, 1899, leading to his inauguration on January 23 on the same year.