In the Philippines, Filipino Mestizo or colloquially Tisoy, are people of mixed native Filipino and any foreign ancestry.[1] The word mestizo itself is of Spanish origin; it was first used in the Americas to describe only people of mixed Native American and European ancestry.[2]

Template:Main article Template:See also The Spanish expedition in 1565 prompted a period of Spanish colonization over the Philippines which lasted for 333 years. The Roman Catholic Church played an important role in allowing Spanish settlements in the Philippines. The Spanish government and religious missionaries were quick to learn native Filipino languages and Roman Catholic rituals were interpreted in accordance with Filipino beliefs and values. As a result, a folk Roman Catholicism developed in the Philippines.[3] European settlers from Spain and Mexico immigrated and their offspring (of either pure Spanish, or mixed Spanish with Native Filipino) may have adopted the culture of their parents and grandparents. Most Filipinos of Spanish descent in the Philippines are of mixed ancestries or some few are of pure European ancestry.Template:Citation needed Some few families still privately use Spanish in some households, in addition, Chavacano (a creole language based largely on the Spanish vocabulary) is widely spoken in the Southern Philippines, especially in the Zamboanga Peninsula and its neighboring regions. Spanish era periodicals record that as much as one-third of the inhabitants of the island of Luzon possess varying degrees of Spanish admixture.[4] In addition to Luzon, select cities such as Bacolod, Cebu, Iloilo or Zamboanga which are home to historical military fortifications or commercial ports during the Spanish era also holds sizable mestizo communities.[5]

Initially, many of the Chinese who arrived during the Spanish period were Cantonese or Taishanese, who worked as laborers, but there were also Hokkienese, who entered the retail trade and now currently make up most of the Chinese Filipino population. The Chinese residents of the islands were encouraged to intermarry with other native or Spanish Filipinos, convert to Roman Catholicism, and adopt Hispanic names, surnames and customs through the Catálogo alfabético de apellidos introduced by the Spaniards in the mid-19th century.

After the Second World War and the victory of the Communists in the Chinese Civil War, many refugees who fled from Mainland China settled in the Philippines. These groups in the 20th century formed the bulk of the current population of Chinese Filipinos.[7] After the Philippines achieved full sovereignty on 4 July 1946, Chinese immigrants became naturalized Filipino citizens, while the children of these new citizens who were born in the country acquired Filipino citizenship from birth.[8]

The history of racial mixture in the Philippines occurred on a smaller scale than other Spanish territories in Americas during the Spanish colonial period from the 16th to the 19th century. This ethno-religious social stratification schema was similar to the casta system used in Hispanic America, with some major differences.

The system was used for taxation purposes, with indios and negritos who lived within the colony paying a base tax, mestizos de sangley paying double the base tax, sangleys paying quadruple; blancos, however, paid no tax. The caste system was abolished after the Philippine Declaration of Independence from Spain in 1898, and the term "Filipino" was expanded to include the entire population of the Philippines regardless of racial ancestry. 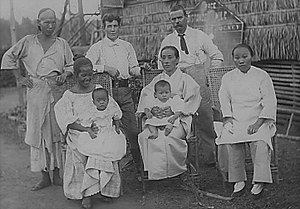 A Native Filipina with Caucasians (probably Europeans or Americans),Chinese, and Japanese settlers in the Philippines, circa 1900

The Spanish deliberately implemented incentives to entangle the various races together to stop rebellion:[12][13][14]

The indigenous peoples of the Philippines were referred to as Indios (for those of pure Austronesian descent) and negritos. Indio was a general term applied to native Austronesians as a legal classification; it was only applied to Christianised natives who lived in proximity to the Spanish colonies. Persons who lived outside of Manila, Cebu, and areas with a large Spanish concentration were classified as such: naturales were baptised Austronesians of the lowland and coastal towns. Unbaptised Austronesians and Aetas who lived in the towns were classified as salvajes (savages) or infieles (infidels). Remontados ("those who went to the mountains") and tulisanes (bandits) were Austronesians and Aetas who refused to live in towns and moved upland. They were considered to live outside the social order as Catholicism was a driving force in everyday life as well as determinant of social class.

The fluid nature of racial integration in the Philippines during the Spanish colonial period was recorded by many travelers and public figures at the time, who were favorably impressed by the lack of racial discrimination, as compared to the situation in other European colonies.

Among them was Sir John Bowring, Governor General of British Hong Kong and a well-seasoned traveler who had written several books about the different cultures in Asia. He described the situation as "admirable" during a visit to the Philippines in the 1870s:

"The lines separating entire classes and races, appeared to me less marked than in the Oriental colonies. I have seen on the same table, Spaniards, Mestizos (Chinos cristianos) and Indios, priests and military. There is no doubt that having one Religion forms great bonding. And more so to the eyes of one that has been observing the repulsion and differences due to race in many parts of Asia. And from one (like myself) who knows that race is the great divider of society, the admirable contrast and exception to racial discrimination so markedly presented by the people of the Philippines is indeed admirable."[16]

Another foreign witness was English engineer, Frederic H. Sawyer, who had spent most of his life in different parts of Asia and lived in Luzon for fourteen years. His impression was that as far as racial integration and harmony was concerned, the situation in the Philippines was not equaled by any other colonial power:

"... Spaniards and natives lived together in great harmony, and do not know where I could find a colony in which Europeans mixes as much socially with the natives. Not in Java, where a native of position must dismount to salute the humblest Dutchman. Not in British India, where the Englishwoman has now made the gulf between British and native into a bottomless pit."[17]

Today, the word mestizo is shortened as tisoy just as is the word Pinoy for Filipino. It is used for all Filipinos with foreign ancestry, particularly those born in the diaspora or as children of recent immigrants. It was also mentioned in one of the lyrics in the rap pop song "Panalo" by Filipino-American singer-songwriter Ez Mil.

Comparisons with other countries