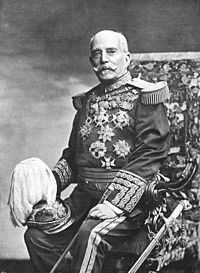 He entered the General Military College in 1844 and reached the rank of second lieutenant and graduated in 1847. He was stationed in Madrid the following year when the insurrection of March 26 broke out in which he took part. He was awarded the Cross of San Fernando and promoted to lieutenant for his distinguished behavior.

He devoted himself to military education at the Infantry College and reached the rank of commander of the Burgos regiment. On 22 June 1866, a new insurrection broke out in Madrid, and Primo de Rivera was commissioned to quell it. As he was successful in doing it, he was promoted to the rank of lieutenant colonel. In 1867, he was commissioned to pursue smuggling in the Campo de Gibraltar.

When Gloriosa broke out in 1868, he was in Granada and he left in front of his men in the direction of Antequera, where he managed to reestablish calm. He immediately left for Granada where the revolution had also broken out. In December 1868, he was promoted to colonel for his peacekeeping work. In October 1869, he was promoted to brigadier. In 1872, he was awarded the Grand Cross of Isabel la Católica for his services.

The Third Carlist War broke out in 1872. As Chief of the II Army Corps, he took Montejurra on 7 November 1873. After two years of service as field marshal, he was appointed captain general of Castile on 5 September 1874. In 1876, he took the Plaza de Estella, which marked the end of the Carlist uprising.

Between 1880 and 1883, Primo de Rivera served as captain general of the Philippines. During his term, he fought against smuggling and banditry, pacified the territory, and reached an agreement with the indigenous people who surrendered in exchange for land. He resigned in 1883 and returned to Spain the following year where he was appointed director general of infantry.

In November 1893, he was assigned the command of the first army corps of operations in Africa. On 24 March 1897, he was appointed Governor and Captain General of the Philippines to end the uprising in the archipelago. He signed the Pact of Biak-na-Bato in 1897 and exiled the revolutionary leaders to Hong Kong.

On 12 April 1898, he resigned and returned to Spain. In 1907, he was assigned Minister of War and in 1917, he returned to the same position under Eduardo Dato’s term. Between 1920 and 1921, he was served as president of the Supreme Council of War and Navy until his death.