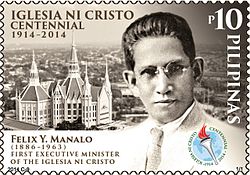 Manalo on a 2014 stamp of the Philippines

Félix Ysagun Manalo (b. May 10, 1886 - d. April 12, 1963) was the founder and first Executive Minister of the religious organization Iglesia ni Cristo.

However, the official doctrines of the church do not state that Felix Y. Manalo is the INC's founder, and professes that he is the last messenger of God, sent to reestablish the first church founded by Jesus, which the INC claims to have fallen into apostasy following the death of the Apostles.

Born in Bo. Calzada, Taguig, Rizal to poor, devout Catholic parents Mariano Ysagun and Bonifacia Manalo. He later had his last name changed to Manalo after his mother's death, in reverence for his mother, historians claim, and also to fortify his ministry, the name Manalo meaning 'to win' in Tagalog. Others claim the change was an attempt to leave obscurity, Manalo being a more prominent name than Ysagun (the "Y" is prounounced as an "ee"). [2]

Manalo joined and left many religious organizations as a young adult. [3]. He was baptized a Roman Catholic, but at a young age went through a succession of faiths. He joined the local spiritist cult, and was an atheist at one point, but later joined the Methodist Episcopal Church after witnessing a debate. He attended their seminary and became a pastor. [4] He later joined the Christian and Missionary Alliance, attracted to the way their converts were baptized, which was by immersion. [5] His ministry led him into a debate with L.V. Finster of the Seventh-day Adventist Church. He was defeated, and convinced into joining the Adventists. He then left the Adventist church after a disagreement regarding scripture. [5]

The birth of the Iglesia Ni Cristo

After he finished reading the Bible in-depth (for what sources say was three days with neither food nor rest from sunrise to sundown only), he proclaimed God gave him a mission to preach the gospel and reestablish the first church founded by Jesus. On July 27, 1914, INC was incorporated to the Philippine Government.

Manalo propagated his message within his local area, growing the Iglesia Ni Cristo and converting members of other religions. As membership increased, he delegated others to spread the teachings of the INC and it eventually spread throughout the Philippines and to other countries. Template:Fact

It has been reported that the INC's considerable political clout began under Felix Manalo's leadership, when Manuel Quezon, the former president of the Philippines, referred to him as "bishop" and sought support from the church. [6]

Manalo was married to Tomasa Sereneo, with whom he had a child who died in infancy. Tomasa herself was afflicted with tuberculosis and died as well. He later married Honorata de Guzman, a fellow former Adventist. Their fifth child, Eraño G. Manalo, is now the present Executive Minister of the Iglesia Ni Cristo, while his grandson Eduardo is its deputy Executive Minister.

Felix Manalo was afflicted with an intestinal disease and died on April 12, 1963.