Feast of the Black Nazarene 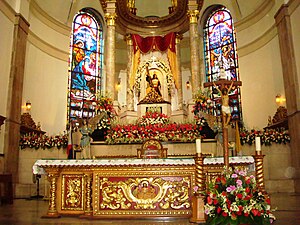 The image enshrined above the high altar of the Minor Basilica of the Black Nazarene, Manila.

The Black Nazarene is a life-sized, dark-skinned statue of Jesus Christ, which was carved by an Aztec carpenter. A priest bought the statue in Mexico during the time of the Galleon Trade. The image is now enshrined in the minor basilica in Quiapo, Manila Friday is when devotees go to the church to pay homage. The Feast of the Black Nazarene, celebrated every year on January 9, is one of the largest and most popular religious festivals in the Philippines.

The statue was brought to Manila by the first group of Augustinian Recollect friars on 31 May 1606.[1] The image was enshrined at the first Recollect church in Bagumbayan (now part of the Rizal Park), which was inaugurated on 10 September 1606 and placed under the patronage of Saint John the Baptist.

In 1608, the second bigger Recollect church dedicated to San Nicolas de Tolentino (Saint Nicholas of Tolentine) was completed inside Intramuros, and the image of Nuestro Padre Jesús Nazareno was transferred there. The Recollect Fathers then vigorously promoted devotion to the Suffering of Our Lord represented by the image such that after fifteen short years, the Cofradia de Jesús Nazareno was established on April 21. The confraternity obtained the Papal approval on 20 April 1650 from His Holiness Pope Innocent X.

Sometime in 1787, the Archbishop of Manila, Basilio Sancho de Santas Junta y Rufina, ordered the transfer of the image of the Nazareno to the church in Quiapo, again placed under the patronage of Saint John the Baptist.

The image survived the great fires that destroyed Quiapo Church in 1791 and 1929, as well as the great earthquakes of 1645 and 1863, and the destructive bombing of Manila in 1945 during World War II.

In 1998, however, a replica of the original Black Nazarene was first paraded due to the repeated damages inflicted on the statue. Today, the head and the cross stays on the Altar Mayor of the Minor Basilica, and the original body image of the Black Nazarene is used in the processions. Other, even smaller replica can be found in other churches. 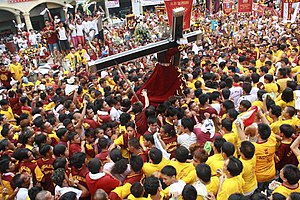 A replica of the Black Nazarene at Plaza Miranda during the 2011 Traslación.

The devotion to Nuestro Padre Jesús Nazareno has attracted a huge following. Its initial popularity in the northern and southern provinces of Luzon spread over time throughout the country.

The uniquely Filipino devotion to the Black Nazarene merited the sanction and encouragement of two popes: Innocent X in 1650, with a Papal Bull canonically establishing the Cofradia de Jesús Nazareno; and Pius VII in the 19th century, by granting indulgence to those who piously pray before the image of the Black Nazarene of Quiapo.

Today, despite the rough-and-tumble that usually accompanies the thrice-yearly procession of the image, the Filipino people's devotion to God in the special appellation of Nuestro Padre Jesús Nazareno continues to flourish and shows no sign of waning--death, wounds, bodily pains and physical discomfort notwithstanding.

For more than 200 years, the statue has been placed on a gilded carriage every January and is pulled through the streets of Quiapo by male devotees dressed in maroon. People who touch the Nazarene are reported to sometimes be healed of diseases. Catholics come from all over Manila hoping for the chance to get close enough to touch the image and perhaps receive a miracle. They also throw towels to the people guarding the statue and ask them to rub the towel on the statue in hopes of carrying some of that miraculous power away with them.

The hymn Nuestro Padre Jesús Nazareno was composed by National Artist for Music Lucio San Pedro to honour the image. It is used by the Minor Basilica as the official anthem of the devotion and its associated rites.

Traslacion, the grand procession of the Black Nazarene, is an annual religious event which typically gathers millions of Filipino devotees. It will not take place again in 2022 due to the prevailing coronavirus disease pandemic. The National Task Force (NTF) Against COVID-19 approved the recommendation to suspend Traslacion this year and all other activities related to it. The NTF cited the detection of various variants of concern in the country as among the reasons for the approval of the recommendation to suspend Traslacion. The Minor Basilica of the Black Nazarene of Quiapo Church will be closed from January 7 to 9 and no Holy Mass shall be physically conducted on the said dates. Checkpoints and security personnel will also be deployed around Quiapo Church “to discourage devotees/people from gathering.”