Fabian Cueto de la Rosa (5 May 1869-14 December 1937) was a Philippine painter noted for his realistic portraits, genre paintings, and landscapes in subdued colors. Aurelio S. Alvero divided his works into three periods: in the first period, the emphasis was academic, detailing figures but forgetting atmosphere; the second period showed a transition of focus on academic figures to atmosphere; in his third period, emphasis was on play of colors in favor of massing and spacing, blurring figures almost into abstractions.

He was born in Paco, Manila, the second child of Marcos de la Rosa and Gregoria Cueto. Talented from the start, he could draw even before he could write. His aunt, Marciana de la Rosa, gave him his first art lessons when he was ten.

He became an apprentice of Simon Flores. He enrolled at the Escuela Superior de Pintura, Grabado y Escultura in 1893, two years after producing his first known masterpiece, La Perla de Lucban. However, he felt that the academy lacked concern with timely subjects and styles.

He decided to leave the academy to search for inspiration in the studios of the simple anonymous painters in Quiapo and Sta. Cruz. He adopted their realistic, unsentimental portrayal of scenes from actual life. He also took lessons from Miguel Zaragoza and Lorenzo Guerrero. In 1898, he won a scholarship to the Madrid Art Academy. He also studied in the Academie de Julien in Paris and the Academia de Bellas Artes in Madrid in 1908 under a Germinal Cigar Factory scholarship. By then, modern art in all its different forms was taking Europe by storm. The only European painter to influence De la Rosa, however, was Courbet, a painter who had advocated Realism over Romanticism. 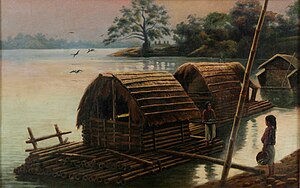 He returned to the Philippines in 1910, two years after the University of the Philippines (UP) was founded. He then joined the faculty of UP, teaching decorative painting and encouraging students to pursue originality in their art. From then on, he relied on teaching as well as portrait-painting to support his wife, a singer named Gorgonia Tolentino, whom he had married in 1900. He became the first Filipino director of the UP School of Fine Arts in 1926, a position he retained until his death.

He returned to Europe on a tour with his wife in 1928. After traveling and painting in Paris, Munich, Geneva, Rome, and Madrid, he exhibited some of his works in the Ateneo de Madrid.

The distinguished painter died of kidney disease in Quiapo, Manila in 1937, less than a year after his wife succumbed to cancer. 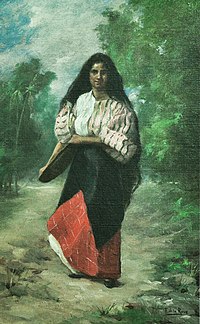