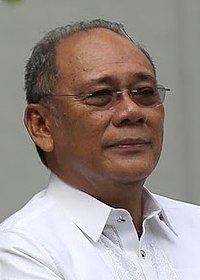 Ernesto Abella is a Filipino businessman, writer, and former evangelist. He served as the presidential spokesperson of President Rodrigo Duterte from 2016 to 2017 and as undersecretary for Strategic Communications and Research of the Department of Foreign Affairs (DFA) from 2017 to 2021.

Prior to joining the government, he served as an executive with a Davao City-based agricultural products manufacturer and a local cooperative which he co-founded. He was also a columnist for SunStar Davao. He also established a school in Davao.

On 8 October 2021, he filed his certificate of candidacy (COC) for president as an independent candidate. He cited the Philippines "only run by the elites" as reason for his decision to run.

He started his career in advertising. He was the Creative Director for Adformatix in Makati from 1975 to 1977. He moved back to Davao to work as a columnist for San Pedro Express and as a professor at Ateneo de Davao.

In 1990, he founded the Hope of Asia and the Christian charismatic group Jesus Fellowship, Inc. He also served as board member of the Philippine Council of Evangelical Churches and the Koinonia Theological Seminary. He was a preacher in Davao for several years until he was abducted by ethnic bandits claiming to be members of the rebel group Moro Islamic Liberation Front (MILF) in 1996. President Rodrigo Duterte, who was then Mayor of Davao, was instrumental for his freedom 24 hours after his abduction. He said that Duterte requested the captains of the Moro National Liberation Front (MNLF) to do all they could to save him. It was then when he started following Duterte and actively campaigned for him through social media in the last elections.

In 2002, he pursued a career in agri-business and served as Chief Executive Officer of AZ Agri-Products and as Chief Operating Officer of F&P Agri-Inputs. He also established One Accord Credit Cooperative and Southpoint School in Davao.

He was appointed as the Presidential Spokesperson of Duterte in 2016. Duterte has been evasive of the media for he complained that he was often misinterpreted or taken out of context. Instead of holding press conferences, he has been coursing his messages through the state-run network PTV. For his part, Abella explained that he views the media as a tool to represent the true intentions of the people and to be the voice of the people. When asked if he believes in censorship, he said that he believes in decency.

In October 2017, he was replaced by Harry Roque. He was subsequently appointed as Undersecretary for Strategic Communications and Research at the Department of Foreign Affairs (DFA) until he resigned on 8 October 2021 to file his candidacy for president.