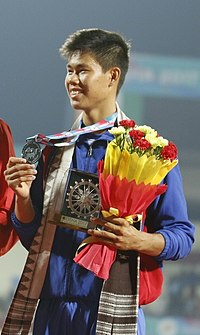 Obiena at the 2017 Asian Championships

Ernest John Uy Obiena (born 17 November 1995) is a Filipino pole vaulter. On 29 April 2016, he obtained the national record in pole vaulting with a record of 5.55 meters at the 78th Singapore Open Championships in Singapore. He later earned the gold medal finish with a record of 5.71 meters on 21 April 2019 in the Asian Athletics Championships at Doha, Qatar. He currently holds the National Record he broke in the same event. He is the first Filipino to receive a scholarship from the International Athletic Association Federation (IAAF).

Now ranked No. 5 in the world, Obiena was the first Filipino Tokyo 2020 Olympics qualifier in 2019.

Obiena comes from a family of athletes. His family is very active in the country’s athletic scene. His father Emerson represented the Philippines and won the Southeast Asian (SEA) Games silver and bronze medals. He also served as a national Filipino pole vault coach. His mother Jeanette competed in hurdles at university level. His sister Emily Jean is also a pole vaulter and has competed at the 2017 Southeast Asian Games in Kuala Lumpur, Malaysia.

EJ started pole vaulting at six years old after witnessing how his father excelled in the sport. He received support and encouragement to pursue pole vaulting. He received university scholarships from Ateneo de Manila University (ADMU) and University of Santo Tomas (UST). In January 2019, he took a year off from his electronic engineering studies at UST to focus on his sporting career.

In 2014, Obiena moved to Formia, Italy to train with Ukranian coach Vitaly Petrov. The latter rose to fame after coaching 1988 Olympic gold medalist Sergey Bubka. In the early 2000s, Petrov was able to train four Olympic gold medalists and world champions including Thiago Braz. Obiena and Braz train together.

He sustained an ACL injury a day before leaving for the 2017 SEA Games in Kuala Lumpur, Malaysia.

In 2018 and 2019, he was named Male Athlete of the Year by Filipino athletics website Pinoyathletics.

Obiena bowed out of medal contention in the Tokyo 2020 Olympics on 3 August 2021 after he came up short of a podium finish. He failed to clear 5.80 meters in the men’s pole vault final. He exhausted all of his three attempts to leap over the said height and stay in the medal hunt. He finished 11th.

Obiena holds the Philippine outdoor record of the event with a 5.87 meter clear.