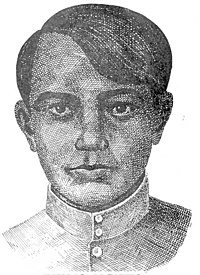 Jacinto was born on 15 December 1875 in Trozo, Tondo, Manila to Mariano Jacinto and Josefa Dizon. His father having died shortly after he was born, Jacinto was sent to live with his uncle, Don Jose Dizon. He was educated in both Spanish and Filipino and attended the Colegio de San Juan Letran. He later transferred to the University of Santo Tomas where he studied law; however, he did not finish the course.

At the age of 19, Jacinto joined the Katipunan and became one of its leaders. He served as Andres Bonifacio's secretary and fiscal, and also supervised the manufacture of gunpowder to be used by the Katipuneros in battle. A gifted writer, Jacinto also became the editor of Ang Kalayaan, the newspaper of the Katipunan. He wrote the Kartilya ng Katipunan which contains the rules and regulations of the movement. He also wrote the poem “A La Patria,” which was inspired by Dr. Jose Rizal's Mi Ultimo Adios, under the pen name of Dimas Ilaw.

Jacinto was mortally wounded in a battle in Majayjay, Laguna and died on 16 April 1899 at the age of 24. His remains were later transferred to the Manila North Cemetery