Eastern world, also known as the East or the Orient, is an umbrella term for various cultures or social structures, nations and philosophical systems, which vary depending on the context. It most often includes at least part of Asia or, geographically, the countries and cultures east of Europe, the Mediterranean region and Arab world, specifically in historical (pre-modern) contexts, and in modern times in the context of Orientalism.[1] It is often seen as a counterpart to the Western world, and correlates strongly to the southern half of the North–South divide.

The various regions included in the term are varied, hard to generalize, and do not have a single shared common heritage, as is frequently claimed for the Western world. Although the various parts of the Eastern world share many common threads, most notably being in the Global South they have never historically defined themselves collectively.[2]

The term originally had a literal geographic meaning, referring to the eastern part of the Old World, contrasting the cultures and civilizations of Asia with those of Europe (or the Western world). Traditionally, this includes all of East and Southeast Asia, the Greater Middle East, Central Asia, and South Asia (Afghanistan and the Indian subcontinent).

Conceptually, the boundary between east and west is cultural, rather than geographical, as a result of which Australia is typically grouped in the West, while the Central Asian nations of the former Soviet Union, even with significant western influence, are grouped in the East.[3] Other than Asia and some parts of Africa, Europe has successfully absorbed almost all of the societies of Oceania, and the Americas into the Western world,[4][5] Turkey, the Philippines and Israel, which are geographically located in the Eastern world, are considered at least partially westernized due to the cultural influence of Europe.[6][7][8]

Although the concept of a unified Asian race does exist, its legitimacy is dubious, given how many different countries and cultures Asia comprises.[9][10] This concept is even more debatable due to the fact that common parlance links the "Asian identity" to the people of South and East Asia and exclude regions of Western Asia, which do not typically consider themselves part of the Eastern world; such areas include the Arab nations, Israel, Turkey and Iran.[11]

Asian cultures often have strong traits of nationalism and ethnic individualism, but the presence of many different cultures, environments, economics, historical ties and government systems often results in cultural identities specific to individual nations and ethnic groups, not inclusive of the rest of the continent. People of Asia may prefer not to identify with their continent or region, but rather with their specific nation or cultural group.

The division between 'East' and 'West', formerly referred to as Orient and Occident, is a product of European cultural history and of the distinction between European Christendom and the cultures beyond it to the East. With the European colonization of the Americas the East/West distinction became global. The concept of an Eastern, "Indian" (Indies) or "Oriental" sphere was emphasized by ideas of racial as well as religious and cultural differences. Such distinctions were articulated by Westerners in the scholarly tradition known as Orientalism and Indology. The notion of an Asian identity may, therefore, be considered a primarily European construct. Orientalism, interestingly, has been the only Western concept of a unified Eastern world not limited to any specific region(s), but rather all of Asia together.[12][13]

During the Cold War, the term "Eastern world" was sometimes used as an extension of Eastern bloc, connoting the Soviet Union, the People's Republic of China and their communist allies, while the term "Western world" often connoted the United States and its NATO allies such as the United Kingdom.

The concept is often another term for the Far East – a region that bears considerable cultural and religious commonality. Eastern philosophy, art, literature, and other traditions, are often found throughout the region in places of high importance, such as popular culture, architecture and traditional literature. The spread of Buddhism and Hindu Yoga is partly responsible for this.

The spread of Syriac Christianity to East Asia. 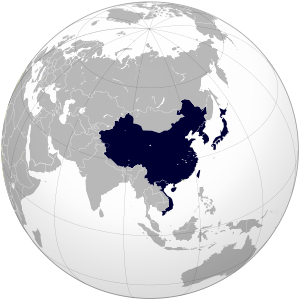 Eastern culture has developed many themes and traditions. Some important ones are: