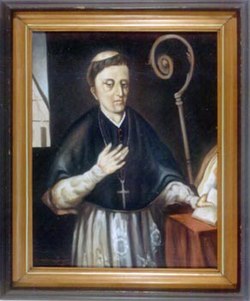 He was born in La Rioja, Spain.[4] On 6 February 1579, he was selected by the King of Spain and confirmed by Pope Gregory XIII as the first Bishop of Manila. He was installed in 1581. He strongly opposed enslaving the indigenous people of the Philippines. He served as Bishop of Manila until his death on 4 December 1594, aged 82.[2]