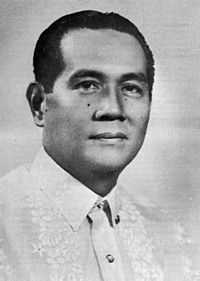 To read this article in Filipino, see Diosdado Macapagal.

Diosdado Pangan Macapagal (September 28, 1910 – April 21, 1997) was a politician who served as the ninth president of the Philippines. He was elected in 1961, defeating Carlos P. Garcia in his reelection bid. Macapagal himself did not win in his own reelection bid in 1965, losing to Ferdinand Marcos.  He was also known by his nickname "The Incorruptible." His daughter Gloria Macapagal-Arroyo is another former president of the Philippines.

A native of Lubao, Pampanga, Macapagal was the sixth vice president of the country from 1957 to 1961 under Garcia. He also served as a member of the House of Representatives, and headed the Constitutional Convention of 1970. He was the president who changed the day of commemoration of Philippine Independence from July 4  to June 12.

Diosdado Macapagal Sr. was born on 28 September 1910 in Lubao, Pampanga to Urbano Macapagal and Romana Pangan. He graduated valedictorian from Lubao Elementary School in 1925 and finished his secondary education with the second-highest rating in Pampanga High School in 1929.

He attended the University of the Philippines for his tertiary education and then took up law at the Philippine Law School. In law school, he was known as an orator and debater. Due to poor health and lack of resources, he had to take leave from his studies.

After earning enough money and securing the help of philanthropist Honorio Ventura, the secretary of Interior at that time, Macapagal continued his law studies at the University of Santo Tomas. He received his law degree in 1936 and was the topnotcher in the bar examination of the same year with a rating of 89.95 percent. He would later return to his alma mater and earn a Master of Laws degree in 1941, a Doctor of Civil Law degree in 1947, and a PhD in economics in 1957.

After topping the bar in 1936, Macapagal worked as a lawyer for an American firm in Manila, and served as a legal assistant to President Manuel L. Quezon.

During the Japanese occupation of World War II, Macapagal provided support to the anti-Japanese task force and worked as an intelligence liaison officer with the US guerillas. It was during this period that his wife Purita died. He later married Evangelina Macaraeg. They had two children, former President Gloria Macapagal-Arroyo and Diosdado Macapagal Jr.

In 1948, Macapagal served as second secretary to the Philippine Embassy in Washington DC. At the urging of then-Pampanga governor Joe Lingad, Macapagal ran in the 1949 general elections for a seat in the House of Representatives, representing the first district of Pampanga. He won the election and was reelected in the 1953 general elections, serving in the Second and Third Congress. While serving in Congress, Macapagal was named Philippine representative to the United Nations General Assembly three times.

In the 1957 general elections, Macapagal ran for vice president of the Philippines under the Liberal Party as the running mate of Jose Yulo. While Yulo was defeated by Carlos P. Garcia of the Nacionalista Party, Macapagal was elected vice president, defeating the Nacionalista candidate, Jose Laurel Jr., by over 8 percentage points. Macapagal served out his four-year term as vice president as the de facto leader of the opposition, and benefited from the increasing unpopularity of the Garcia administration. In the 1961 presidential election, Macapagal ran against Garcia and defeated the incumbent president by a 55 to 45 percent margin.

Seeking to stimulate economic development, Macapagal took the advice of supporters and allowed the Philippine peso to float on the free currency exchange market. His reform efforts were blocked by the Nacionalistas, who dominated the House of Representatives and the Senate at that time. Nonetheless, he was able to achieve growth and prosperity for the nation.

Among the most significant achievements of Macapagal as president were the abolition of tenancy and accompanying land reform program in the Agricultural Land Reform Code of 1963. He likewise changed the date of celebration of Philippine independence from July 4 to June 12, the latter date having been the day when Emilio Aguinaldo declared independence from Spain in 1898.

Macapagal was defeated in his reelection bid in 1965 by Senate President Ferdinand Marcos, a former Liberal Party ally who defected to the Nacionalista party to challenge the incumbent president.

In 1971, Macapagal was elected president of the Constitutional Convention that drafted what became the 1973 constitution.

In 1979, Macapagal formed the National Union for Liberation to oppose the Marcos regime.  After his retirement, Macapagal devoted much of his time to reading and writing. He authored several books and wrote a weekly column for the Manila Bulletin newspaper.

Diosdado Macapagal died of heart failure, pneumonia, and renal complications at the Makati Medical Center on April 21, 1997. His remains are buried at the Libingan ng mga Bayani.