The Dinagyang Festival is a famous and religious and cultural festival in Iloilo City, Philippines held on the 4th Sunday of January, or right after the Sinulog in Cebu and the Ati-Atihan Festival in Kalibo, Aklan. Dinagyang was also voted as the Best Tourism event three times in a row among any other festivals in the Philippines. It is also the most awarded festival in the country because of its legacy, popularity, and innovation. Dinagyang received honors and regarded as a World Class Festival and dubbed as the "Queen of all festivals" in the Philippines.

Dinagyang began after Rev. Fr. Ambrosio Galindez, the first Filipino Rector of the Agustinian Community and Parish Priest of the San Jose Parish introduced the devotion to Santo Niño in November 1967 after observing the Ati-Atihan Festival in the province of Aklan. On 1968, a replica of the original image of the Santo Niño de Cebu was brought to Iloilo by Fr. Sulpicio Enderez of Cebu as a gift to the Parish of San Jose. The faithful, led by members of Confradia del Santo Niño de Cebu, Iloilo Chapter, worked to give the image a fitting reception starting at the Iloilo Airport and parading down the streets of Iloilo.[1]

In the beginning, the observance of the feast was confined to the parish. The Confradia patterned the celebration on the Ati-atihan of Ibajay, Aklan, where natives dance in the streets, their bodies covered with soot and ashes, to simulate the Atis dancing to celebrate the sale of Panay. It was these tribal groups who were the prototype of the present festival.[2]

In 1977, the Marcos government ordered the various regions of the Philippines to come up with festivals or celebrations that could boost tourism and development. The City of Iloilo readily identified the Iloilo Ati-atihan as its project. At the same time the local parish could no longer handle the growing challenges of the festival.[3]

Dinagyang was voted as the best Tourism Event for 2006, 2007 and 2008 by the Association of Tourism Officers in the Philippines. It is one of few festivals in the world to get the support of the United Nations for the promotion of the Millennium Development Goals, and cited by the Asian Development Bank as Best Practice on government, private sector & NGO cooperatives.[4]

As an added attraction to the Ati Tribe competition, the Kasadyahan Cultural competition was added in the festival from the 1980s to 2019 to showcase the talents of the students as well as the rich cultural heritage of the province of Iloilo.[5] In the first few years of this event, schools from various towns and cities in the province participates in this competition but in recent times, the cultural competition confined only in the province became a regional scope accepting entries from other provinces of the region showcasing the best of Western Visayas cultural and historical heritage.

The main part of the festival which is the Ati Tribe competition consists of a number of "warrior" dancers (who hold a shield in one hand and a spear in another) in a tribe (locally called "tribu") dancing in a choreographed formation and patterns as well as chanting to the sound of loud drum beats and improvised percussion instruments innovated by the respective tribes. In the early years, a number of tribes where created, founded and organized by some of the barangay or communities around the city but through the years and as the Dinagyang evolves and the competition becomes competitive gaining worldwide fame and attention, schools are starting to create and organize tribes introducing dynamic new dance patterns, formations and choreography soliciting sponsors from private companies for expenses and cost of participating in the competition.[6] No actual Ati are involved nor do they benefit in any way from this event. There are a number of requirements, including that the performers must paint their skin black and indigenous and other kinds of materials can be used for the costumes. All dances are performed to drum music. Many tribes are organized by the local high schools and in recent times some tribes came from as far as Batanes in Luzon and Cotabato in Mindanao. The tribes receive a subsidiary from the Dinagyang Foundation Inc. and the city government of Iloilo [7] and recruit private sponsors, with the best tribes receiving the most. The current Ati population of Iloilo is not involved with any of the tribes nor are they involved in the festival in any other way although recently the original Atis from the hinterlands of Panay specifically from the mountains of Barotac Nuevo and Anilao came to participate non-competitively for recognition and giving them importance as being the characters symbolically portrayed in the festival.[8] 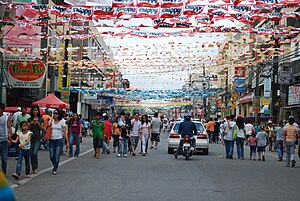 A street in Iloilo City generously decorated with banners (2009)

Dinagyang festival has brought a lot of innovations throughout the years. These innovations has influenced the way other festivals in the country is run. Among these are the following: 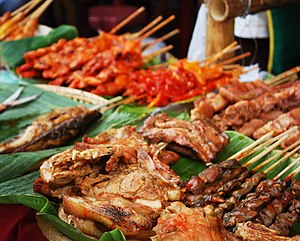 Dagoy is the official festival mascot of Dinagyang. He was born from the promotional sketches of Dinagyang in 2002. The caricature was later adopted as the official logo of the festival. He was introduced to the public in December 14, 2004 in The Fort, Taguig and December 18, 2004 in Iloilo City. Depicted as a young Ati warrior, Dagoy symbolizes the jollification and friendship of the Ilonggo and other thousands of tourists flocked to witness the festival.

Dagoy stands six feet and nine inches tall. He has a dark brown skin tone and wears a headdress with an image of Sto. Niño. He is garbed with a camel-colored loincloth which is the typical attire of an Ati. Dagoy is holding a drum made of fiberglass with the logo of the Iloilo City Government printed at the center. His hands and feet are adorned with multi-colored bracelets, similar to these being worn by a Dinagyang warrior.

Dagoy's winsome smile is popular among children as such miniature version of the mascot is marketed as Dagoy Dolls.