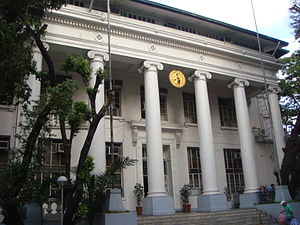 The Department of Justice (DOJ; Filipino: Kagawaran ng Katarungan) is the principal law agency of the Philippine government. The DOJ derives its mandate from the Administrative Code of 1987 (Executive Order No. 292)[1] and serves as the government's prosecution arm, administering its criminal justice system. It is also the country's legal counsel and representative in litigation and proceedings that require the services of a lawyer.

The DOJ’s beginning can be traced to the Naic Assembly, which happened on April 17, 1897. The newly created Department of Grace and Justice, headed by Don Severino delas Alas, was tasked to establish a regime of law. However, the department was not included in the short-lived Republic of Biak-na-Bato, which lasted from November to December 1897.

Following the proclamation of independence in Kawit, Cavite on June 12,  1898, President Emilio Aguinaldo issued a decree, on 26 September 1898, to bring back the department. It was again left out when the First Philippine Republic was inaugurated in January 1899.

Later in 1899, the American military force established the Office of the Attorney of the Supreme Court to act as a justice department. It was renamed Office of the Attorney General on June 11, 1901 and then reorganized into the Department of Finance and Justice on September 1, 1901. After the Jones Law was passed in 1916, the department once again became independent as the Department of Justice. It was given executive supervision over all courts of first instance and other inferior courts.

The department was made a commission under the Japanese military rule. When the Japanese established a civilian government in 1943, it was changed into a ministry. When World War II ended and the Commonwealth government was re-established, the Department of Justice was reactivated.

During martial law, Presidential Decree No.1 reorganized the executive branch of the national government. Letter of Implementation No. 20 of December 31, 1972 organized the department proper into the following:

The department became the Ministry of Justice under the 1973 Constitution. After Ferdinand Marcos was deposed, the People Power Revolution of 1986 also ushered in the contemporary Department of Justice. With the adoption of the 1987 Constitution and the Administrative Code of 1987 (Executive Order No. 292), the Department of Justice was named the principal law agency of the Republic of the Philippines, serving as its legal counsel and prosecution arm.

At present, the Department is headed by the Secretary of Justice, with four undersecretaries and six assistant secretaries.

Prosecutors are assigned to each of the regions, provinces, and cities of the Philippines.[2]

The following agencies and offices are attached to the DOJ for policy and program coordination: