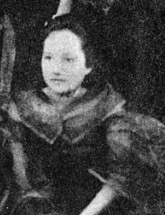 Delfina Rizal Herbosa de Natividad (December 20, 1879 – March 10, 1900) was a Filipino renowned for being one of the three women, together with Marcela Agoncillo and her daughter Lorenza, who seamed together the Philippine flag.[1] She was also the niece of the National Hero of the Philippines, José Rizal.[2]

Delfina was born on December 20, 1879 in Calamba, Laguna to Mariano Herbosa and Lucia Rizal, sister of José Rizal. She was of Spanish, Chinese, and Japanese descent. At the age of thirteen, she joined the Katipunan because her desire to fight oppression. Her father was denied a Christian burial by the Spanish friars because of the claim that he did not go to confession, although the apparent reason was that they were related to José Rizal, whose novel Noli Me Tangere exposed the abuses of the Spaniards.[2]

Teodora Alonzo, with her daughters and granddaughters, a few days after the burial of Francisco Mercado.

Marriage and making of the Philippine flag

Delfina was married to Jose Salvador Alejandrino Natividad, whom she met in the Katipunan. He later became a general of the Philippine Revolution. She then accompanied her husband to his self-exile to Hong Kong. There, she was asked by Marcela Agoncillo to help her and her daughter sew together the Philippine flag.[2]

Natividad and her husband had a daughter together named Paz, who died at the age of two due to an alcohol lamp which fell on her. This caused Natividad much sorrow and mental anguish, thus causing her death at the age of 20.[3]