It is historically significant as the place where José Rizal was exiled by the Spanish colonial authorities for his threat to start revolutionary activities. He is considered a national hero, and this is known as the "Shrine City in the Philippines." It is also often considered the capital of Mindanao Island. The city is also home to Gloria's Fantasyland, the first amusement park in Mindanao.

On June 22, 1963, President Diosdado Macapagal signed R.A. 3811 which converted Dapitan into a chartered city. It is officially renowned as the “Shrine City of the Philippines.”

The earliest settlers of Dapitan were the Subanens, a nomadic tribe of Indonesian stock known to have settled and lived along the banks of the river or “suba” out of which their present-day tribal identity originated.

Dapitan City is politically subdivided into 50 barangays, of which 8 barangays are urban, 27 are interior, 13 are coastal, and 2 are island barangays.[1] In 1955, the sitios of Sipalok, Barcelona, and Potungan were converted into barrios.[2]

Template:Main Template:Stack Taguilon is home to the Dakak Park and Beach Resort. It is a producer of coconut and agar (based on sea weed) as well as a fishing port. The pier in Taguilon is a secondary/alternate port to the main passenger/cargo port in Dapitan City. Additionally, during severe storms at sea, ferries and other ships find shelter in the Taguilon cove. One can find the mount Lalab overlooking the islets of Silinog and part of Balyangaw.

Talisay is a seaside barangay where José Rizal spent four years in exile. A park and shrine honoring the Philippine national hero can be found in the José Rizal Memorial Protected Landscape, a protected area declared in 2000, located in the old Rizal farm site in the barangay.

Liwasan ng Dapitan (Dapitan City Plaza)
Dapitan City Plaza ("Liwasan ng Dapitan"), also known as the City Square, was beautified and developed by Dr. José Rizal during his exile. With the assistance of the Spanish Politico-Military Governor of Dapitan, Gov. Ricardo Carnicero, Rizal made the City Square comparable to those he saw in Europe.[3] It has an area of one hectare, more or less.

Rizal Park and Shrine
Rizal Park and Shrine is a major historical landmark in Dapitan. In August 1892, Rizal, together with Governor Carnicero and Francisco Equilor, a Spaniard living in Dipolog, won a lottery bet which financially enabled Dr. Rizal to buy a 10-hectare piece of land from Lucia Pagbangon. Rizal moved to the area in which the shrine currently stands in March 1893. Later on, his mother, Doña Teodora Alonso Realonda, his sisters, and some relatives from Calamba, Laguna, came and lived with him in Barangay Talisay (which is where the shrine is located) until 1896. Rizal Shrine was declared a national shrine through Presidential Decree No. 105 issued by then-President Ferdinand Marcos on January 24, 1973.

Casa Real
Rizal stayed in Casa Real with Governor Carnicero from his arrival until he moved to the present-day location of Rizal Shrine in Barangay Talisay in March 1893. The appearance of Casa Real is similar to that of the old city hall, with bamboo on each side and the upper portion made up of wood. A replica of Casa Real will soon rise near its marker.

St. James the Greater Church
This church was built in 1871 in honor of St. James the Greater, Dapitan's patron saint. The design of the interior walls is more or less one meter thick and still original except for the furnishing. The altar and the interior hane undergone several renovations. Inside is a historical spot where Rizal stood while hearing Mass every Sunday. At the mezzanine is the priceless heritage organ that bears the year wherein it was made – 1827 – at the choir loft. It was brought to Dapitan by the Agustinian Recollect fathers. A German-made instrument with European pipes, it is a manual pipe organ.

Dapitan City has launched a diversified fiesta celebration of its Patron St. James or Señor Santiago, whose memorial is celebrated every 25 July, for the locals through a three-in-one affair, combining religious, cultural and sports events in its Kinabayo Festival.

The Kinabayo Festival kicks off July 16 and culminates on July 31 with various events taking place within the Shrine City of the Philippines. 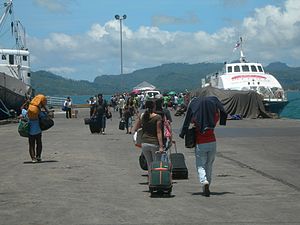 Dapitan is served by the Port of Pulauan in barangay San Vicente (albeit ferry schedules often list the destination as Port of Dipolog, a neighboring city). There are daily ferries from/to Dumaguete and from/to Cebu City.

Dapitan is catered by Dipolog Airport through Philippine Airlines, and Cebu Pacific. From Dipolog take a shuttle bus to Dapitan which is 20–30 minutes ride, that's 12 kilometers from the airport to the City proper of Dapitan.

Dapitan is twinned with: