Crime in the Philippines 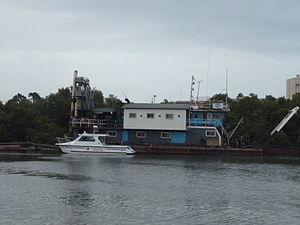 Crime is present in various forms in the Philippines, and remains a serious issue throughout the country. Illegal drug trade, human trafficking, arms trafficking, murder, corruption and domestic violence remain significant concerns. The Philippines has a high rate of murder cases, which is the highest in Southeast Asia as of 2014. Most major cities are plagued with high prevalence of crimes.

Organized crime in the Philippines can be linked to certain families or barkadas (groups) who perpetrate crimes ranging from extortion, sale of illegal narcotics and loan sharking to robbery, kidnapping, and murder-for-hire.[1]Template:Better source

Illegal drug trade is a major concern. Meth ("shabu") and marijuana ("weeds" or "damo"), are the most common drugs accounting most drug-related arrests. Most of the illegal drug trade involved members of large Chinese triad groups operating in the Philippines, owing to its location on drug smuggling routes.

Petty crime, which includes pick-pocketing, is a problem in the Philippines. It takes place usually in locations with many people, ranging from shopping hubs to churches. Traveling alone to withdraw cash after dark is a risk, especially for foreigners.[2]Template:Better source

See: Rape in the Philippines

See: Violence Against Women in the Philippines

Human trafficking and the prostitution of children is a significant issue in the Philippines, often controlled by organized crime syndicates.[3] Human trafficking in the country is a crime against humanity.[4][5][6][7][8]

In an effort to deal with the problem, the Philippines passed Republic Act (R.A.) 9208, the Anti-Trafficking in Persons Act of 2003, a penal law against human trafficking, sex tourism, sex slavery and child prostitution.[9] Nevertheless, enforcement is reported to be inconsistent.[10]Template:Update inline

See: Prostitution in the Philippines

Prostitution in the Philippines is illegal. It is a serious crime with penalties ranging up to life imprisonment for those involved in trafficking. It is covered by the Anti-Trafficking in Persons Act.[9] prostitution is still sometimes illegally available through brothels (also known as casa), bars, karaoke bars, massage parlors, street walkers and escort services.[11] Template:As of, one source estimates that there are 800,000 women working as prostitutes in the Philippines, with some of them believed to be underage.[11] While victims are largely female, and according to the current Revised Penal Code, there are in fact a small minority of them who are male.[12]

See: Corruption in the Philippines]]

Corruption is a major problem in the Philippines. In 2013, during the country's elections, some 504 political candidates were accused mostly of corruption and some of violent crimes.[13]Template:Additional citation needed

Cities with the highest crime volume

The table below shows the three cities with the highest crime volume as of 2018.[14]

Cities with the least crime incidents

Cities with the highest crime solution efficiency as of 2018.[15]