The corrido (Template:IPA-es) is a popular narrative metrical tale and poetry that forms a ballad. The songs are often about oppression, history, daily life for criminals, and other socially relevant topics.[1] It is still a popular genre today in Mexico and even gained some popularity in the U.S. more specifically in California and Texas. Corridos were widely popular during the Mexican Revolutions of the 20th century. The corrido derives largely from the romance, and in its most known form consists of a salutation from the singer and prologue to the story, the story itself, and a moral and farewell from the singer.

Outside Mexico corridos are popular in Chilean national-day celebrations of Fiestas Patrias.[2][3]

An example of a corrido song sheet or sheet music, this one from 1915 at the height of the Mexican Revolution.

Corridos play an important part in Mexican and Mexican American culture. The name origin comes from the Spanish word meaning "to run" in Spanish this would be "correr". The formula of a standard corrido is of eight quatrains that have four to six lines that contain eight syllables.[4] Corridos have a long history in Mexico, starting from the Mexican War of Independence in 1810 and throughout the Mexican Revolution.[5] Until the arrival and success of electronic mass-media (mid-20th century), the corrido served in Mexico as the main informational and educational outlet, even with subversive purposes, due to an apparent linguistic and musical simplicity that lent itself to oral transmission. After the spread of radio and television, the genre evolved into a new stage and is still in the process of maturation. Some scholars, however, consider the corrido to be dead or moribund in more recent times (see e.g. Vicente T. Mendoza, El corrido mexicano, 1954). In more rural areas where Spanish and Mexican cultures have been preserved because of isolation, the romance has taken on other forms related to the corrido as well. In New Mexico, for example, a story-song emerged during the colonial period that was known as an Indita, which loosely follows the format of a corrido, but is chanted rather than sung, similar to a Native American chant, hence the name Indita.

The earliest living specimens of corrido are adapted versions of Spanish romances or European tales, mainly about disgraced or idealized love, or religious topics. These, that include (among others) "La Martina" (an adaptation of the romance "La Esposa Infiel") and "La Delgadina", show the same basic stylistic features of the later mainstream corridos (1/2 or 3/4 tempo and verso menor lyric composing, meaning verses of eight or less phonetic syllables, grouped in strophes of six or less verses).

Beginning with the Mexican War of Independence (1810–1821) and culminating during the Mexican Revolution (1910–1921), the genre flourished and acquired its "epic" tones, along with the three-step narrative structure as described above.

A contemporary corrido song sheet of La cucaracha issued during the Mexican Revolution. Note the original lyrics and the reference to cartoncitos, which were a type of scrip issued as pay.

Some corridos may be love stories. These are not exclusively male by any means, there are also corridos about women such as La Venganza de Maria, Laurita Garza, El Corrido de Rosita Alvirez and La Adelita, or couples such as La Fama de la Pareja sung by Los Tigres del Norte. Some even employ fictional stories invented by their composers.

Prior to widespread use of radio, popular corridos were passed around as an oral tradition, often to spread news of events (for example, La cárcel de Cananea) and popular heroes and humor to the population, many of whom were illiterate prior to the post-Revolution improvements to the educational system. Academic study of corridos written during the Revolution shows that they were used as a means to communicate news throughout Mexico as a response to the propaganda being spread in the newspapers which were owned by the corrupt government of Porfirio Díaz. Sheet music of popular corridos was sold or included in publications. Other corrido sheets were passed out free as a form of propaganda, to eulogize leaders, armies, and political movements, or in some cases to mock the opposition. The best known Revolutionary corrido is La Cucaracha, an old song that was rephrased to celebrate the exploits of Pancho Villa's army and poke fun at his nemesis Victoriano Huerta.

With the consolidation of "Presidencialismo" (the political era following the Mexican Revolution) and the success of electronic mass-media, the corrido lost its primacy as a mass communication form, becoming part of a folklorist cult in one branch and, in another, the voice of the new subversives: oppressed workers, drug growers or traffickers, leftist activists and emigrated farmworkers (mainly to the United States). This is what scholars designate as the "decaying" stage of the genre, which tends to erase the stylistic or structural characteristics of "revolutionary" or traditional corrido without a clear and unified understanding of its evolution. This is mainly signified by the "narcocorrido", many of which are egocentric ballads paid for by drug smugglers to anonymous and almost illiterate composers (more about this assertion here lTemplate:Dead link), but with others coming from the most popular norteño and banda artists and written by some of the most successful and influential ranchera composers. 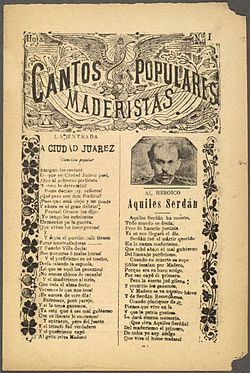 In the Mestizo-Mexican cultural area the three variants of corrido (romance, revolutionary and modern) are both alive and sung, along with popular sister narrative genres, such as the "valona" of Michoacán state, the "son arribeño" of the Sierra Gorda (Guanajuato, Hidalgo and Querétaro states) and others. Its vitality and flexibility allow original corrido lyrics to be built on non-Mexican musical genres, such as blues and ska, or with non-Spanish lyrics, like the famous song El Paso by Marty Robbins, and corridos composed or translated by Mexican indigenous communities or by the "Chicano" people in the United States, in English or "Spanglish". The corrido was, for example, a favorite device employed by the Teatro Campesino led by Luis Valdez in mobilizing largely Mexican and Mexican-American farmworkers in California during the 1960s.

Corridos have seen a renaissance in the 21st century. Contemporary corridos feature contemporary themes such as drug trafficking (narcocorridos), immigration, migrant labor and even the Chupacabra.[6]

Template:Main Modern artists have created a modern twist to the historical corridos. These new type of corridos are called narcocorridos (literally "drug-ballad").[7] The earliest form of corridos emerged in the Mexican Revolution and they told stories of revolutionary leaders and stories of battles. Narcocorridos typically use real dates and places to tell mainly stories of drug smuggling, but also include violence, murder, poverty corruption, and crime.[8]

The border zone of Rio Grande has been credited with being the birthplace of Narcocorridos. This began in the sixties with the fast growth of drug empires in the border states of Mexico and the United States.[9] As drug lords grew, people idolized them and began to show their respect and admiration through narcocorridos.[9]

There are two main types of narcocorridos: commercial corridos and private corridos. Commercial narcocorridos recorded made by famous artists who idolize a certain drug dealer and release a song about him, while private narcocorridos are usually commissioned by the drug dealer himself.[10] While commercial corridos are available to the public, private narcocorridos are restricted to night-clubs that are frequently attended by drug dealers, or through CDs bought on the street. Drug lords often pay singers to write songs about them, as a way to send a message to rivals. These songs are found to be most popular on YouTube, many that have a banner "Approved by the cartel". These type of corridos are changing from the formula historic and typical corridos would usually take. A first person voice is now being sung instead of the historic third person point of view.[11]

The Mexican government has tried to ban narcocorridos because for their explicit and controversial lyrics. Most of the Mexican public argues that crimes and violence are to blame for narcocorridos.[12] However, despite the efforts of the Mexican government to ban narcocorridos, the northern states of Mexico can still get access to these songs through US radio stations whose signal still reaches the northern states of Mexico. Narcocorridos are also widely available on websites like Youtube and iHeartRadio. Today, narcocorridos are popular in other Latin American countries like Bolivia, Colombia, Peru, Guatemala and Honduras.[13]