Corregidor is an island in the entrance of the Philippines' Manila Bay. Due to its position in the bay, it has served as a focal point for the naval defenses of the capital city of Manila. During World War II, Corregidor was the site of several battles and its fall to the Japanese forces was instrumental in the subsequent capture of the Philippines and the retreat of the United States in the early stages of the war. Currently, it is an important historic and tourist site and is managed under the jurisdiction of Cavite City.

The island is tadpole-shaped, about three miles long, and it's widest point measures 1 ½ miles. It faces the China Sea and is sandwiched by the provinces of Bataan and Cavite. Corregidor's tail has a land area of 9 km2 and is running eastward, thus, making the island a strategic location since the Spanish colonization period.

Its largest area (the “head”), called the Topside, is the nerve center of the entire island. It is the highest geographic area in the island, with a terrain elevation of 400 feet, or more, above sea level. Located in this part are the Defense headquarters, barracks, senior officers quarters, parade ground, ordinance shops and its old Spanish lighthouse. Also, all the major gun emplacements are situated around this elevated ground.

The Middleside of the island is a small plateau that connects the upward slope from the Bottomside to the Topside, and has an elevation of about 100 feet to 400 feet above sea level. The land houses a number of major landmarks and structures in the island. It is the former site of the Young Men's Christian Association (YMCA), Middleside Barracks, Post Stockade, officers club, warehouses, and service and utility buildings.

The Bottomside, on the other hand, is the lower part of the island. It is a flat stretch of land that rises to only about 100 feet (or less) above sea level. Situated in this section of the island are the North and South Dock, Lorcha Dock, and the former site of Barrio San Jose. More contemporary structures can also be found here.

Finally, the remaining part of the island is called the Tail End which stretches to 2 ½ mile. It consists of a low ridge and distinct hills that played important role in World War II. At the eastern part of the strip is a cemetery and the Kindley Field. Many structures and grounds were developed and reconstructed in the Tail End to satisfy the tourists that frequented the island.

Corregidor has been a living witness to the history of the Philippines, and has been held as a significant and strategic site since the Spanish era. The name of the island comes from the Spanish word corregir which means “to correct.” There live two versions of the story. One story claims that during the Spanish colonization, a system directs all ships entering the Manila Bay to stop and have their cargoes checked and documented in the island called Isla del Corregidor (Island of Correction). Another story tells that the island served as correctional institution or penitentiary during the Spanish period and was called El Corregidor.

During the pre-Hispanic time, Corregidor was amply populated by fishermen, and erected along its shores were bases for pirates who often launch attacks to vessel entering Manila Bay. The island also became a signal area in the Spanish era wherein a bonfire was lit to alert Manila of the coming galleon.

In 1795, the Spaniards built a naval dockyard in Corregidor, followed by a naval hospital and a signal station wherein a bonfire is lit to alert Manila of the coming galleon or approaching enemies. A lighthouse was built in 1836, and 17 years later, a stronger light was installed. The small town of San Jose later emerged in the island to serve as the seat of the government. During the American occupation, the barrio turned into a small community, complete with more modern structures and paved streets.

The Spanish forces were defeated by Admiral George Dewey in 1898, and 5 years later, a former garrison established by the Spaniards was converted into a convalescent hospital. In 1907, under the American military government, the island was transformed into a U.S. Military Reservation and many army posts and structures in the island were named after American soldiers who played significant role in the Philippine military history. One fort was named after Brigadier General Samuel M. Mills, who was then the chief of artillery in U.S. Army.

Early 1900s, American soldiers, lead by army engineers of the “H” company, 2nd Battalion of the U.S. Corps of Engineers, focused on building fortifications on the island. Bomb-proof housings were also constructed, as well as more efficient road system. Aside from this, big guns were installed in 1941 to aid the Filipino and American defenders of Bataan against Japanese invaders. These constructions were part of the Harbor Defenses of Manila and Subic Bay, as American soldiers also realized how strategic the island of Corregidor was.

Physically, Corregidor undergone much transformations, but most remarkable of all is the momentous role that the island played in the history of the Philippines.

Corregidor's strategic location, network of tunnels, array of defensive armament and strong fortifications were the reasons why many army operations aspired to get hold of the land. After the fall of Bataan on 9 April 1942, the U.S. Army Forces Far East ended all their attacks against the Japanese invaders in Luzon. The Japanese realized that Corregidor was the remaining barrier to Lieutenant General Masaharu Homma's 14th Japanese Imperial Army, and in order to penetrate Manila Bay, they had to take the island. For General Douglas MacArthur: Whoever controls Corregidor, controls Manila Bay.

From 29 December 1942 to 6 January 1943, Japanese forces organized massive attacks on the island's major fortification causing extensive damage to the American's harbor defense. The Japanese turned their attention once again to Bataan Peninsula which temporarily eased the attacks on Corregidor. One month after, the island was inflicted with much more damages under Masaharu's Army including the formidable Malinta Tunnel, killing about 28 men. Moreover, while bombarding the Filipino and American armies, the Japanese even cut off Corregidor's supply line from Bataan. And so, on 6 May 1942, General Jonathan Wainwright, after consulting Douglas MacArthur, surrendered Corregidor to the Japanese Imperial Army. (For the complete story, see Battle of Corregidor).

From 16 February to 26 February 1946, the American forces commenced their battle for the recapture of Corregidor against the defending Japanese troops in the island. After the fall of Corregidor in 1942, the Japanese took control of the island, however, found the island less important than what it had been under the Americans. But Corregidor remained a formidable gateway to Manila Bay. And so, MacArthur decided to retake the island using two strategies: amphibuous and airborne assaults.

On 23 January 1945, the aerial attacks by the Americans commenced. Daily, tons of bombs were dropped in Corregidor to soften Japanese's defense on it. Naval bombardments also took place. The most violent battle to recapture Corregidor happened at Wheeler Point, starting on the night of 18 February, until morning of 19 February, when 500 suicidal Japanese marines came out of the Battery Smith armory and attacked the Americans. Armed with rifles and automatic weapons, the American paratroopers attacked among the best of Japanese empire's fighting men, the Japanese Special Landing Force. The Americans failed, and the grounds of Corregidor were left with more than 250 corpses. Since then, Wheeler Point was referred to by historians as the “Banzai Point.

While attacking Wheeler Point, the Americans had an eye at the Malinta Hill. A succession of bombardment on the hill killed more than 300 Japanese. About 50 Japanese, who liberated themselves from their entrapment inside the hill, attacked the Americans and mowed them down. On 23 February, American engineers came up with a plan – they poured large quantities of gasoline in the tunnels, sealed the entrances and set tunnel lines on fire. This move quieted down the Malinta Hill, and after this, isolated attacks continued. On 26 February, the American soldiers finally recaptured the island of Corregidor. (For the complete story, see Battle of Corregidor (1945)) 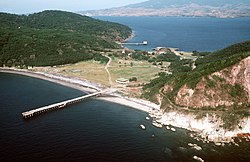 Service aerial view of a portion of the island.

Corregidor is one of the favorite spots of tourists who have thirsts for Philippine history, particularly for relics of war. Today, what was left of the island are the silent witnesses to its bloodiest and most ferocious events – its national treasures, the ruins of the war.