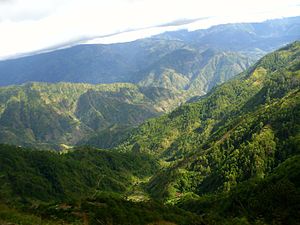 A portion of the range in Benguet surrounding Baguio

To the north, the mountain range terminates at the northern shores of Luzon along the Babuyan Channel in Ilocos Norte and Cagayan provinces.[1] At its southeastern part, the Central Cordillera is linked to the Sierra Madre Mountains, the longest mountain range in the country, through the Caraballo Mountains in Nueva Vizcaya province. During Spanish colonial period, the whole range was called Nueva Provincia, (New Province).[2] 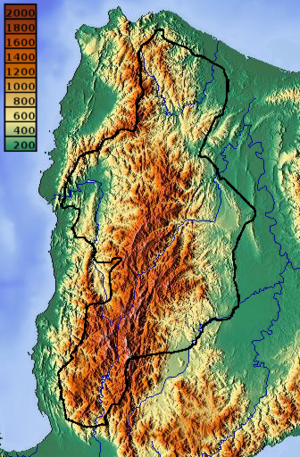 Cordillera Administrative Region (outlined) covers most of the range.

The mountain range separates the Ilocos plains on the west and the Cagayan Valley on the east. It also affects the weather pattern in the island of Luzon in such it acts as a barrier against the Northeast and Southwest monsoons as well as cyclones crossing the island.

This is the biggest and highest mountain chain in the Philippines, measuring 320 km (198 miles) long north to south, and 118 km (73 miles) width east to west, and consists of three ranges. The Malayan Range is located in the northern and western portion of the Cordillera, followed by the Central Range, and then the Polis Range in the eastern portion. Mount Data contains the headwaters for Suyoc, which flows into the Abra River, the Chico flows into the Cagayan River, the Asin flows into the Magat River, and Agno River flows into the Lingayen Gulf.[3]

Three volcanoes with no historical eruptions but still thermally active are located within the Cordillera Central:

List of major river in Cordillera Central by length

The range in Buguias, Benguet

The mountains support a number of different types of habitat. Elevations above Template:Convert are covered in Luzon tropical pine forests of Benguet pine (Pinus insularis) except in the north of the range where the high slopes consist of Luzon montane rain forests. Elevations below 1000 meters are in the Luzon rain forests ecoregion.

Two major problems threaten the environment of the Cordillera: dam projects flood river valleys and remove habitat and also cause people to flee their houses and seek refuge in other areas; mining project destroy forest areas and also don't create wealth and resources for the upkeep of the tribal lands.

Template:Main Most of the Cordillera Central is the ancestral domain of the 'people of the mountains.' These ethno-linguistic groups include: Abra (Itneg), Apayao (Apayao), Benguet (Kankanaey and Ibaloi), Ifugao (Ifugao), Kalinga (Kalinga) and Mountain Province (Bontoc and Kankanaey).[4] Each of these major ethno-linguistic groups has its own family of languages and cultures.

At the time of American rule in the Philippines, the disparate people of the Cordilleras were not well understood and were all lumped together under the name Igorot. In some circles, especially political ones, this term acquired a pejorative characteristic. In current usage, Northern Cordillerans use it disparagingly, when speaking of people from eastern Mountain Province.Template:Citation needed

Beside their own tribal cultures, there is a Cordilleran culture which is largely molded by the geography of the Cordilleras, and their common heritage of resisting the invading imperial powers (Spain, US, Japan in the past – and after 1946 the central government in Manila is also regarded as such), including the continuing adverse encroachments by lowlanders.[4]

Not withstanding their resistance to invasion from the lowlands, the lingua franca used throughout the Cordilleras is Ilocano, adopted from the lowlander traders of Ilocos Region in the west. 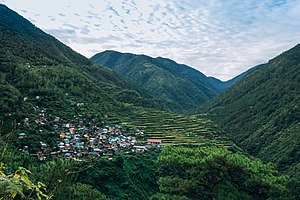 The Cordillera Central is one of the country's richest regions in terms of natural resources, a major resource base of the Philippines. It contains 11% of the total area is agricultural rice fields, orchards, pig farms and pasture lands. 60% of the country's temperate vegetables are produced in the area. It is the country's premier mining district. There are eight big mining companies operating which are mostly foreign controlled. Some 80% of the total Philippine gold production comes from the Cordillera.

The range is also home to the headwaters of the major rivers in Northern Luzon, with several dams which include the Ambuklao and Binga in Benguet.

The Philippines, named after King Philip II of Spain in 1618, was already of interest to Spain before the Spaniards even reached the land. In 1565, reports of huge gold mines in the Cordillera reached the Viceroy of Mexico, which led to the first official Spanish expedition to the Cordillera in 1576. King Philip III, waging the Thirty Year War which needed funding, sent orders for large expeditions to the Philippines. 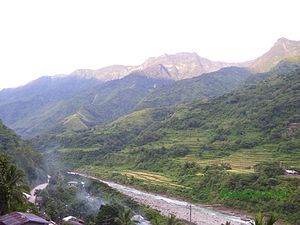 In 1620, Captain Garcia de Aldana Cabrera offered the resisting Igorot tribal leaders clemency if they were willing to accept Catholic religion, obey the Spanish government and pay a fifth of all their mined gold to the Spanish King. They refused and the Spanish conquerors built forts and organized military troops to start the exploitation of the gold mines.

During the years that followed, the Spanish managed to trade gold despite setbacks from the Igorots, who because of their resistance remained relatively independent from Spanish rule. The price that the Igorots had to pay for this independence was that they became different from their colonized brothers.

The Philippines staged Asia's first nationalistic revolution in 1896, and declared its independence on June 12, 1898. The newly founded country was soon taken over by the United States of America. The US was the first foreign nation to fully invade the highlands of the Cordillera to push the mining operations in the territory.

Spain relinquished control of the Philippines to the United States of America due to the Treaty of Paris (1898), which officially ended the hostilities of the Spanish–American War. After a short period of peace in the region after the treaty was finalized the Philippine–American War began until 1902, though pockets of fighting did not end until 1913. The result of these conflicts led to the US declaring the Philippines a protectorate, a form of colonialism with local autonomy. The United States established strategic military bases in the Philippines with the consent of the established government in Manila. During World War II, the Japanese temporarily seized control of the Philippines. A combined effort between the American armed forces and the Philippine commonwealth military managed to successfully drive out the Japanese by 1945.

On September 27, 1927, the Benquet Consolidated Mining Company discovered one of the richest veins of gold ever, at a time when the US was entering the Great Depression. This was the start of a real gold rush into Cordillera region: in 1929, there were 94 mining companies, by 1933 there were 17,812.Template:Citation needed

This extreme growth had tremendous results for the landscape; it changed the original one way Mountain Trail into a busy highway despite the road slides and cuts that occur up to this day. Again, similar to the fight against the Spanish, the indigenous inhabitants protested against the destruction of their land and the neglecting of their rights. Mining operations continued to grow and by 1939 the Philippines ranked among the world's leading gold producers, and second to the state of California among US producers.

From 1936 to 1946, the Philippines was granted domestic self-administration under the Commonwealth of the Philippines as a transitional period for complete independence. From 1941 to 1945, the country fell under Japanese rule and was liberated by military forces of the United States of America, and dare inside by the combined forces of the Allied Philippine Commonwealth military forces and local Igorot and Cordilleran guerrilla forces in Northern Luzon. The US subsequently recognized Philippine independence on July 4, 1946.

The independent republic's policy shifted towards the integration of the 'cultural minorities' into mainstream culture. In 1966 the Philippine Congress passed the 'Separation Bill', dividing the old Mountain Province into four: Benguet, Mountain Province (Bontoc), Ifugao and Kalinga-Apayao. The political elite hoped that the creation of several provinces would, by increasing the region's representation, increase development spending in the area.

Under the Marcos' administration, politicization of the Cordillera took a new turn. National government development projects in the area were against the interests of the indigenous peoples, and were strongly resisted by them. Particularly important were the Chico River Dam project and the Cellophil project. The first threatened to inundate traditional villages, the second gave outsiders control over vast forest lands. Resistance resulted in increased regional consciousness rather than local ethnic consciousness.

In 1986 the dictatorship of Ferdinand Marcos was overthrown by the People Power Revolution of the Philippines and he was succeeded by Corazon Aquino.

However, the Aquino administration failed to tackle substantial issues such as land reform and the restructuring of the economy. After the collapse of the negotiations between the government and the National Democratic Front (NDF), Aquino declared the "Total War Policy", aimed at recovering New People's Army (NPA) controlled areas and to destroy the NPA's organizational and infrastructure base. The NPA had moved into the Cordillera to assist in the resistance against the projects.