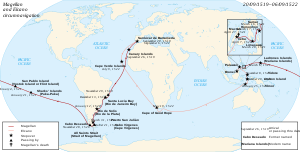 French map of the first world circumnavigation of Ferdinand de Magellan and Juan Sebastián Elcano, from 1519 to 1522.

After Ferdinand Magellan’s death in the Battle of Mactan in the Philippines in April 1521 and following several changes of leadership, the Spanish navigator Juan Sebastián Elcano took charge of the expedition and returned to Spain, thereby completing the first circumnavigation of the world in 1522.

After the death of Magellan and his other officers in the Philippines, the fleet was left with just 115 surviving men and three ships. In the absence of officers Juan Serrano and Duarte Barbosa, Juan Carvalho was elected as the new captain-general. Due to lack of crew, they were forced to abandon the Concepcion and to just sail with the Trinidad and Victoria to search for Moluccas.

The crew spent six months meandering through Southeast Asia, stopping at several islands including Mindanao and Brunei for supplies and engaging in acts of piracy. Due to poor leadership, Carvalho was forcibly replaced by Martin Mendez, with Gonzalo de Espinosa and Juan Sebastian Elcano as captains of the Trinidad and Victoria, respectively. The fleet finally reached the Moluccas on 8 November, landing on the island of Tidore, where they were greeted by its leader, Al-Mansur (or Almanzor). With the help of Al-Mansur, they were able to trade their goods such as cloth, knives, and glassware for tons of cloves and nutmeg, thereby completing their original mission to go to the East Indies or Spice Islands using western route.

On 21 December 1521, Alcano made the momentous decision to sail from Tidore and traveled to the west and crossed unknown waters that fall under the jurisdiction of Portugal under the Treaty of Tordesillas.

Heading across the Indian Ocean, the two vessels momentarily took a break in Borneo. It was decided that the Trinidad, which was found to be leaking water, would have to stay for repair before heading back to Spain via an eastern route. Several weeks later, the Trinidad attempted to return to Spain via eastern route, but was captured by the Portuguese. The ship eventually sank when it caught storm while at anchor under the Portuguese control. Meanwhile, the Victoria under the command of Elcano, set sail via the Indian Ocean. They also passed through Cape of Good Hope, which was controlled by the Portuguese. Some of the crews were detained by the Portuguese after learning that they were carrying spices from the East Indies. They managed to escape with its cargo of spices.

On 6 September 1522, Elcano and the crew arrived in Sanlucar de Barrameda in Spain—three years after they departed. Only 18 men had survived the voyage, which constituted the first journey around the globe. It brought with it a heavy cargo of spices. Antonio Pigafetta’s journal contained the key record of what the crew encountered on their journey home. This was later published as Relazione del primo viaggio intorno al mondo. The other 13 men who were detained by the Portuguese in Cape Verde also returned to Seville, thereby completing the circumnavigation as well. Alcano was later honored by Emperor Charles V with annual pension and augmentation of his coat of arms featuring a world globe with Latin words Primus circumdedisti me or “You first encircled me.”