The Chocolate Hills are a geological formation in the Bohol province of the Philippines.[1] There are at least 1,260 hills but there may be as many as 1,776 hills spread over an area of more than 50 square kilometres (20 sq mi).[2] They are covered in green grass that turns brown during the dry season, hence the name.

The Chocolate Hills is a famous tourist attraction of Bohol. They are featured in the provincial flag and seal to symbolize the abundance of natural attractions in the province.[3] They are in the Philippine Tourism Authority's list of tourist destinations in the Philippines;[4] they have been declared the country's third National Geological Monument and proposed for inclusion in the UNESCO World Heritage List.[4] 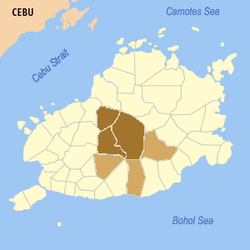 Historical marker explaining the geologic evolution of the area.

The Chocolate Hills form a rolling terrain of haycock-shaped hills – mounds of a generally conical and almost symmetrical shape.[5] Estimated to be from 1,268 to about 1,776 individual mounds, these cone-shaped or dome-shaped hills are actually made of grass-covered limestone. The domes vary in sizes from 30 to 50 metres (98 to 164 ft) high with the largest being 120 metres (390 ft) in height. One of Bohol's best known tourist attractions, these unique mound-shaped hills are scattered by the hundreds throughout the towns of Carmen, Batuan and Sagbayan in Bohol.[6]

During the dry season, the grass-covered hills dry up and turn chocolate brown. This transforms the area into seemingly endless rows of Hershey's "chocolate kisses". The branded confection is the inspiration behind the name, Chocolate Hills.[4]

The Chocolate Hills are conical karst hills similar to those seen in the limestone regions of Slovenia, Croatia, northern Puerto Rico, and Pinar del Río Province, Cuba. These hills consist of Late Pliocene to Early Pleistocene, thin to medium bedded, sandy to rubbly marine limestones. These limestones contain the abundant fossils of shallow marine foraminifera, coral, mollusks, and algae.[8][9] These conical hills are geomorphological features called cockpit karst, which were created by a combination of the dissolution of limestone by rainfall, surface water, and groundwater, and their subaerial erosion by rivers and streams after they had been uplifted above sea level and fractured by tectonic processes. These hills are separated by well developed flat plains and contain numerous caves and springs. The Chocolate Hills are considered to be a remarkable example of conical karst topography.[10][11][12]

The origin for the conical karst of the Chocolate Hills is described in popular terms on the bronze plaque at the viewing deck in Carmen, Bohol. This plaque states that they are eroded formations of a type of marine limestone that sits on top of hardened clay.[13][14] The plaque reads:

The unique land form known as the Chocolate Hills of Bohol was formed ages ago by the uplift of coral deposits and the action of rain water and erosion.[13]

The plaque also makes reference to a fanciful explanation of the origin of the Chocolate Hills that is unsupported by any published scientific research, e.g. either Hillmer[8] or Travaglia and others,[9] when it states: "the grassy hills were once coral reefs that erupted from the sea in a massive geologic shift. Wind and water put on the finishing touches over hundreds of thousands of years."

Self-published, popular web pages present a variety of fanciful and less credible explanations about how these hills formed. They include sub-oceanic volcanism; limestone covered blocks created by the destruction of an active volcano in a cataclysmic eruption;[15] coral reefs that were raised from the sea as the result of a massive geologic shift; and tidal movements.[16] The lack of any exposed or associated volcanic rocks anywhere in the Chocolate Hills refutes the popular theories involving volcanic eruptions. These theories involving either a sudden, massive geologic shift, coral reefs being erupted from the sea, or tidal movements lack any corroborating evidence and support among geologists.[8][9]

Three legends explain the formation of the Chocolate Hills. The first tells the story of two feuding giants who hurled rocks, boulders, and sand at each other. The fighting lasted for days, and exhausted the two giants. In their exhaustion, they forgot about their feud and became friends, but when they left they forgot to clean up the mess they had made during their battle, hence the Chocolate Hills.[13][17]

A more romantic legend tells of a giant named Arogo who was extremely powerful and youthful. Arogo fell in love with Aloya, who was a simple mortal. Aloya's death caused Arogo much pain and misery, and in his sorrow he could not stop crying. When his tears dried, the Chocolate Hills were formed.[18]

The third legend tells of a town being plagued by a giant carabao, who ate all of their crops. Finally having had enough, the townsfolk took all of their spoiled food and placed it in such a way that the carabao would not miss it. Sure enough, the carabao ate it, but his stomach couldn't handle the spoiled food, so he defecated, leaving behind him a mound of feces, until he had emptied his stomach of the food. The feces then dried, forming the Chocolate Hills.

The National Committee on Geological Sciences declared the Chocolate Hills of Bohol a National Geological Monument on June 18, 1988, in recognition of its special characteristics, scientific importance, uniqueness, and high scenic value. As such, this included the Chocolate Hills among the country's protected areas. More protection was provided by Proclamation No. 1037 signed by then President Fidel V. Ramos upon the recommendation of the DENR on July 1, 1997 which established the Chocolate Hills and the areas within, around, and surrounding them located in the Municipalities of Carmen, Batuan and Sagbayan, Bilar, Valencia and Sierra Bullones, Province of Bohol as a natural monument to protect and maintain its natural beauty and to provide restraining mechanisms for inappropriate exploitation.[22] As such, they are covered under the National Integrated Protected Areas System (NIPAS) with the Department of Environment and Natural Resources (DENR) as the lead implementing agency for its protection.[23]

Land-use conflict prompted Philippine President Gloria Macapagal-Arroyo to sign an amendment to Proclamation 468 dated September 26, 1994 declaring the land around or in between Chocolate Hills as no longer part of the national monument during the Bohol Sandugo Celebration on July 17, 2002. This amendment allowed the tracts of land surrounding and within the famous tourist spot to be developed by the provincial government and other entities that have control over the area. Further, the amended proclamation ensures that the areas that have to be preserved are preserved, while those that could be developed would be excluded from the national monument area and classified as alienable and disposable by the government. The President initially decided on the issue during the joint meeting of the Regional Development Council-Regional Peace and Order Council (RDC-RPOC) of Region VII which was conducted at the Bohol Tropics Resort.<[24]

Bills have been filed aiming to strengthen protection of the hills. On July 6, 2004, the Philippine House of Representatives introduced House Bill No. 01147 entitled "an act declaring the Chocolate Hills as national patrimony and geological monuments, penalizing their plunder, destruction or defacement, and for other purposes." The house bill is authored by Congressman Eladio "Boy" Jala and co-authored by Congressman Roilo Z. Golez and Edgar M. Chatto.[23] Though this has not been passed into law.

On May 16, 2006, the Department of Environment and Natural Resources (DENR) submitted the Chocolate Hills to the UNESCO World Heritage for inclusion in the list of Natural Monuments because of its outstanding universal value, falling under criteria vii – superlative natural phenomena or areas of exceptional natural beauty and aesthetic importance. The protection, management, authenticity and integrity of properties are also important considerations.[4]

Amidst reports that quarrying has leveled off some of the mounds, Governor Erico Aumentado, the governor of Bohol, issued Administrative Order No. 3, series of 2006, which prohibits the issuance of quarry permits and favorable endorsements of mining permit applications in Carmen, Batuan and Sagbayan towns to forestall any degradation of the Chocolate Hills – no matter who applies for such.[25]

The hills are already declared geological monuments and are covered under the National Integrated Protected Areas System (NIPAS) for which the Department of Environment and Natural Resources (DENR) is the lead implementing agency. Aumentado said: Template:Quote