To read this article in Filipino, see Chito Gascon 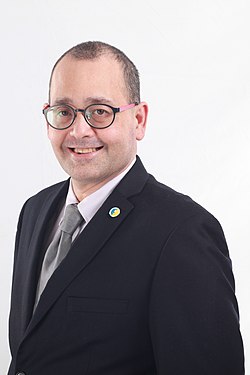 José Luis Martín C. Gascón (26 May 1964 – 9 October 2021), also known as Chito Gascon, was a Filipino lawyer, community organizer, and human rights activist. He was appointed by then President Benigno Simeon Aquino III as the Chair of the Commission on Human Rights (CHR) and served from 2015 to 2021. He demanded that perpetrators of the killings and other human rights violations resulting from the Duterte government’s so-called “War on Drugs” be held accountable.

As a member of the Human Rights Victims’ Claims Board (HRVCB), he held a rank equivalent to Justice of the Court of Appeals. The HRVCB was tasked to receive, evaluate, investigate, and adjudicate claims by human rights violations victims (HRVVs) for reparation and/or recognition.

Gascon was the youngest member of the 1987 Constitutional Commission that helped draft the Constitution of the Philippines. As a member of the House of Representatives, he spearheaded the passage of legislation for the Sangguniang Kabataan and Republic Act 7610, a special law providing protection to children from abuse.

He taught Law, Politics, & Human Rights at the Political Science Departments at both the Ateneo de Manila University (ADMU) and De La Salle University (DLSU). He was also a Fellow at the Robredo Institute of Governance (RSIG).

Gascon graduated with a Bachelor of Arts Degree in Philosophy and Bachelor of Laws Degree from the University of the Philippines Diliman. He earned a Master of Law Degree specializing in Human Rights, Law of Peace, and Settlement of International Disputes from St. Edmund’s College, University of Cambridge.

He attended the Summer Institute on Human Rights administered by the International Institute for Human Rights with the European Human Rights Mechanisms in Strasbourg, France in 1997. He also attended specialized seminars at the Theodor Heuss Academy for Freedom in Gummersbach, Germany and with the Center for Democratic Initiatives at the Australian National University in Canberra, Australia.

As a student leader, Gascon fought the Ferdinand Marcos dictatorship. In the wake of Senator Ninoy Aquino’s assassination on 21 August 1983, he helped mobilize protest actions in schools to demand justice for all and radical political change. He was elected Chair of the University of the Philippines UP Student Council in 1985 and led the youth movement that actively participated in the non-violent People Power Revolution in February 1986. He also organized Human Rights Awareness Fairs in campuses. He was also an active board member of Amnesty International Philippine Section.

He served as Undersecretary of the Department of Education (DepEd) from 2002 to 2005 and served at the Political Affairs Department of the Office of the President from 2011 to 2014. He was also a Board Member of the Bases Conversion Development Authority (BCDA) from 2010 to 2011.

On 18 June 2015, Gascon was appointed by President Benigno Simeon Aquino III as the new Chair of the Commission on Human Rights (CHR) and succeeded Etta Rosales, who retired in 2015. Gascon served as CHR Chair from 2015 to 2021.

As CHR chair during President Rodrigo Duterte's administration, Gascon fought to uphold the rule of law amid Duterte's bloody drug war. He was attacked by Duterte and administration allies who called on him to step down. The CHR has documented and investigated 3,423 drug-related extrajudicial killings as of 31 August 2021, despite difficulties in obtaining documents important to investigations.

Gascon also actively campaigned for the release of political prisoners and visited detention centers with Lingap Bilanggo. He was a member of Liberal International’s Human Rights Committee and the Inter-Agency Committee on Extra-Legal Killings and Enforced Disappearances. He was part of the Official Delegation for the 2012 Universal Periodic Review at the Human Rights Council in Geneva, which was led by then Department of Justice (DOJ) Secretary and former CHR Chair Leila De Lima.

Gascon was a member of the following civil society political alliances working for human rights and democracy:

Gascon passed away following his bout with COVID-19 at the age of 57. He also suffered from diabetes, which made him most vulnerable to COVID.

Former colleagues and friends paid tribute to him and expressed their grief and sympathies. CHR spokesperson Jacqueline Ann de Guia described Gascon as an inspirational and nurturing leader who impressed personnel and fellow human rights workers. European Union (EU) Ambassador to the Philippines Luc Veron considered Gascon EU’s friend and partner in upholding human rights and dignity for all in the Philippines. French Ambassador to the Philippines Michèle Boccoz remembered Gascon as a good friend of France in upholding shared values of democracy and human rights.