It is Samar's main commercial, trading, educational, financial and political center. The city is the gateway to the region's three Samar provinces.

Catbalogan's patron saint is St. Bartholomew the Apostle whose feast day is August 24. 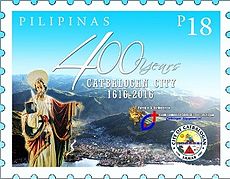 2016 stamp dedicated to the 400th anniversary of Catbalogan City.

Catbalogan City was founded in October 1596 by Spanish Jesuit priests and became the capital of the entire island of Samar. Friar Francisco de Otazo, S.J., who arrived in the Philippines in 1596, founded the Catbalogan Mission and was thus the first missionary to bring the Catholic faith to the people of Catbalogan. In 1627, Catbalogan was raised to the status of residencia (residence or central house) and among its dependencies were Paranas where in 1629 Father Pedro Estrada actively evangelized the area and Calbiga where he took whiterocks or grey limestone to use as building blocks for its church. The church has some arc-like stone roof that was pasted together to dry on each block, giving an arching force to the side. On October 17, 1768, Catbalogan was ceded to the Franciscans who took over from the Jesuits. The first Franciscan parish priest was Fray Jose Fayo, OFM.

During the early days of Spanish colonization of the Philippines in the 16th century, Samar was under the jurisdiction of Cebu but later was declared a separate province. In 1735, Samar and Leyte were united into one province with Carigara, in Leyte, as the capital. The union, however, did not prove satisfactory. In 1768, Catbalogan City became the provincial capital when Samar separated from Leyte and became an independent province.

On December 31, 1898 during the Philippine Revolution, Vicente Lukban arrives on Catbalogan City. The rest of the authorities in Samar are now under his jurisdiction.

On January 27, 1900, the Americans captured Catbalogan City during the Philippine–American War (1899–1902). On June 17, 1902, a provincial civil government was established on Samar Island by an act of the Philippine Commission with Julio Llorente of Cebu as the first governor of Samar.

On May 24, 1942, during World War II, Japanese forces landed in Barrio Pangdan on early morning and occupied the capital. On December 18, 1945, American and Filipino forces liberated Catbalogan City from the Japanese.

On June 19, 1965, the Philippine Congress, along with the province's three congressmen, Eladio T. Balite (1st District), Fernando R. Veloso (2nd District) and Felipe J. Abrigo (3rd District), approved Republic Act No. 4221 dividing Samar into three provinces, namely Western Samar, Eastern Samar and Northern Samar, respectively. Catbalogan City thus ceased to be the capital of the whole island-province after enjoying the prestige of being the premier town of Samar for 197 years since 1768.

On June 21, 1969, under Republic Act No. 5650, Western Samar was renamed Samar with Catbalogan City remaining as the capital.

The greatest calamities to occur in Catbalogan City were big fires. The April 1, 1957 conflagration, considered as the most destructive one, caused damage to properties in the amount of thirty million pesos. The next was on May 19, 1969, where damage was estimated at twenty million pesos and the more than century-old Saint Bartholomew Roman Catholic Church was razed to the ground. Paradoxically, like the proverbial Phoenix, each time Catbalogan City suffered under the throes of these calamities, better buildings and infrastructures emerged from the ashes.

As early as 1960, Catbalogan already agitated to become a city. In 1969, Rep. Fernando P. Veloso sponsored House Bill No. 1867 creating Catbalogan into a city. The bill was being deliberated in the Philippine Senate, but the blaze of 1969 unfortunately caused it to be shelved. Subsequent efforts were made by Catbalogan political leaders, including former Representative Catalino V. Figueroa, during his term, to make Catbalogan's cityhood dream a reality despite strong and rabid opposition by the League of Cities of the Philippines, particularly Catbalogan City's neighboring Calbayog under the administration of Mayor Mel Senen Sarmiento.

On March 15, 2007, Catbalogan finally attained its cityhood. Under the sponsorship of Senator Alfredo S. Lim and by virtue of Republic Act No. 9391, Catbalogan was converted into a component city known as the CITY of CATBALOGAN following a unanimous vote by the Philippine Senate. Senator Manuel Villar, Jr. (President of the Senate), Congressman Jose De Venecia, Jr. (Speaker of the House of Representatives), Oscar G. Yabes (Secretary of the Senate), Roberto P. Nazareno (Secretary General, House of Representatives) and Gloria Macapagal-Arroyo (President of the Philippines) were among its signatories. The residents of Catbalogan overwhelmingly ratified this change through a Comelec plebiscite on June 16, 2007 with over 92% "Yes" votes for cityhood.[3]

However, Catbalogan temporarily lost its cityhood, along with 15 other cities, after the Supreme Court of the Philippines, in a very close 6–5 vote, granted a petition filed by the League of Cities of the Philippines, and declared the cityhood law (RA 9391) which allowed the town to acquire its city status, unconstitutional.[4]

On December 10, 2008, Catbalogan and the other 15 cities affected filed a motion for reconsideration with the Supreme Court. More than a year later, on December 22, 2009, acting on said appeal, the Court reversed its earlier ruling as it ruled that "at the end of the day, the passage of the amendatory law (regarding the criteria for cityhood as set by Congress) is no different from the enactment of a law, i.e., the cityhood laws specifically exempting a particular political subdivision from the criteria earlier mentioned. Congress, in enacting the exempting law/s, effectively decreased the already codified indicators."[5] As such, the cityhood status of Catbalogan was effectively restored.