It is located Template:Convert north from the provincial capital Dumaguete and is bordered on the east by Vallehermoso and on the south by Guihulngan.

Canlaon is home to the highest peak in its own province and its corresponding island, Kanlaon Volcano, which is Template:Convert above sea level at its highest point.

The Banyan Tree inside the OISCA Farm is estimated by botanists from Silliman University to be around 1,300 years old. It is home to lizards, bats, and a variety of insects. It may be considered as Canlaon City's main tourist attraction.

Canlaon was formerly a part of Vallehermoso as Sitio Mabigo of Barrio Panubigan. In 1941, Isidoro Bautista Sr., a geodetic engineer, along with its residents petitioned the Philippine government to convert Mabigo into a separate municipality.

During the Second World War, the Japanese Imperial Army captured Canlaon City in 10 April 1942, right after the Battle of Bataan. The Japanese occupation of the city ended in early 1945 when soldiers from the Eighth United States Army under Lieutenant General Robert Eichelberger including the 40th Infantry Division (United States) and the 23rd Infantry Division (United States), landed in Negros Island to drive out the Japanese. On liberating Negros Island, they were assisted by newly formed Philippine Commonwealth Military Forces & local Negrense guerillas who helped in clearing out Japanese pockets of resistance throughout the island. In fact, the honor of liberating Canlaon City from the Japanese went to Philippine Commonwealth soldiers belonging to the 7th, 71st, 73rd and 75th Infantry Regiments of the Philippine Army, the 7th Constabulary Regiment of the Philippine Constabulary and Negrense Guerillas.

Creation as a municipality

Lorenzo Teves, congressman of the first district of Negros Oriental, filed House Bill 4346, regarding the conversion of Canlaon into a city. The bill became Republic Act 3445. However, President Carlos P. Garcia did not signed the bill. It was only on April 20, 1967, when president Ferdinand Marcos signed Proclamation no. 193, making the municipality as a city. It took effect on July 2, 1967, making Canlaon as the 2nd city in the province. 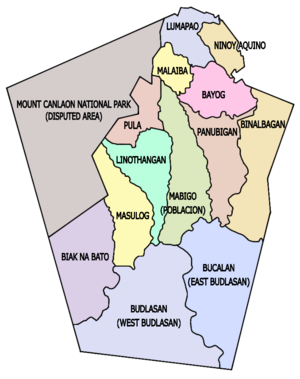 Cebuano is the main dialect of Canlaon City but Hiligaynon is also spoken due to its border with Negros Occidental. Tagalog and English are rather used as second dialects.