Camiguin (Template:Lang-ceb; Template:Lang-tl; Kamigin: Probinsya ta Kamigin) is an island province in the Philippines located in the Bohol Sea, about Template:Convert off the northern coast of Mindanao. It is geographically part of Region X, the Northern Mindanao Region of the country and formerly a part of Misamis Oriental province.

Camiguin is the second-smallest province in the country in both population and land area after Batanes.[1] The provincial capital is Mambajao, which is also the province's largest municipality in both area and population.

The province is famous for its sweet lanzones, to which its annual Lanzones Festival is dedicated and celebrated every third weekend of October. It is home to lush interior forest reserves, collectively known as the Mount Hibok-Hibok Protected Landscape, which has been declared by all Southeast Asian nations as an ASEAN Heritage Park. The province also boasts three National Cultural Treasures, namely, the Old Bonbon Church ruins in Catarman, the Sunken Cemetery of Catarman, and the Spanish-era watchtower in Guinsiliban. The three sites were declared for “possessing outstanding historical, cultural, artistic and/or scientific value which is highly significant and important to the country and nation.”

Additionally, the island province has numerous Important Cultural Treasures, such as the Old Mambajao Fountain - situated in the town's rotonda, the Old Mambajao Municipal Building, the façade of the Santo Rosario Church in Sagay, and 14 heritage and ancestral houses. The sites were declared for “having exceptional cultural, artistic and historical significance to the Philippines.” All cultural treasures were declared by the National Commission for Culture and the Arts. There have been moves to establish a dossier nomination for the province to be included in the UNESCO World Heritage List.[2]

The name Camiguin is derived from the native word Kamagong, a species of ebony tree that thrives near Lake Mainit in the province of Surigao del Norte, the region from which the earlier inhabitants of the islands, the Manobos, originated. Kamigin, the local dialect of Camiguin, is the northernmost variant of the Manobo languages.[3]

An earlier Spanish geography book spells the island as Camiguing. There is reason to suppose the Spaniards dropped the final g,[4] given how the phoneme /ŋ/ does not exist in Spanish. Today it is rendered as Camiguín.

The island of Camiguin is believed to have been first inhabited by the Manobo people of Surigao del Norte, as evidenced by the distinctly connected language between the two groups. The island was used as a trading stop point by various merchants and traders from the Rajahnate of Butuan, the Kedatuan of Dapitan, the ancient people of the Anda peninsula, and possibly the Rajahnate of Cebu and the animist Maranao of Lanao before the Islamization of the Lanao provinces.

Old Spanish documents indicate that the renowned explorers Ferdinand Magellan and Miguel Lopez de Legaspi landed in Camiguin in 1521 and 1565, respectively. The first Spanish settlement was established in 1598 in what is now Guinsiliban. Guinsiliban, which comes from the old Kinamiguin word Ginsil-ipan (which means “to look out for pirates from a watchtower”) has an old Spanish watchtower where the Camiguinons kept watch for Moro pirates.[5]

The first major Spanish settlement, established in 1679, was called Katagman or Katadman (known as Catarman). The settlement grew and prospered but was destroyed by the eruption of Mt. Vulcan in 1871. The former location is what is now Barangay Bonbon of Catarman.[5]

Sagay, located south of Catarman, was formally established as a town in 1848. The word Sagay is derived from the name of poisonous fruit trees that grow in the area. Mambajao became a town in 1855. The name was coined from the Visayan terms mamahaw, meaning to usher breakfast, and bajao, which is leftover boiled rice. In the early 1900s, Mambajao prospered and became the busiest port in Northern Mindanao. Mahinog was established as a municipality in 1860. The name Mahinog comes from a Visayan word meaning "to ripen" or "to become ripe". Although Guinsiliban was the oldest settlement in the island, it was only in 1950 that it became a municipality. Mahinog was formerly governed by Mambajao while Guinsiliban was formally governed from Sagay.[5]

In 1901, in the middle of the Philippine–American War, American soldiers landed in Camiguin to assume political control over the island. A group of Camiguinons, armed with bolos and spears, led by Valero Camaro, fought them in a short battle in Catarman. Valero Camaro was killed by a bullet in the forehead and became one of the Camiguin patriots of the early independence movement.[5]

On June 18, 1942, the Japanese Imperial Army landed in Camiguin and set up a government in Mambajao. They gutted central Mambajao in reprisal to guerrilla activities in the area. The remains of some of these buildings still exist today.[5]

The province consists primarily of Camiguin Island, as well as a few other surrounding minor islets including:

Camiguin comprises five municipalities, which are further subdivided into a total of 58 barangays.[1] 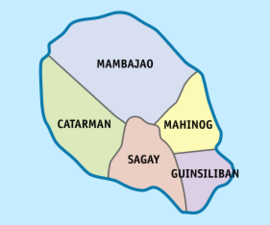 The people of Camiguin are called Camiguingnon or Camiguinon (Template:Lang-es). Cebuano is the most spoken language in the province, although Kinamigin is considered to be the indigenous language. Today, Kinamigin is still spoken by few in the municipalities of Sagay and Guinsiliban.[9] Tagalog and English are also widely spoken and understood by the local population.[10] 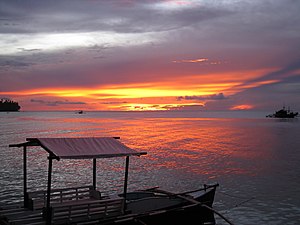 The economy is based upon fishing and farming, with copra providing the greatest income contribution. Lanzones has since then became the main agricultural product of the island province.[10] Other agricultural products are abaca, rice, mangoes and other fruit trees. The growing tourism industry has improved the economy of the province. Small cottage industries have increased in number to accommodate the influx of visitors.

Camiguin has three colleges, all located in Mambajao: Fatima College of Camiguin (FCC), Camiguin Polytechnic State College (CPSC), with a satellite campus in Catarman, and Camiguin School of Arts and Trades (CSAT. A complete secondary and elementary education is provided as well, both in private and public schools. There are also day care centers offering nursery and pre-school education.

The province has a total number of 68 day care centers managed by the Department of Social Welfare and Development (DSWD) and 56 public and private elementary schools. There are 13 secondary schools, 3 private institutions, and the rest government-owned. There is one special school, which accommodates underprivileged or special children, the Family-to-Family School and Farm. It is managed by a Non-Government Organization (NGO).

Lanzones Festival, where the lanzones fruit is celebrated by the whole island every third week Of October in Mambajao

Each year in the third week of October, a festival is held to celebrate the Lanzones (locally called bwahan/buahan), a small grape-sized tropical fruit grown all over the island. Lanzones grown in Camiguin is considered to be the sweetest. The unique flavor is due to the richness of the volcanic soil. The week-long Lanzones Festival is one of numerous colorful events in the Philippines.

Several centuries-old Spanish Colonial and 20th century churches are found in various parts of the island.

The province is dotted with numerous heritage structures and zones from the classical, Spanish, and American eras, but most of its heritage sites are from the 300-year Spanish colonial era. 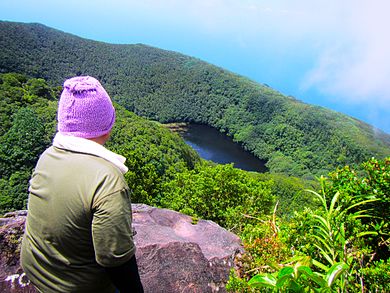 The island of Camiguin, of volcanic origin, is composed of four stratovolcanoes. Each volcano (except Mount Guinsiliban) is made up of several flank domes.[12] The only volcano in the island with historical eruptions is Hibok-Hibok, which last erupted in 1953.

Below are the list of volcanoes, arranged with respect to its location from north to south:

Located just a few kilometers off the coast are the two islands of Camiguin.

During the volcanic birth of Mt. Vulcan lasting from 1871 to about 1875, some areas in the town of Bonbon subsided, sinking the cemetery of the town to below sea level. The place is commemorated by a huge cross erected in 1982.[17]

Since then the municipality of Bonbon has been transferred to the town of Catarman.

At least five vertebrate species are believed to be endemic to Camiguin:

Ferry to Camiguin with Mount Guinsiliban in the background

On February 16, 1871, earthquakes began to be felt on the island, which increase in severity until April 30, when a volcanic fissure opened up 400 yards southwest of the village of Catarman, northwest of Hibok-Hibok Volcano. Mt. Vulcan was born and continued erupting pouring lava into the sea at the same time gaining in height and width. In 1875, the Challenger expedition visited the area and described the mountain as a dome, Template:Convert in height, without any crater, but still smoking and incandescent at the top.[4]

The town of Catarman was destroyed and portion of the town sank beneath the sea. The settlement moved to where the town center is presently located and today, all that remains of old Catarman are the ruins of the ancient Spanish church, a convent and a bell tower.

From 1948 to 1951, Mt. Hibok-Hibok was constantly rumbling and smoking. The first minor eruption in 1948 caused little damage and loss of life, but in 1949, the larger eruption caused 79 deaths due to pyroclastic flows. The largest eruption occurred the morning of December 4, 1951. The volcano unleashed lava flows, poisonous gases, and pyroclastic flows destroying nearly 19 squares kilometers of land, particularly in Mambajao. All in all, over 3,000 people were killed. Before the eruption of Mt. Hibok-Hibok in 1951, the population of Camiguin had reach 69,000. After the eruption, the population was reduced to about 34,000 due to massive out-migration.[5] [14]

A disastrous typhoon hit the province in the dawn of November 7, 2001. The tropical storm named Lingling (local name Nanang) brought buhawi (torrential downpours) on the mountains causing multiple massive mudslides killing about 200 inhabitants, most were missing.[23]