The city serves as the gateway to the Oriental Mindoro province with the implementation of the Strong Republic Nautical Highway (SRNH) an integrated ferry project of then President Gloria Macapagal Arroyo that extends further to the southern part of the Philippines. The Calapan City Seaport is the largest and busiest seaport on Mindoro Island, which is just 45 minutes away by ferry boats and roll-on/roll-off (RORO) ships to-and-fro Batangas City International Seaport.

Calapan is one of two cities in the Mimaropa region, the other being Puerto Princesa in Palawan. Calapan serves as the region's administrative center. It is also the center of commerce, industry, transport, communication, religious activities and education in the entire province of Oriental Mindoro.

Calapan was formerly a small village before the establishment of the first Religious District in Baco. The District convent was transferred to Calapan in 1733 and began its jurisdiction over the Northern Mindoro Ecclesiastical Area.[1]

In the early 18th century, the town only occupied a strip of land stretching from Ibaba to Ilaya in a cross-shape facing the present church and cut off by the river. Later on, succeeding barrios were founded.

When Mindoro was detached from Marinduque on November 10, 1902, Baco, Puerto Galera and San Teodoro were annexed to Calapan in 1905 under Act. 1280, adding a total area of Template:Convert. of land. In 1902, under Act 2824, the three municipalities gained their independence.

In 1919, the boundary dispute between Calapan and Naujan was adjudicated by Presidentes (Mayors) Agustin Quijano of Calapan and Agustin Garong of Naujan over a portion of the territory of what is now known as the present boundary. The portion of agricultural area was awarded to Naujan, thus, making the area of Calapan much smaller as compared to that of Naujan which is now considered as the biggest municipality of the province.

In the year 1998, Calapan was converted from a municipality into a component city by virtue of Republic Act No. 8475. The law was authored in Congress by Rep. Renato V. Leviste and was signed by President Fidel Ramos on February 2, 1998. On March 21, 1998, the people of Calapan ratified the creation of the City of Calapan in a plebiscite marking the same day as the city’s foundation day. Incumbent Mayor Arnan C. Panaligan became the last Municipal Mayor and the first City Mayor of Calapan. To date, it is the first and only city in the whole island of Mindoro.[1]

Calapan was reclassified from a 4th class city in 2007 to a 2nd class city in 2010, on account of its innovations in public service, modernization programs, increased revenue collection, and overall economic improvement.Template:Citation needed

The derivation of the name of Calapan cannot be traced with certainty. Some opined that it came from the word “Kalap” which means to gather logs. Thus “Kalapan” was supposed to be a place where logs were gathered. In the old records, however, there was never a mention of Calapan as a place where logs were produced or exported. Furthermore, huge forest trees where logs were produced certainly did not grow near the town, which was swampy. Another theory holds that Calapan was originally pronounced as “Kalapang” which, according to an old Tagalog dictionary, was a synonym for “sanga” or branch. It could then refer to the settlement of Kalapang as a branch of its mother town of Baco, an adjoining town. The name was later hispanized as Calapan.Template:Citation needed

The city has an area of Template:Convert and is composed of 62 barangays of which 22 are classified as urban and 40, rural. The city also has jurisdiction over the Baco Islands and the two Silonay Islets on Calapan Bay.

The overall land characteristic is a wide plain with rivers, interspersed with wetlands at the seacoast periphery. The highest elevation is Template:Convert above sea level at Bulusan Hill, a Template:Convert long landform east of the city, which interrupts the mostly flat terrain north-east of the Halcon-Baco Mountain Range.

Calapan's climate is described as mild. It is relatively dry from November to April and wet during the rest of the year. February and March have the least rainfall while October and November are the months of greatest rainfall. Average yearly rainfall is Template:Convert at the City’s south-west portion. The average daily temperature is Template:Convert.

Climate is favorable for vegetation throughout the year under the Type III climate type of the Philippine weather bureau, PAGASA, with relative humidity at 81%. 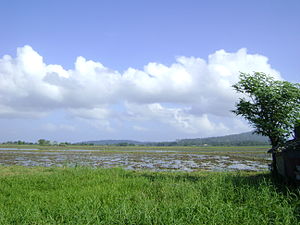 Vast ricefields such as this one in Barangay Bayanan II is a common scenery in Calapan.

The city's economy is dependent on agriculture and fishing. However, a growing industry in machinery and tourism has contributed well to the city's annual income making it one of the fastest growing new cities in the country for the last 10 years.

Since 1998, the city has experienced rapid development. The establishment of a special development area, particularly an eco-zone for light industries located at the Urban Development Area (Lumangbayan and Guinobatan), has been promoted and now serves as growth area which generates employment and spurs economic opportunities. Such industries focus on agro-industrial based activities such as food processing, handicraft making, furniture making and other related activities.

Calapan plays a major role in the Philippine economy as one of the major food suppliers in the country. The city is also a major exporter of rice supplying to Metro Manila and major parts of Luzon making it both an agriculturally-progressive and urbanized city. The five major crops are rice, citrus, banana, rambutan and lanzones. The top five industries in Calapan are trading, tourism, services, marine and aquatic, and food processing.

Calapan serves as the province’s industrial hub. It plays a pivotal role in the economic development of the province and its adjacent areas.

Trading and commercial activities are mainly confined in wholesale and retail trade. Other thriving industries are manufacturing, financing, tourism, food and beverages and services. In recent years, the city has witnessed the influx of private investments that increase income and employment opportunities. The City Investment Code encourages new and existing entrepreneurs to increase their investments. All business establishments are also required to employ bonafide residents of the city to at least 70% of the job opportunities that they will generate.

Majority of the vast agricultural lands of Calapan is devoted to rice production. Other crops grown in the area are citrus fruits such as calamansi, banana, lanzones, rambutan, mango, coconut and vegetables.

The Port of Calapan

Port of Calapan is the primary seaport serving the city which connected through routes to the Port of Batangas City in mainland Luzon. Motorized tricycles are a common mode of transport and jeepneys and vans served as transportation options to other municipalities within Oriental Mindoro which passes through the mostly concreted pronvincial road spanning the province.

The city also has an airport, the Calapan Airport, classified as a secondary airport and is used for general aviation handling mostly small planes and choppers with regular trips from Manila Domestic Airport.

There are currently two public institutions of higher learning in the city. One is the Mindoro State University (Calapan Campus) while the other is the City College of Calapan which was opened last June 2008 through the initiative of City Mayor Salvador Leachon.[2]

The city is served primarily by the Oriental Mindoro Medical Center which is also the largest hospital in the province. There are also numerous private hospitals in the city such as the Medical Mission Group Hospital and Health Services Cooperative which is the only tertiary level hospital in the region, Maria Estrella General Hospital, Santa Maria Village Hospital, Hospital of the Holy Cross and the Luna-Goco Medical Center.

In addition, the city has public health centers providing free health check-ups and basic medicine supplies to all residents. These public centers are being funded and supported by the City Health and Sanitation Department.

The City of Calapan is divided into 62 barangays, (the smallest local government units) which handles governance in a much smaller area. These barangays are grouped into congressional districts where each district is represented by a congressman in the country's House of Representatives.