Calamansi (Citrus × microcarpa),[1] also known as calamondin,[2] Philippine lime,[3] or Philippine lemon,[4] is an economically important citrus hybrid predominantly cultivated in the Philippines. It is native to the Philippines, Borneo and Sulawesi in Indonesia in Southeast Asia, as well as southern China and Taiwan in East Asia. Calamansi is ubiquitous in traditional Filipino cuisine. It is used in various condiments, beverages, dishes, marinades, and preserves. Calamansi is also used as an ingredient in Malaysian and Indonesian cuisines.

Calamansi is a hybrid between kumquat (formerly considered as belonging to a separate genus Fortunella) and another species of Citrus (in this case probably the mandarin orange).[5] 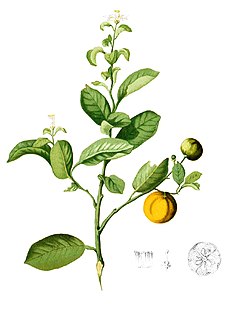 Calamansi is the Philippine English spelling of Tagalog kalamansi, and is the name by which it is most widely known in the Philippines. In parts of the United States (notably Florida), calamansi is also known as "calamondin", an old name from the American period of the Philippines. It is an anglicized form of the alternate Tagalog name kalamunding.[2][6][7] Other English common names of calamansi include: Philippine lime, calamonding, calamondin orange, calamandarin, golden lime, Philippine lemon, Panama orange (also used for kumquats), musk orange, bitter-sweets and acid orange.[8][4]

Calamansi was formerly identified as Citrus mitis Blanco, C. microcarpa Bunge or C. madurensis Lour., all those referred to it as a citrus. Swingle's system of citrus classification would put kumquats into a separate genus, Fortunella, making the calamansi an intergeneric hybrid, and in 1975 it was given the hybrid name × Citrofortunella mitis by John Ingram & Harold E. Moore based on Blanco's species name,[9] but in 1984, D. Onno Wijnands pointed out that Bunge's species name, C. microcarpa (1832), predated Blanco's Citrus mitis (1837), making × Citrofortunella microcarpa the proper name.[10] Phylogenetic analysis now places the kumquat within the same genus as other citrus, meaning that its hybrids, including those formerly named as × Citrofortunella, likewise belong in Citrus.[1]

Calamansi is most widely cultivated in the Philippines, where it is called kalamansî in Tagalog, kalamunding by the Kapampangan and Pangasinan people; and limonsito, suha or simuyaw by the Visayans. In Malaysia it is known as limau kasturi; and in Sri Lanka as hinnāraṁ (හින්නාරං). Calamansi also grows in the northern parts of Indonesia, southern China, and Taiwan. It is available year-round in the Philippines and is usually seen in its unripened green state. When left to ripen it turns a tangerine orange.[11]

Calamansi, Citrus x microcarpa, is a shrub or small tree growing to 3–6 m (9.8–19.7 ft). The plant is characterized by wing-like appendages on the leaf petioles and white or purplish flowers. The fruit of the calamansi resembles a small, round lime, usually 25–35 mm (0.98–1.38 in) in diameter, but sometimes up to 45 mm (1.8 in). The center pulp and juice is the orange color of a tangerine with a very thin orange peel when ripe. Each fruit contains 8 to 12 seeds.[12]

There is also a variegated mutation of the regular calamansi, showing green stripes on yellow fruit.[13]

Calamansi is used in its partly ripe stage with soy sauce, vinegar, and/or labuyo chili as part of the most ubiquitous dipping sauce in Filipino cuisine, like in siomai

The fruits are sour and are often used for preserves or cooking. The calamansi bears a small citrus fruit that is used to flavor foods and drinks. Despite its outer appearance and its aroma, the taste of the fruit itself is quite sour, although the peel is sweet. Calamansi marmalade can be made in the same way as orange marmalade. Like other citrus fruits, the calamansi is high in vitamin C.[14]

The fruit can be frozen whole and used as ice cubes in beverages such as tea, soft drinks, water, and cocktails. The juice can be used in place of that of the common Persian lime (also called Bearss lime).[15] The juice is extracted by crushing the whole fruit, and makes a flavorful drink similar to lemonade. A liqueur can be made from the whole fruits, in combination with vodka and sugar.[16] 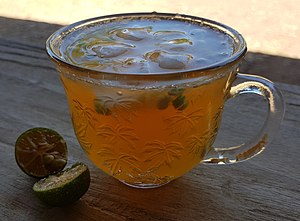 Calamansi juice from the Philippines

In Filipino cuisines, the juice is used to marinate and season fish, fowl and pork. It is also used as an ingredient in dishes like sinigang (a sour meat or seafood broth) and kinilaw (raw fish marinated in vinegar and/or citrus juices). It is very commonly used as a condiment in dishes like pancit or lugaw, or in the basic sawsawan (dip) of calamansi juice and soy sauce/fish sauce used for fish, spring rolls, dumplings and various savoury dishes. It is also used in various beverages, notably as calamansi juice, a Filipino drink similar to lemonade.[17]

The fruit is used in local recipes in northern Indonesia, especially around the North Sulawesi region. Fish are spritzed and marinated with the juice prior to cooking to eliminate the "fishy" smell. Kuah asam ("sour soup") is a regional clear fish broth made with calamansi juice.[18]

In Florida, the fruit is used in its fully ripe form with a more mature flavor profile than the unripe version. Tasters note elements of apricot, tangerine, lemon, pineapple and guava. The peel is so thin that each fruit must be hand snipped from the tree to avoid tearing. The entire fruit minus the stems and seeds can be used. It is hand processed and pureed or juiced and used in various products such as calamondin cake, coulis, marmalade, and jam. The peels can be dehydrated and used as gourmet flavoring with salt and sugar. The fruit was popular with Florida cooks in cake form from the 1920s to 1950s.[19]

Floridians who have a calamansi in the yard often use the juice in a summer variation of lemonade or limeade, as mentioned above, and, left a bit sour, it cuts thirst with the distinctive flavor; also it can be used on fish and seafood, or wherever any other sour citrus would be used.[20] 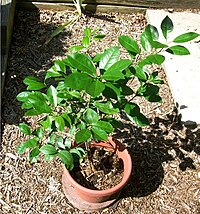 The Philippines is the only major producer of calamansi. It is primarily grown for its juice extracts which are exported to the United States, Japan, South Korea, Canada, and Hong Kong, among others. The Philippines exports between 160,000 and 190,000 metric tons of calamansi juice each year. Major production centers include the Southwestern Tagalog Region, Central Luzon, and the Zamboanga Peninsula.[21] Its cultivation has spread from the Philippines throughout Southeast Asia, India, Hawaii, the West Indies, and Central and North America, though only on a small scale.[22]

In sub-tropical and parts of warm temperate North America, ×Citrofortunella microcarpa is grown primarily as an ornamental plant in gardens, and in pots and container gardens on terraces and patios. The plant is especially attractive when the fruits are present.[23]

The plant is sensitive to prolonged and/or extreme cold and is therefore limited outdoors to tropical, sub-tropical and the warmer parts of warm temperate climates (such as the coastal plain of the southeastern United States (USDA zones 8b - 11), parts of California, southern Arizona, southern Texas, and Hawaii). Potted plants are brought into a greenhouse, conservatory, or indoors as a houseplant during the winter periods in regions with cooler climates.[24]

In cultivation within the United Kingdom, this plant has gained the Royal Horticultural Society's Award of Garden Merit[25] (confirmed 2017).[26]