The city Template:Convert north of Bacolod, is a gateway and a premier center of agro-fishery resources in Negros Island. The strategic location of the city, with a wide and rich island and marine resources and vast fertile agricultural land, and the completion of the commercial port and the construction of a fish port, will open a new opportunity for economic growth and competitiveness.

The city is a major sugarcane-producing area. This is transported to Victorias City for further refining. Another major source of livelihood is the harvest of seafood.

The Dinagsa Festival, a celebration which earned Cadiz the name of the Dinagsa Country of the north, is held annually on the last week of January. Some three kilometers off the coast of Barangay Cadiz Viejo is a white sand island resort of Lakawon, a popular destination among the local population.

The city was heavily damaged by Typhoon Haiyan, but has had success with restoration efforts to a stage where conditions are comparable to its pre-calamity status.

Cadiz City is also known as the City of Whales because in 1960, a number of whales washed to its shores in several different historical events. Cadiz traces its beginnings to the establishment of a traditional settlement in a place known as Cadiz Viejo, near the banks of the Hitalon River. Historical records showed that in 1861, the Spaniards came and named the settlement Cadiz because of its northern location which reminded them of the seaport by the same name in Spain.

Cadiz became a municipality independent from Saravia (now E.B. Magalona) in 1878. Its first appointed Gobernadorcillo was Antonio Cabahug, married to Capitana Francisca Cito. The outbreak of the Spanish–American War saw Cadiz take part in the insurrection. Her sons and daughters, headed by Francisco Abelarde, took up arms against their Spanish masters.

During the short-lived government of the cantonal state of the Federal Republica de Negros, Jose Lopez Vito was elected its president. At the onset of American rule, Cadiz was on its way to prosperity with the operation of two lumber companies in the area. The war years stopped these economic activities and brought much suffering to the people of Cadiz. The resistance movement and the local forces of the Philippine Commonwealth Army units put up the civil government in the mountains to deal with civilian affairs. In the post-war election of 1952, Joaquin Ledesma was elected mayor.

In July 1967, Cadiz was inaugurated as a city by virtue of Republic Act No. 4894 which was passed by Congress on June 17, 1967. The act was authored by Congressman Armando Gustilo.

In November 2013, the city was heavily damaged by the typhoon. Around 20,000 homes were damaged. In the island of Lakawon, from 250 homes, 10 was left standing. No casualties were reported in and around the city.

The island resort of Lakawon is part of Barangay Cadiz Viejo

Cadiz City is located at the northern part of Negros Occidental, 65 km away from the provincial capital of Bacolod City. The city is bounded to the north by the Visayan Sea, to the south by Silay City and Victorias City, to the east by Sagay City and to the west by the municipality of Manapla. It is located within the geographical coordinates of 10 degrees and 50 mins. Latitude NE and 125 degrees and 9 mins. longitude E.

The total land area by land use is 52,457 hectares. An area of 7,354.59 hectares is classified as urban land, which includes residential, commercial, industrial and institutional. 45,102.45 hectares are rural.

The city has reclaimed an area of 38 hectares, 500 meters southeast of City Hall. This area is found alongside of Hitalon River and is ideal for industrial activities.

The old seal of Cadiz, still registered by the NHCP

Hiligaynon is the major language of the city, with differences in tone and accent from the Hiligaynon used in Metro Bacolod. It is also mixed with a few Cebuano and Spanish words. Tagalog and English are widely taught but seldom used, however, both are frequently used in the academe and businesses.

The total annual income of the city for the year under review is P429,389,619. It is derived from the actual collections of local revenues and Internal Revenue Allotment (IRA).

The city has a total number of 4,965 business establishments, in which 4,750 of which are classified as commercial and 215 as industrial. It has 11 pawnshops, 16 lending corporation and five banking institutions which provide financial capital to businessmen.

The principal sources of livelihood are agriculture and fishing, with employment and business as a secondary source of income.

Fish supply is more than what the city currently needs. Being rich in natural resources and considered as one of the few fishing centers of Negros Occidental, Cadiz, rich in marine resources, is envisioned to be the seafood center of Negros and an alternative tourist destination. In Barangays Daga and Tiglawigan, for instance, dried fish processing and boat building are the major economic activities.

A P37 million multi-purpose seaport, still under construction, is envisioned to encourage both fishing and commercial vessels to dock in and use the area for trade and industry. This nationally funded seaport would create more jobs in the city.

Also located in the city is the Cadiz Solar Power Plant.

Office of the City Mayor of Cadiz City

The government health facilities of the city consist of a district hospital with 50 beds, an emergency clinic with 5 beds and 2 extension beds, a city health clinic, 22 Barangay health centers, and 43 school clinics. There are 5 private medical clinics, 3 private family planning clinics, 2 private optical clinics and 3 private clinical laboratories. The government's x-ray clinic and dental clinic further support the health facilities of the city. There are seven drugstores, two of which are open 24 hours a day.

The Philippine National Police has one headquarter located at the Villa Cristina Subdivision and 6 community police unit precincts located at Barangay Daga, Barangay Banquerohan, the Public Market, Fara-on Institute, Lacawon Island and Barangay Tiglawigan. There are 3 patrol vehicles and 3 motorcycles being utilized by the police force.

Considering that the police force ratio to the populace is not sufficient, the Civilian Volunteers Organization (CVO) was created to augment the policemen. Today, there are 40 members of CVO serving alongside the policemen of the city.

As of 2007, the Bureau of Jail Management and Penology has 8 personnel and 126 inmates. It is located in Barangay Tinampaan.

The Bureau of Fire Protection, as of 2007, has 2 serviceable fire trucks and 24 firemen and personnel. Of these, 11 are nationally funded, including the Inspector. The other 13 are locally funded. The ratio is 1:6,226. This is higher than the standard 1 fireman per 2,000 population. Inferring from this, the city needs 50 more firemen and personnel. The development of the Busac-Busac Spring, the city has 23 serviceable fire hydrants located at different strategic locations.

Cadiz City is a one-hour drive from Bacolod City, the capital of Negros Occidental, by private car and an hour and fifteen minutes ride by a passenger bus. The Vallacar Transit (Ceres), the largest bus company, has a terminal here. Buses plying to San Carlos, Dumaguete City, and the nearby municipalities make short stopovers here. Other services of transportations available are PUJ and van for hire vehicles. Cadiz City is also accessible to Cebu via the cities of San Carlos and Escalante. Passenger buses for Cebu also pass by at the bus terminal on scheduled trips.

The existence of communication facilities in any area plays a vital role in economic development. These facilities lessen the cost of transportation and likewise shorten the time in transacting business. Cadiz City has a Bureau of Telecommunications and a post Office located at the City Engineer's Compound. There is also an air cargo service in the city. Two private companies, the JRS and LBC, also deliver mail. Unlike the post office, home mail delivery of these private companies reaches the rural areas.

Two telephone companies operate in the city, the Philippine Long Distance telephone Company located along Villena Street with a capacity of 1,500 lines and the Globe Fiber Optic Backbone Network support facility located along Cabahug Street. Cellular sites of Smart, Globe and Sun are also found in the city to cater for the wireless telephone system. The city has also five internet cafes.

Cadiz has one satellite cable station. COMSATEL Cable TV located at San Eusebio Subdivision, Barangay Zone 2. It caters to six urban barangays, including parts of Barangay Daga and offers 45 channels to choose from. By using ordinary antennas, 3 television channels (12, 6 and 4) are viewed and received.

The city has one FM radio station located at Villa Barbas, Barangay Zone 2, with a broadcast power of 104.5 kHz. Cadiz also receives broadcasts from stations in Bacolod, Manila, Cebu, Iloilo and other nearby provinces or towns and cities. The broadcasts are either in English, Hiligaynon, Cebuano and Filipino.

There used to be two ferry boats of private company transporting cargoes and passengers to and from Bantayan Island. 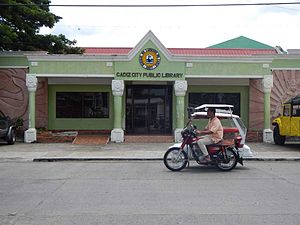