Caballo Island (which means "Horse Island" in Spanish) is a bluff, rocky island located at the entrance to Manila Bay in the Philippines. It is about Template:Convert long with the highest elevation at 381 feet high. Caballo, along with the larger Corregidor (2 km to the north), divides the entrance to the bay into two broad and deep channels, known as the North and South Channel.[1]

The whole island was formerly occupied by Fort Hughes, a U.S. defense fortification before World War II. It was heavily bombed during the war.[2]

Caballo and Corregidor Islands are believed to be the rims of the Corregidor Caldera.[3] The gap between the two islands is only about 1/4 mile with a depth of 7 fathoms and is never used for large vessel navigation.[1]

In November 2014, Filipino peacekeepers from Liberia who were quarantined on the island for 21 days due to concerns about Ebola were cleared to return to the mainland. At that time West Africa was having an outbreak of the disease.[4]

The island is currently occupied by the Philippine Navy and is off limits to civilians. Remains of the old fortifications, batteries and structures are left rusting in the open after it was abandoned after World War II.[2] 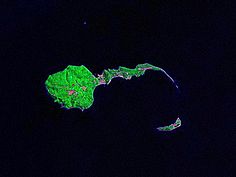