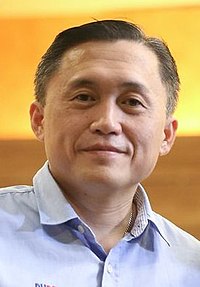 Christopher Lawrence "Bong" Tesoro Go (born 14 June 1974) is a politician. He is currently a senator, having been elected in 2019 after campaigning as part of the senatorial lineup of the administration of President Rodrigo Duterte. From June 2016 to October 2018, he was part of Duterte’s cabinet as his special assistant and as head of the presidential management staff. Go has been Duterte’s personal aide since 1998. He is the chairman of the Senate committee on health and demography.

On 2 October 2021, Go filed his certificate of candidacy for the 2022 vice-presidential election. He is running under Partido Demokratiko Pilipino-Laban (PDP-Laban).[1]

Bong Go was born on 14 June 1974 in Davao City to businessman Desiderio Go and Marichu Tesoro. His maternal grandfather was August Tesoro, whose father was a player in the printing industry in Davao City. Go earned a bachelor’s degree in management from De La Salle University.

Go has been Rodrigo Duterte’s personal aide and executive assistant since 1998, when Duterte was in his second term as mayor of Davao. He has handled both personal and official matters on behalf of Duterte.

Upon being elected president, Duterte announced that Go would serve as special assistant to the president. In this role, Go provided general supervision to the presidential management staff.

While serving in this capacity, Go was alleged to have interfered in the Philippine Navy’s frigate deal. According to news outlet Rappler, pertinent documents detailed how Go interfered in the procurement process and violated laws by endorsing a supplier outside the bidding process.[2] Go denied the allegations, claiming he would resign from his position in the cabinet if he would be found guilty. Vice Admiral Ronald Mercado, who was removed from his post as chief of the Philippine Navy after questioning the frigate deal, cleared Bong Go of the allegations. Duterte defended his aide, saying Go “owns a yacht, therefore he doesn't need to steal in the frigate deal."[3]

After months of being accused of premature campaigning, Go filed his certificate of candidacy on 15 October 2018 for his bid for senator in the 2019 elections.[4] His platform included the repeal of the Juvenile Justice law, where the minimum age of criminal liability is set at 15 years old. Go placed third in the election.