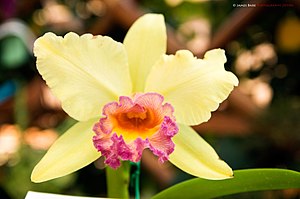 Blc Cory Aquino orchid (Brassolaeliocattleya Cory Aquino) is a variety of orchid bred by former Justice Secretary, Hernando "Nani" B. Perez. It was intended to honor Corazon "Cory" Aquino, after whom it was named.

As a tribute to Cory Aquino

Perez says "This was my way of expressing my admiration for former president Cory, and I thought it was just right because the plant was bred from an orchid variety called Ninoy Aquino. And also because it is the color yellow." The color yellow was widely associated with both Ninoy and Cory Aquino. Flowers were also one of the Aquino's favorite subject in painting.

According to Perez, "[this orchid] symbolizes strength of character because it is a sturdy plant. Pirmeng naka-tindig yun eh. Pirmeng proud. It is also feminine-looking but with a strong-bearing. Its petals are pink which means it is long-lasting."

Perez was able to give a pot of his best Blc Cory Aquino orchids before Aquino died on August 01, as well as the registry certificate of the plant from the Royal Horticultural Society, a London-based international group that registers orchid hybrids.

An avid orchid breeder since 1974, Perez was named honorary chairman of the Philippine Orchid Society (POS). He registered the Blc Cory Aquino with the Royal Horticultural Society's orchid registry in 2004.

Priced at P1,500, the Blc Cory Aquino orchid boasts of its large varieties and its being a consistent recipient of numerous horticultural awards. It won the "Best Philippine Hybrid" award at the Flora Filipina Expo in 2007, which is considered as the highest award that a Philippine orchid breed can get.