The Bicolano people or the Bikolanos (Bikol: Mga Bikolnon) are the fourth-largest Filipino ethnolinguistic group.[1] Males are usually referred to as Bicolano and Bicolana is used for females. Their native region is commonly referred to as Bicolandia, which comprises the entirety of the Bicol Peninsula and neighbouring minor islands, all in the southeast portion of Luzon.

They are largely an agricultural and rural people, producing rice, coconuts, hemp, they are rich in spices. That's why Bicolanos are said to be great when it comes to eating chili food or foods which are high in spice. Nearly all of them are Christians, predominantly Roman Catholics, but with some Protestant minorities. Proves that they celebrate Saints, and other patriots. Their languages are divided based from their cities, which is actually a collection of closely related varieties, is closely related to other languages of the central Philippines, all of which belong to the Austronesian (specifically Malayo-Polynesian) super-family of languages.[2] 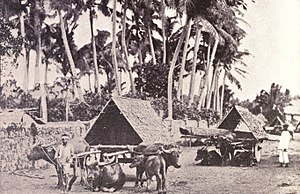 According to a folk epic entitled Ibalong, the people of the region were formerly called Ibalong or Ibalnong, a name believed to have been derived from Gat Ibal who ruled Sawangan (now the city of Legazpi) in ancient times. Ibalong used to mean the "people of Ibal"; eventually, this was shortened to Ibalon. The word Bikol, which replaced Ibalon, was originally Template:Transl (meaning "meandering"), a word which supposedly described the principal river of that area.

Archaeological diggings, dating back to as early as the Neolithic, and accidental findings resulting from the mining industry, road-building and railway projects in the region, reveal that the Bicol mainland is a rich storehouse of ceramic artifacts. Burial cave findings also point to the pre-Hispanic practice of using burial jars.

The Spanish influence in Bicol resulted mainly from the efforts of Augustinian and Franciscan Spanish missionaries. Through the Franciscans, the annual feast of the Virgin of Peñafrancia, the Patroness for Bicolandia, was started. Father Miguel Robles asked a local artist to carve a replica of the statue of the Virgin in Salamanca; now, the statue is celebrated through an annual fluvial parade in Naga City.

The flag of the members of Katipunan in Bicol.

Bicolanos actively participated in the national resistance to the Spanish, American, and Japanese occupations through two well known leaders who rose up in arms: Simeón Ola and Governor Wenceslao Q. Vinzons.[3] Historically, the Bicolano people have been among the most rebellious against foreign occupation, as a result the region was very hard to control until the end of World War II.[3]

Bicolanos live in Bicol Region that occupies the southeastern part of Luzon, now containing the provinces of Albay, Camarines Norte, Camarines Sur, Catanduanes and Sorsogon, as well as Masbate (although the majority of Masbate's population are a subgroup of Visayans). Many Bicolanos also live in the southeastern towns of the Calabarzon province of Quezon.

Bicolanos number 6,299,283 in 2010.[4] They are descended from Austronesian peoples who came from Taiwan during the Iron Age. Many Bicolanos also have some Han Chinese, Arab, and Spanish admixtures. Most of the townsfolk have small traces of each heritage while their language is referred to as Bicol/Bicolano. The Bicolano language is very fragmented, and its dialects are almost mutually incomprehensible to speakers of other Bicolano dialects. The majority of the Bicolano people are Roman Catholics and Catholic Mass is celebrated daily in many of the Bicol Region's churches. However there are also a sizable number of Muslims in Bicol.Template:Citation needed 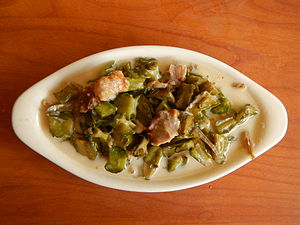 The Bicolano cuisine is primarily noted for the prominent use of chili peppers and gata (coconut milk) in its food. A classic example is the gulay na lada, known outside the region as Bicol Express, a well-loved dish using siling labuyo (native small chillies) and the aforementioned gata. Meals are generally rich in carbohydrates and viands of vegetables, fish, and meat are cooked in various ways. Bicolanos almost always cook their vegetables in coconut milk; for meat recipes such as pochero, adobo, and tapa. A special meat dish is the dinuguan. Fishes that serve as common viand are mackerel and anchovy; in Lake Buhi, the sinarapan or tabyos (known as the smallest fish in the world) is common.

Coconut and abacá are two dollar-earning products that are grown in the coastal valleys, hillsides, or slopes of several fertile volcanoes respectively. The Bicol River basin or rice granary provide the peasants rice, corn, and root crops for food and small cash surplus when crops evade the dreaded frequent typhoons. For land preparation, carabao-drawn plough and harrow are generally used; sickles are used for cutting rice stalks, threshing is done either by stepping on or beating the rice straws with basbas and cleaning is done with the use of the nigo (winnowing basket).

To suit the tropical climate, Bicolanos use light material for their houses; others now have bungalows to withstand the impact of strong typhoons. Light, western-styled clothes are predominantly used now. The typical Bicolano wears light, western-styled clothes similar to the Filipinos in urban centres. Seldom, if ever, are there Bicolanos weaving {{transl|bik|sinamy{{transl|bik| or piña for clothing as in the past; Template:Transl is reserved now for pillow cases, mosquito nets, fishing nets, bags and other decorative items.[3]

Bicolanos celebrating the Magayon Festival. The festival is held in Albay, where the Mayon Volcano is located, every April.

Bicolanos observe an annual festival in honour of the Our Lady of Peñafrancia every third Sunday of September. The City of Naga comes alive. During the celebration, a jostling crowd of all-male devotees carries the image of the Virgin on their shoulders to the Naga Metropolitan Cathedral, while shouting Viva La Virgen! For the next nine days people, mostly Bicolanos, come for an annual visit light candles and kisses the image of the Virgin. To the Bicolanos, this affair is religious and cultural, as well. Every night, shows are held at the plaza the year's biggest cockfights take place, bicycle races are held and the river, a lively boat race precedes the fluvial procession. At noon of the third Saturday of the month, the devotees carry the Image on their shoulders preceded to the packed waterfront. On the ninth day of the festivities, The The Virgin of Peñaffrancia is brought to her home, to the Minor Basilica of the Our Lady of Peñafrancia via a grand fluvial procession in the Naga River. This celebration of Bicolanos is considered one of the largest Marian celebrations in Asia.[5]