Bibingka is a type of baked rice cake from the Philippines. It is usually eaten for breakfast, especially during the Christmas season. It is traditionally cooked in clay pots lined with leaves. It is a subtype of kakanin (rice cakes) in Philippine cuisine. Bibingka is also found in East Timor and Christian communities in eastern Indonesia. 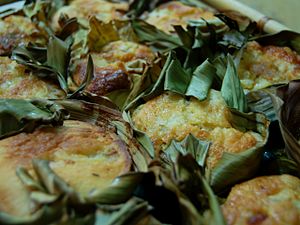 The original method of preparing the glutinous rice used in bibingka is known as galapong (commonly incorrectly translated as "rice flour"). It is an ancient tradition unique to the Philippines and related Austronesian regions. It is essential for most Philippine rice desserts. Unlike in other Asian cuisines, the rice is not prepared dry. Rather it is soaked overnight in tapayan jars and are usually allowed to ferment by the addition of wild yeast called bubod or with tuba palm wine. The rice is then ground into a thick paste using stone mills before being cooked. This gives a characteristically slightly sour aftertaste in Filipino traditional rice cakes. The same process (tapay) when extended for longer periods result in traditional rice vinegars and rice wines.[1][2][3]

The shared origins of bibingka from the Philippines and Indonesia is widely acknowledged. Especially given that the Indonesian bibingka is from Eastern Indonesia, the regions closest to the Philippines with the most closely related cultures.[5][6]

Some authors have also proposed a connection between the Goan dessert bebinca (or bibik) and the Southeast Asian bibingka due to the similarity in names. They believe that the Portuguese may have introduced it to Southeast Asia from Goa. But this is unlikely, given that the Philippines, where bibingka is most widely known, was never a colony of Portugal. They are also very different; the Goan dessert is a type of layered coconut pudding (similar to Filipino sapin-sapin and Indonesian kue lapis), while bibingka is a simple baked glutinous rice cake. The only similarity is that bebinca and bibingka both use coconut milk.[5][6] Rice-based dishes are also far more diverse in Southeast Asia, where rice is an ancient Austronesian staple crop. Thus it is more likely that the Portuguese introduced the term to Goa from the Philippines, rather than the other way around. Similar to how the art of windowpane oyster shell windows were also introduced from the Philippines to Goa (they are still called capiz in Goa after the Philippine province of Capiz).[7]

Bibingka is a traditional Philippine Christmas food. It is usually eaten along with puto bumbóng right after the Simbang Gabi ('Night mass', the Filipino version of Misa de Gallo).[8] They are sold outside of churches during the nine-day novena for worshippers to eat for breakfast.

As of October 9, 2007, the town of Dingras, Ilocos Norte in the Philippines is expecting a Guinness World Records certification after baking a kilometer-long cassava bibingka made from 1,000 kilos of cassava and eaten by 1,000 residents.[9] Also, in the municipality of Baliuag, Bulacan, bibingka is served along with salabat (ginger tisane) and the stores selling them serve them for free.

Bibingka is traditionally made with galapóng (slightly fermented soaked glutinous rice ground into a paste) and coconut milk or water. Modern versions sometimes use regular rice flour or Japanese mochiko flour. Other ingredients can vary greatly, but the most common secondary ingredients are eggs and milk. The traditional preparation is very time-consuming. A specially made terra cotta container is lined with a single large section of a banana leaf. It is placed over preheated coals and the rice flour and water mixture is poured into it, taking care not to spill it into the container itself. Another piece of banana leaf is added to the top and covered with more preheated coals.

The end result is a soft and spongy large flat cake that is slightly charred on both surfaces and infused with the unique aroma of toasted banana leaves. Toppings are then added, usually consisting of butter/margarine, sugar, cheese, or grated coconut. Other more uncommon toppings include pinipig (pounded immature rice grains), pineapple, and salted duck eggs.[10] A mixture of two or more of these toppings on a single bibingka are also common. Bibingka with sumptuous amounts of toppings (and ingredients) are sometimes called bibingka especial.

More modern methods involve bibingka being baked in an actual oven inside a caldero or ordinary cake pans. The result lacks the distinctive smoky smell of charcoal but is otherwise the same, especially if banana leaves are also used to line it. Mass-produced bibingka in Philippine bakeries are also made using characteristic tin molds that give them a crenelated shape similar to large puto or puto mamon (cupcakes).

Bibingka is best served hot. Large bibingka can be sliced (or torn) into several wedges and can serve 4 to 6 people.

Bibingka has a soft spongy texture similar to puto, another Philippine rice cake. It is eaten hot or warm and is slightly sweet with a taste very similar to rice pudding. The top and bottom surfaces (including the traditional banana leaf lining) are also usually charred, adding to the flavor.

Bibingka is also used as a general term for desserts made with flour and baked in the same manner. The term can be loosely translated to "[rice] cake". It originally referred primarily to bibingka galapong, the most common type of bibingka made with rice flour. Other native Philippine cakes have also sometimes been called bibingka. These may use other kinds of flour, such as corn flour, cassava flour, or plain flour, and are usually considered separate dishes altogether.[11] Bibingka can also be made with uncommon ingredients, including chocolate.

Bibingka or bingka is also popular in Indonesia, particularly among Christian-majority areas in northern Sulawesi and the Maluku Islands, both of which were former colonies of the Portuguese Empire and are geographically close to the southern Philippines. It is prepared almost identically to Philippine bibingka. In the provinces of North Sulawesi and Gorontalo, bibingka is usually made with rice or cassava flour and coconut milk with shredded coconut baked inside. In the Maluku Islands, bibingka is spiced and sweetened with brown sugar or sweet meat floss. It is also traditionally cooked in clay pots lined with banana, pandan, or nipa leaves. As in the Philippines, it is also usually eaten during the Christmas season.

A pancake-like variant of bibingka was introduced to the Chinese Indonesian communities of East Java during the Dutch colonial period. Known as wingko, wiwingka, or bibika, it became popular throughout the island of Java.